It's been so long since I have written that I don't know whether to give a "Where We've Been--for the last 6 months" post (yes, it has been that long!), a "What's on My Heart" post or just not even bother!

I'm ruling out the last one because I'm not ready to shut this thing down quite yet. If I'm being totally honest, I have gone back and forth between giving up on writing or continuing on with it. After reading the chapter titled "Run Your Race" in Jen Hatmaker's new book For the Love, I'm going to stay faithful to do what I can, even if I'm not that consistent with posting material because I think it's being used in some way or another. Even if it only resonates with a handful of people (and by people I mean probably only those who share DNA with me), for that handful, I think (hope??) it is worth it.

I can't really say we've had a lot of big changes in our life in the last 6 months. Certainly compared to the events of 2010-2012 (miscarriage, cancer, all the stuff with Luis' career, moves), life has been pretty quiet for us--or at least as quiet as it can be with two little ones.

Probably the biggest changes for us have been 1. We bought house, making us really, really real adults and 2. Eli started preschool.

Two months in and I am still in denial that he is old enough for this. 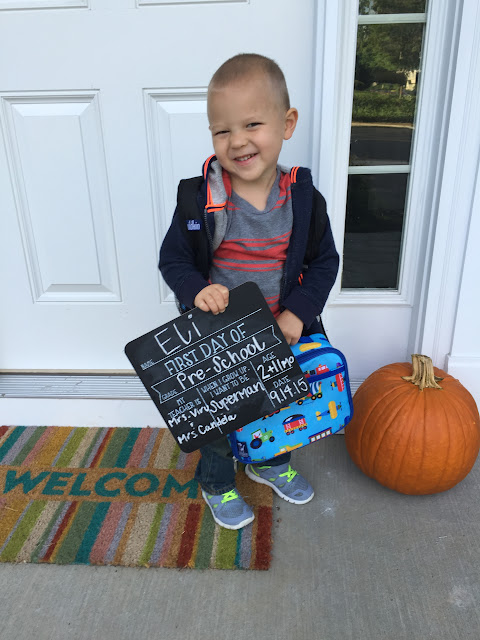 We have entered the world of backpacks and lunch boxes and school folders. We are participants in the morning scramble to eat breakfast and don appropriate attire and pack a nutritious snack and gather all necessary paperwork before rushing out of the door to get to school on time. We attended Parent's Night. Parent's Night!?! How are we already at this stage of parenting??

The excitement leading up to his first day had been building for months but what I didn't expect was the ache that I would feel when I went home to a quiet house with just Olivia. Obligatory "I just dropped my firstborn off at school" tears were shed in the parking lot, not out of sadness necessarily but out of the realization that there's no going back. Once this whole school thing kicked off, that was it. We set something into motion this year that will never stop and will, in fact, only pick up speed as the years go on. 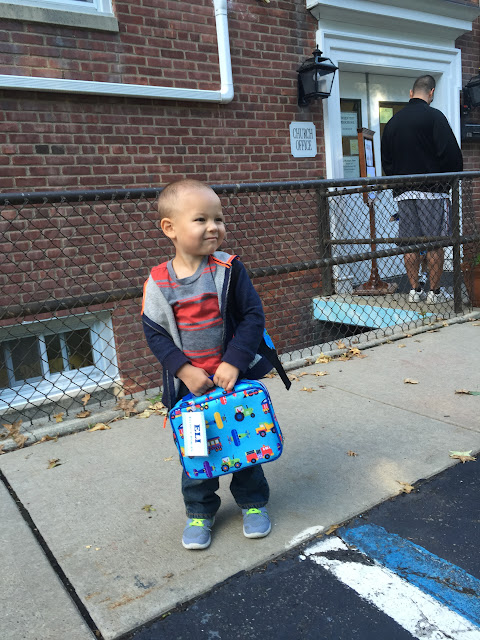 The season of having him home with me all day, every day, is done. Over. Just like that. Yes there are still days where he is home, it is only part time preschool after all, but it will never be like it was before.

For the last 3 years, I was the one person he spent most of his time with. Before September, I could have counted on two hands the number of days I spent away from him. He says things like I say them and mimics things I do because I was the only one who had been with him day in and day out from day one. I was one of only a few influences on his life.

All of that has changed though. Monday-Wednesday, he learns from someone else. He is exposed to other children who are different from him. He follows someone else's rules. He has experiences that don't involve me (this is the hardest one for me--insert crying Emoji). He comes home singing songs I don't know, saying new phrases and words (some not so desirable) he learned from kids I've never met. For 2.5 hours, 3 days a week, he does and says and learns things that I do not do or hear or learn with him.

In a very small way, he has begun his journey of living his life apart from me. (insert a million crying Emojis)

One of the greatest things I ever read in a parenting book was that the majority of your child's life will be lived independently from you. We only have them for 18 years, just a fraction of their lives, before they are off and running their own race. In light of that, our job as parents is to prepare them from day one for that moment when they fly the coop. We must do everything we can to teach them to be independent, responsible adults who will be ready to run that race and to run it well.

That is a truth that is exciting and yet hard to accept all at the same time.

Life is filled with these kind of things though, no? The bittersweet emotions of change and reality. We all have things in life that we look forward to and yet dread at the same time. We experience seasons that we mourn the end of while simultaneously rejoicing the beginning of another.

School is very much in that category for us--an exciting and welcomed change and a hard one all at the same time. 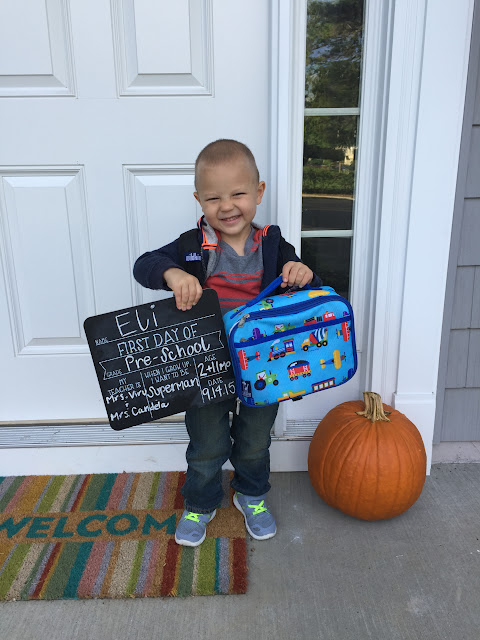 I am thankful for changes and the way they grow and stretch us and pray that this little change in Eli's routine will be the beginning of him learning to grow and stretch his own little wings outside of our home, even though that means that some day he will not be in our home (a million more crying Emojis).

Your children may not be in school. You may not even have children. But I would guess that at some point you have experienced change, if not at the moment. Whatever your change of season, past, present or future, may you embrace the difficulty of a chapter ending and discover the excitement of a new one beginning!

Now, gotta hurry off to get that little guy ready...

Hey Cara,
Nope, it's not just family who's reading your posts ;)
I love to see how your lives developed the way they did and it's an encouragement. God is faithful :)
Hope to see you soon!