I am failing miserably at recapping our British Isles trip. There's just soooo much and so many pictures. It's hard to condense it down into something that won't overwhelm you. While I keep plugging away at it, here is a run down on the quick trip we took last weekend.

Luis had a weekend off. WHAT??? That rarely happens. A whole weekend. And a long one at that. Friday, Saturday AND Sunday. After debating whether to get away or stay home, we finally settled on both: getaway for a night, stay for a night.

Most people take a "Baby Moon" before the little creature that has been inhabiting mama's belly for more than half the year pops out and turns their world upside down. For us, that just wasn't in the cards. Not having family nearby, it's hard to find a sitter for an evening out, let alone a full weekend away. So we took a "Mini-Moon" with our mini. "Family Moon" perhaps?

And you know what? It was perfect. Not only was it great having a change of scenery, but it was an unexpected blessing spending that extra time, just the three of us, away from the routine of life. What started as a quest for lobster rolls, ended up being a sweet time for our family, savoring every moment with one another, giving each other our undivided attention, cherishing Eli's joyful spirit, his big smiles and belly laughs, the adorable way he runs, his excitement for anything and everything. We were completely present and in the moment. We soaked it all in and wished it would never end. 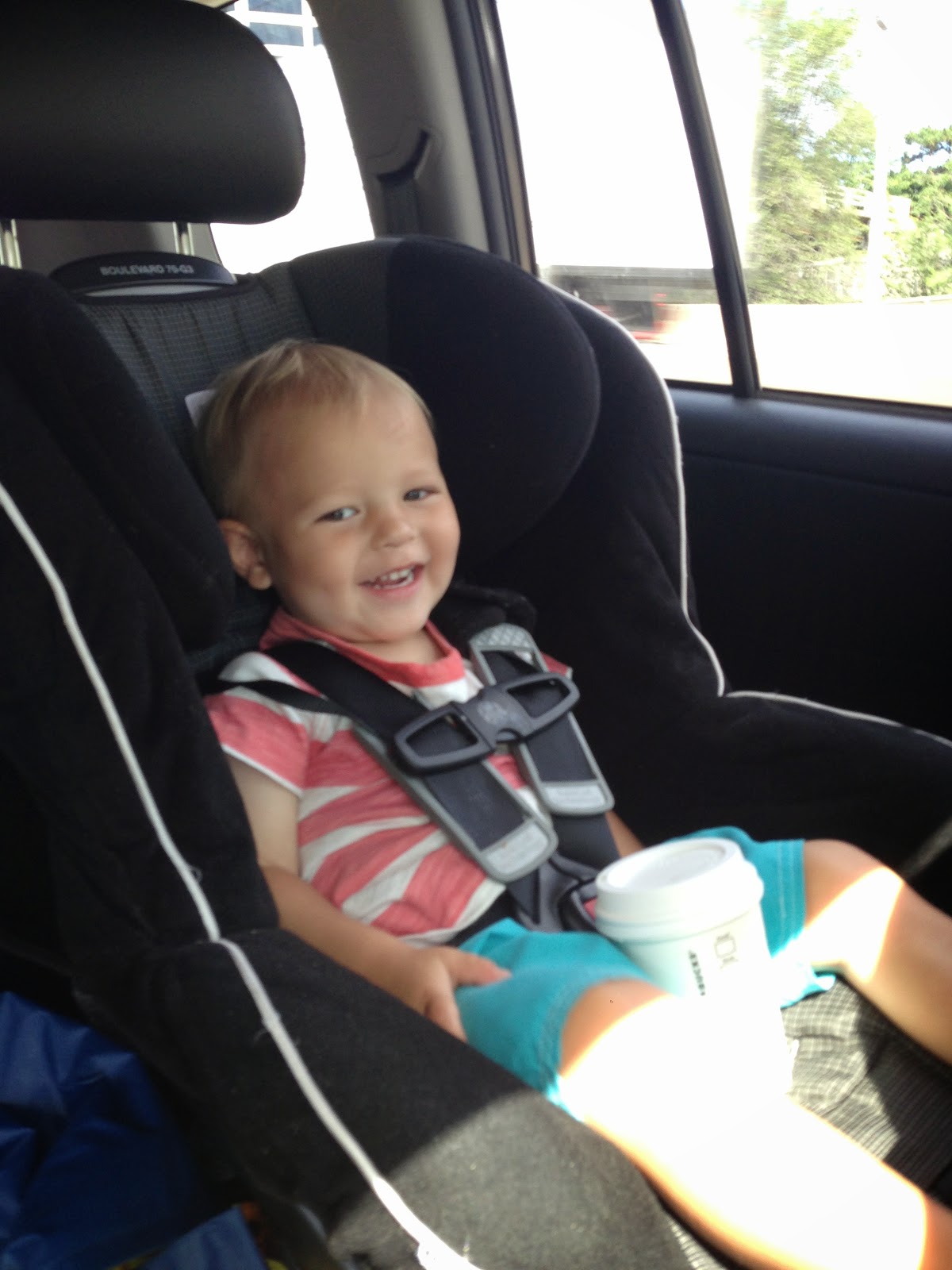 We sat in awe at this sweet boy, who God entrusted to us, and marveled at what a gift it is to be his parents. We have become fully aware lately of the bittersweet reality that he is growing up so fast. With each passing day he shows to be more of a little boy than a baby and all we can do is grasp to hold on and desperately try to slow down every single second we have. 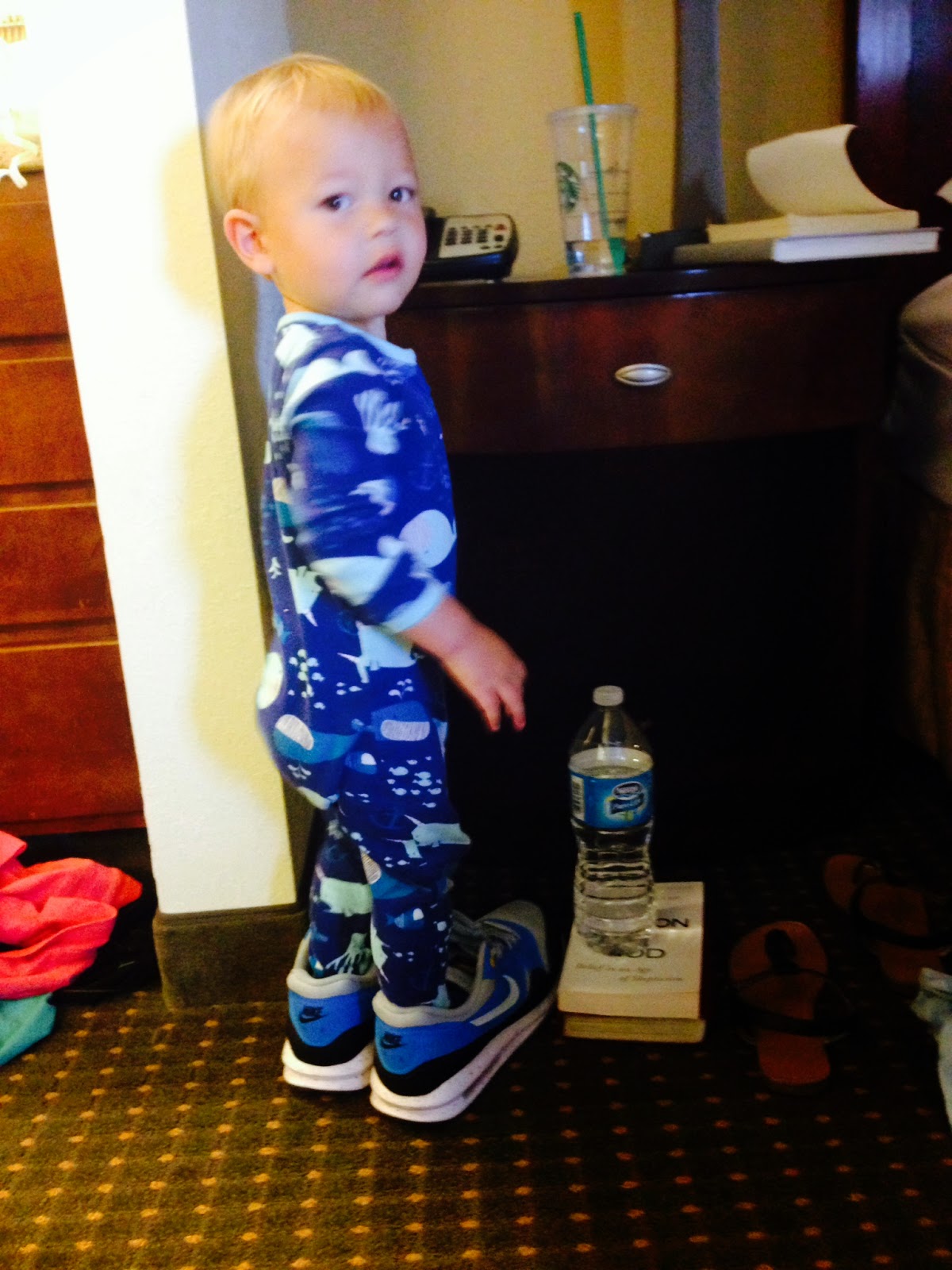 There are no words to describe the love you have for your child. I had no idea it would be this intense. I had no idea either how much my love for Luis would grow through us having a child together. Not just in the fact that this little life came from us, but in watching the way he loves our son, the way he teaches and instructs him and the way Eli looks up to and adores Luis. Sometimes my heart just can't take it. 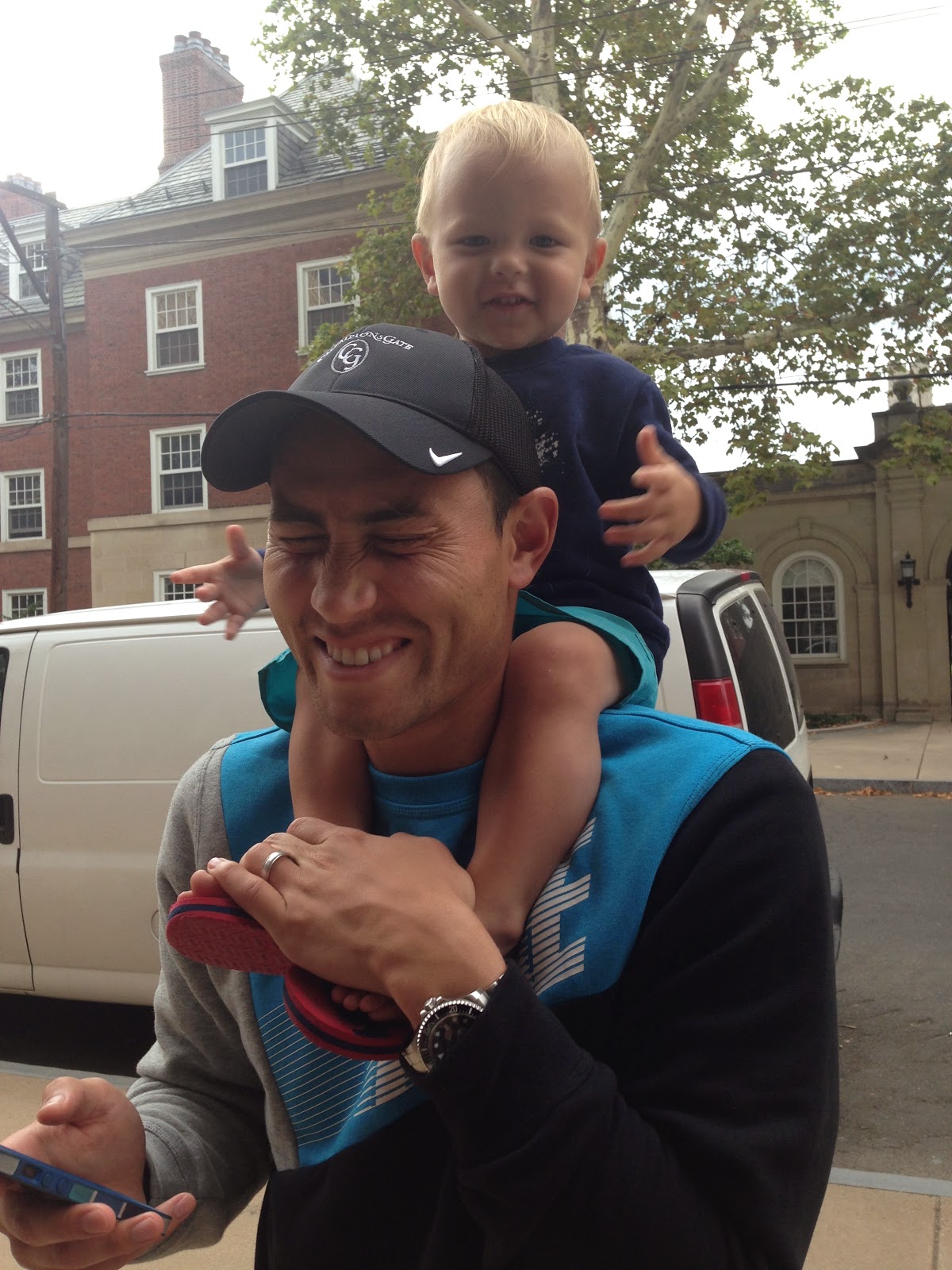 Now that I've gushed my heart all over the place, I guess I should probably tell you what we actually did. We chose a place that was less than 2 hours away and had lobster rolls. Those were our criteria. Based on that and this list, we settled on New Haven, Connecticut.

Our first stop was the Lobster Hut, a little gem we discovered online when searching for the best lobster rolls in Connecticut. 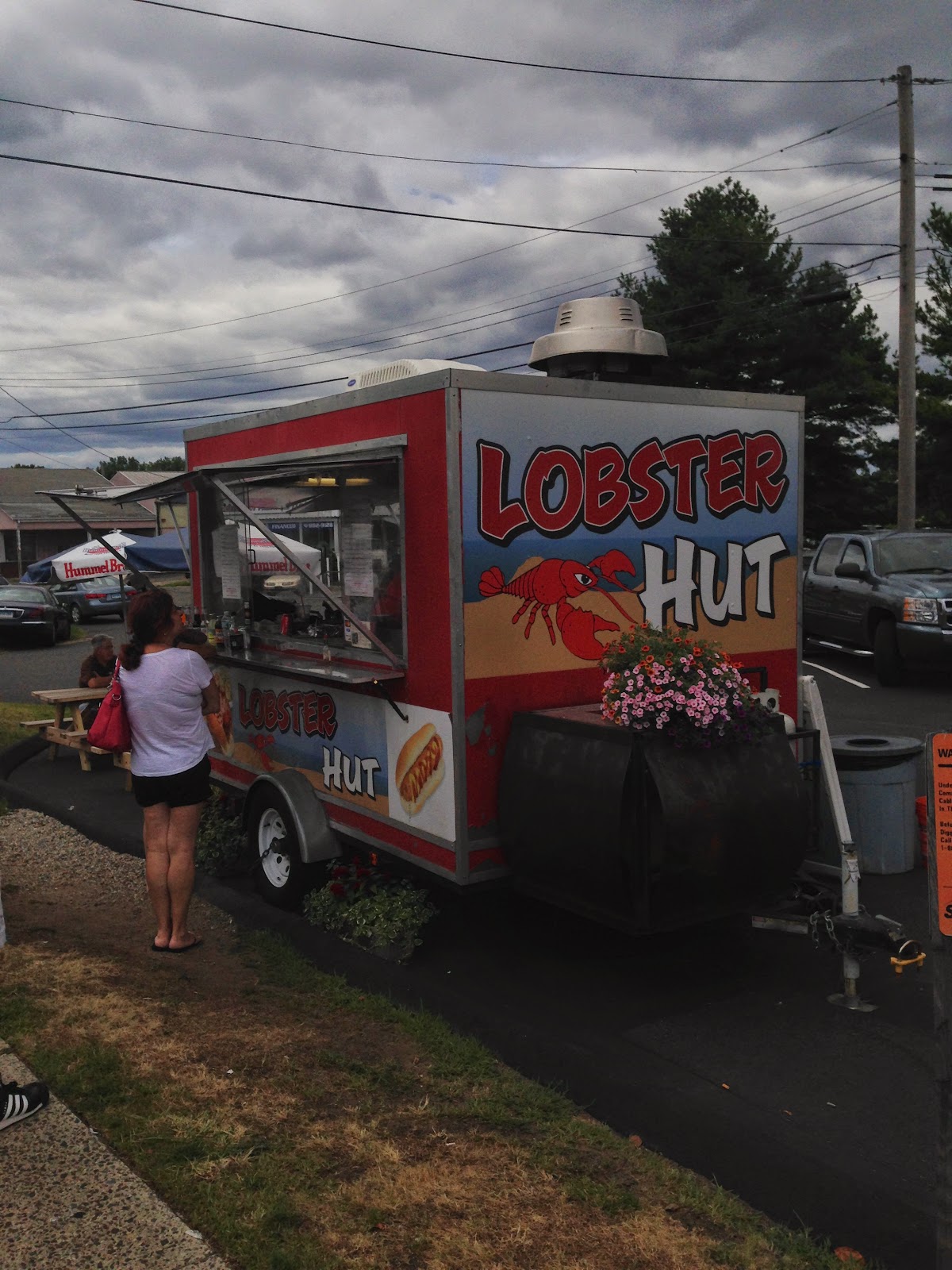 The truck is located on the side of a busy road, in the parking lot of Valvoline Instant Oil Change, across from a Land Rover dealership and a Stop and Shop. The odd location doesn't deter hungry patrons as there was a steady line the whole time we were there. Often they sell out before closing.

So did it live up to the hype we read? 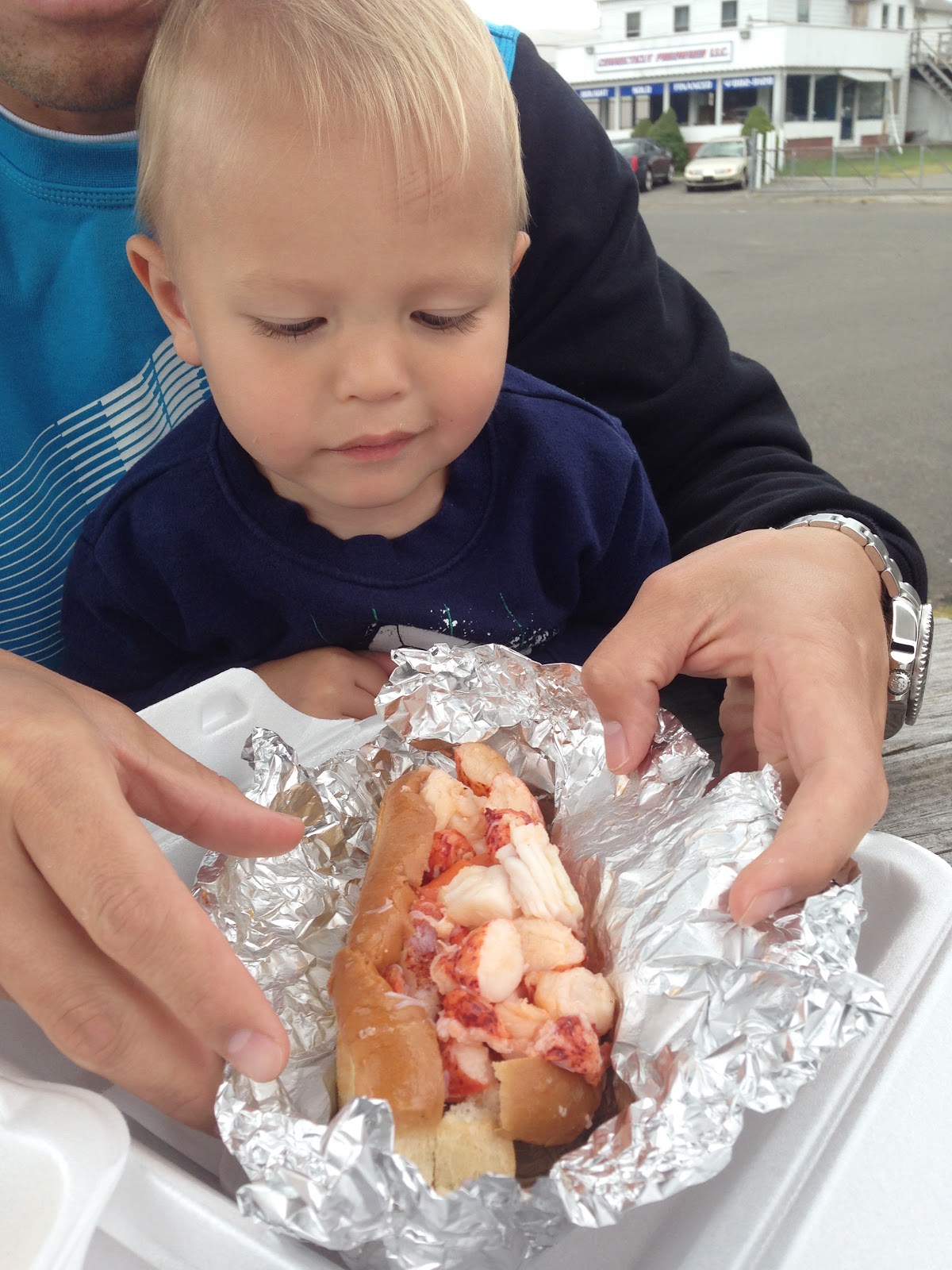 Oh yeah. Not only did it live up to the hype, but The Lobster Hut exceeded it with their personable and welcoming staff. There were regulars who were known by name and were told they could "just grab a water out of the cooler in the back" and even though it was our first time, we still felt just as welcome as if we went there every day. They said hello and smiled and made small talk. Never did the long line and non-stop work seem to stress them out. They were cool and calm and made sure to take time for each and every person.

You can get a regular or an extra large lobster roll. The XL is on the same size bun, just more meat. Can it get any better than that? Not into the bun? You can just get a cup of buttery lobster. Yum. French fries, onion rings and slaw for side options. And if lobster's not your thing, there are hot dogs as well.

After we stuffed our faces we headed to Silver Sands State Park which was really close to the Lobster Hut for some time at the beach. Lucky for us, it was a cloudy and cool morning so just as we were arriving, the majority of people were leaving. 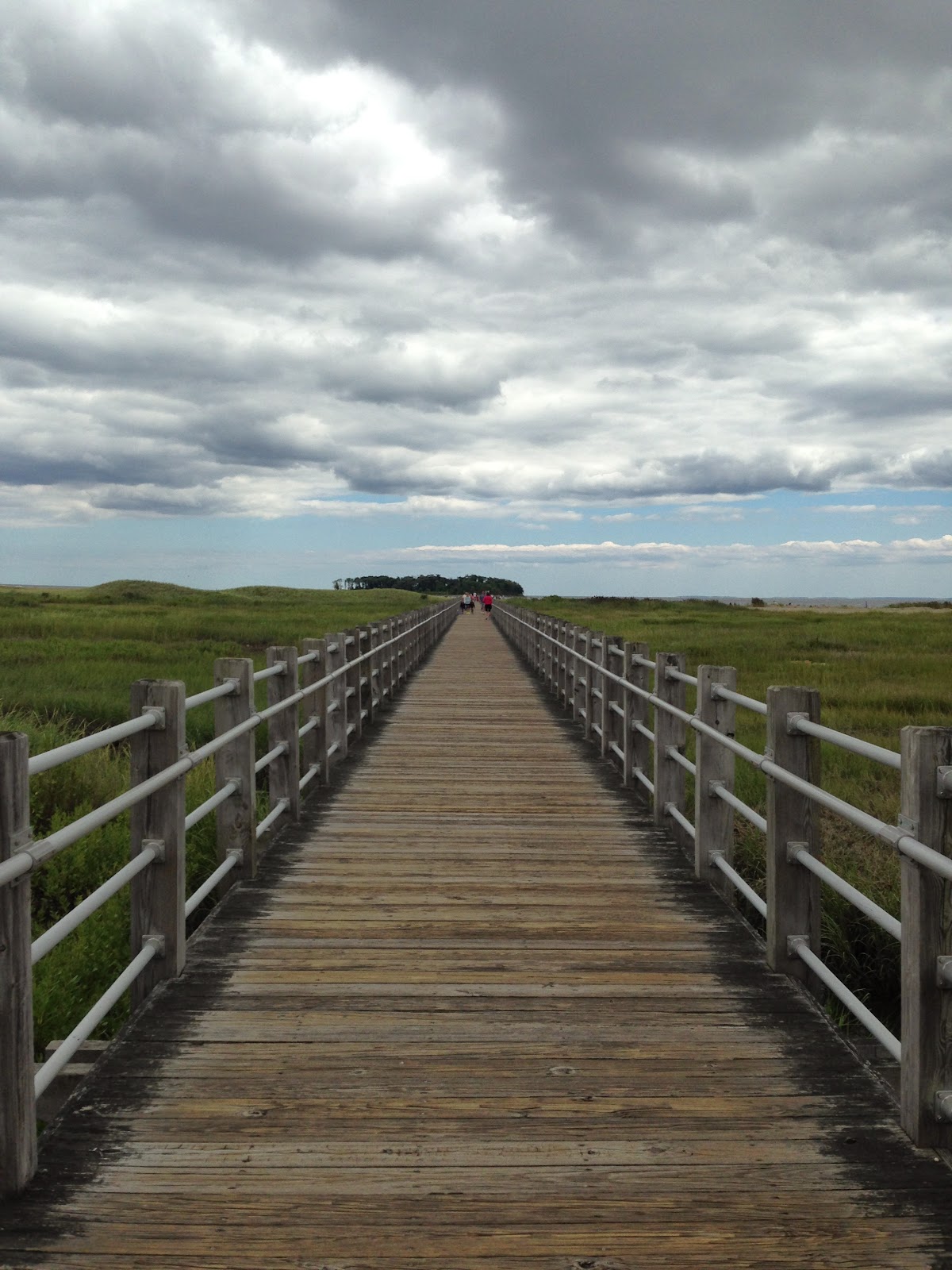 Unlike the Jersey Shore, this beach was peaceful, not crowded and it was FREE. 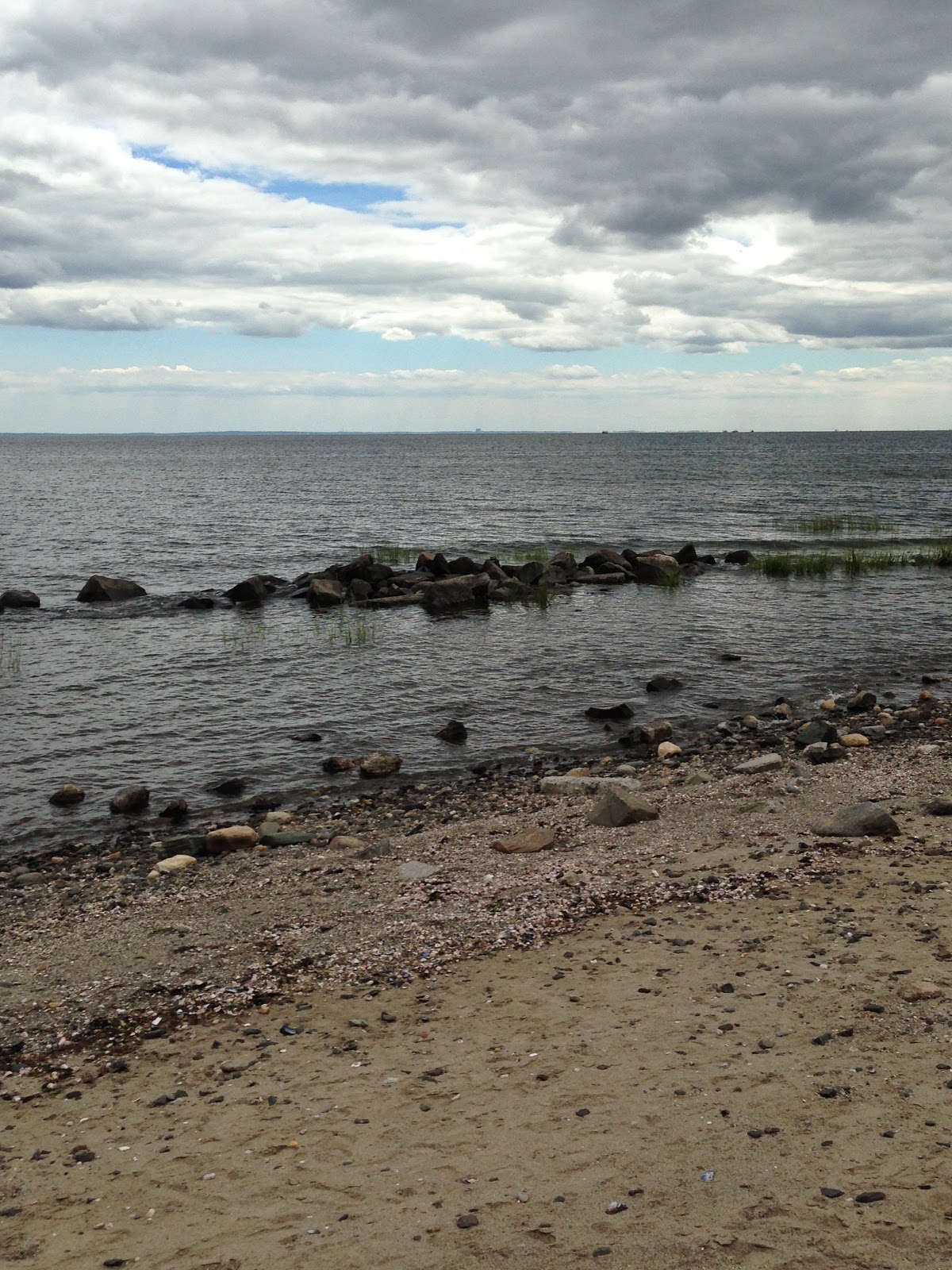 It's definitely more of a rocky beach which may be tough for laying out so if you're looking for that, this may not be your spot. 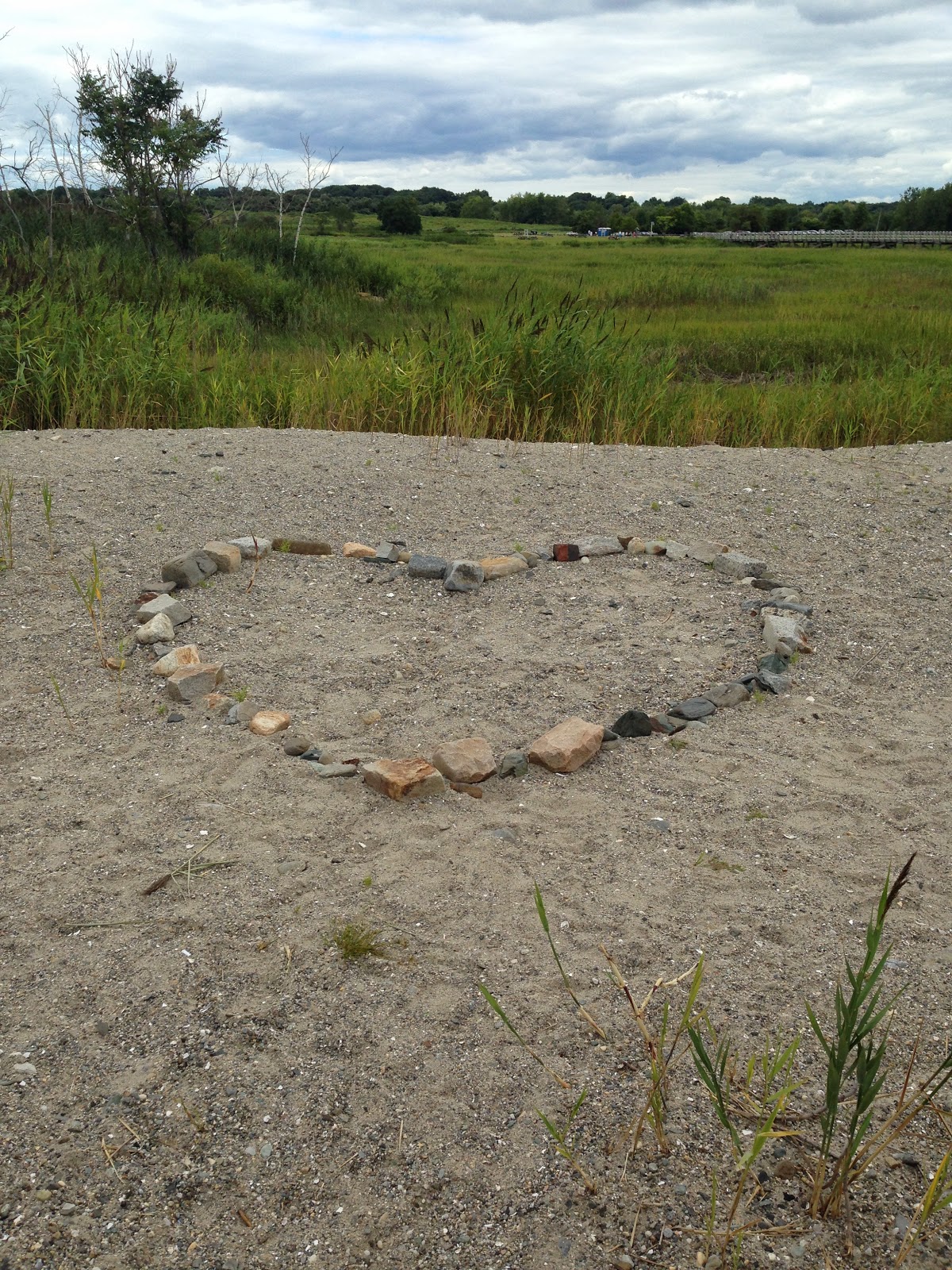 But if you're looking for a beautiful place to walk, 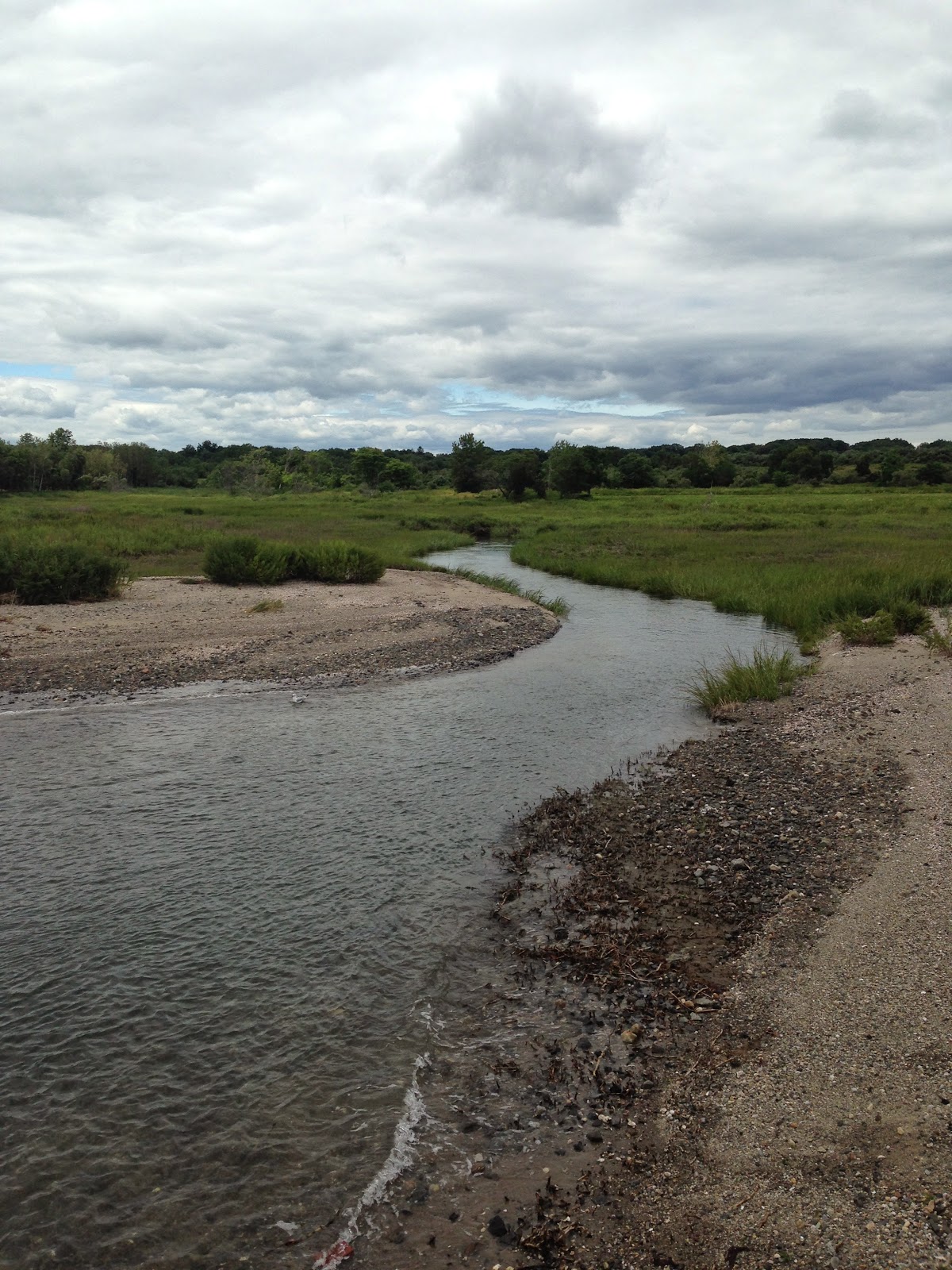 or have a little one who loves to dig in the sand, then this is definitely the place for you. 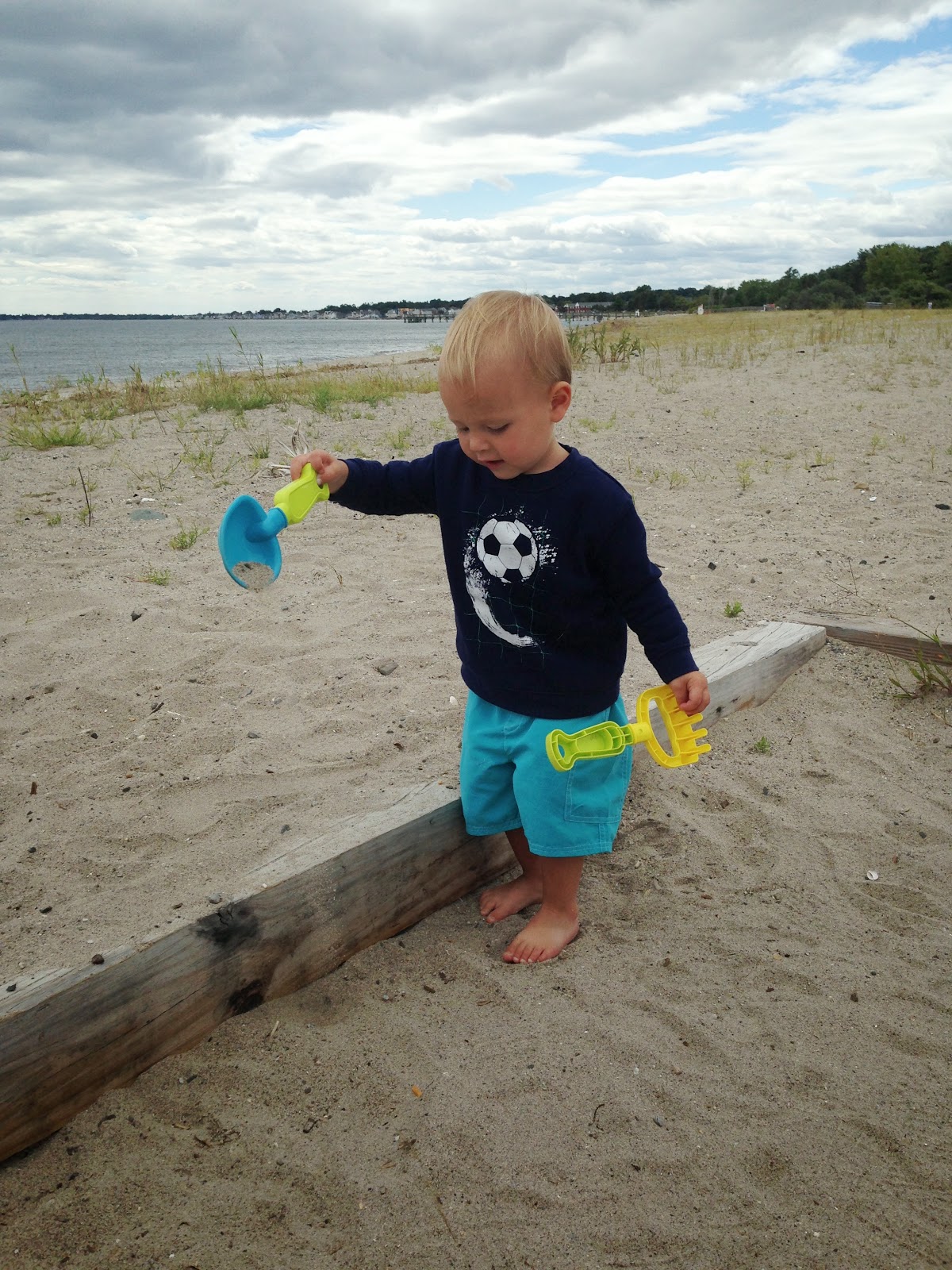 We found a bench and a place where Eli could put his sand toys to good use and just sat and enjoyed the fresh air. The sun even decided to make a much welcomed appearance. 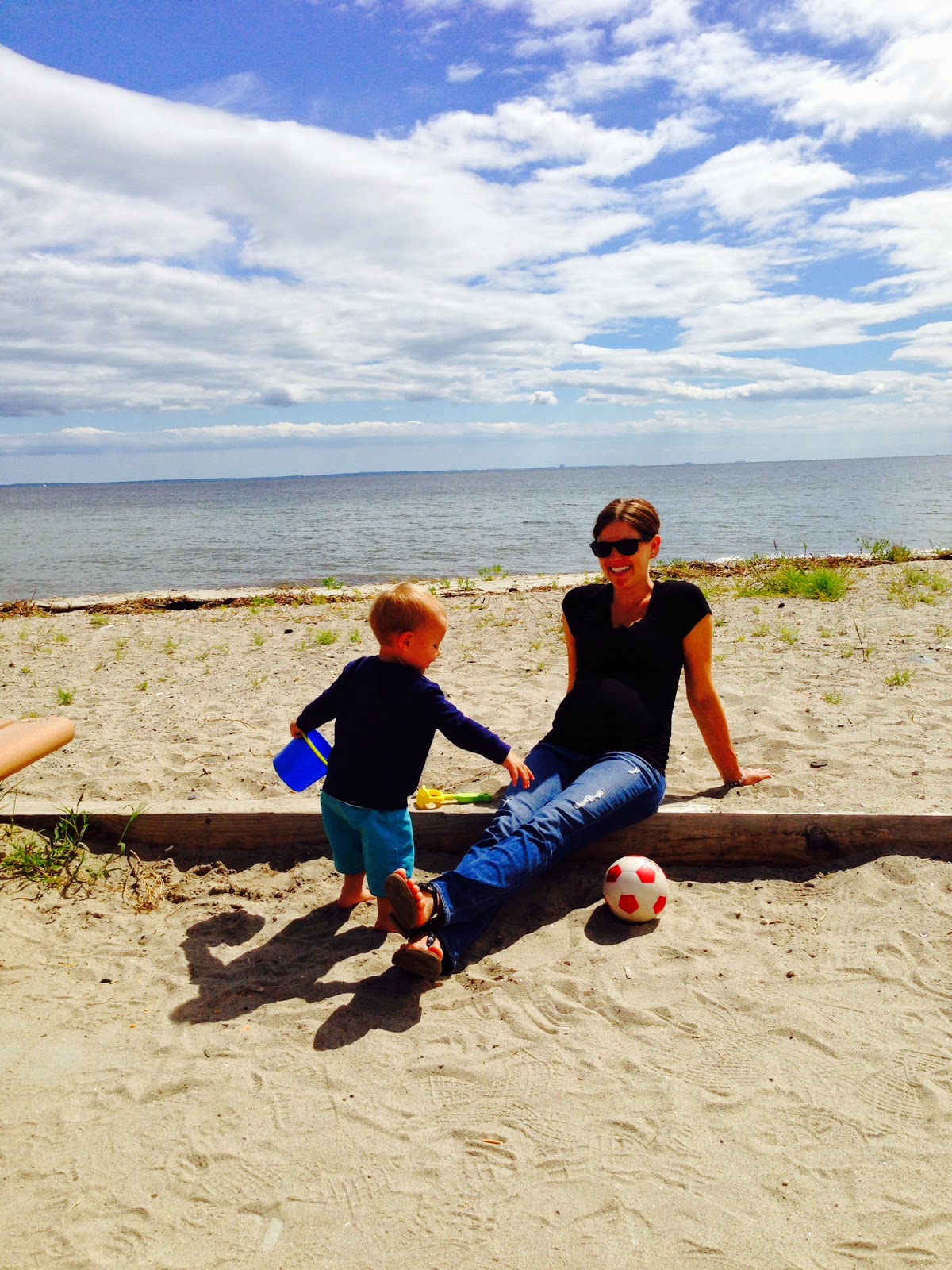 We dragged our little sand crab (he got crabby when we said it was time to leave) away from the beach and took off for New Haven. We took Eli on his first college visit, to Yale University. 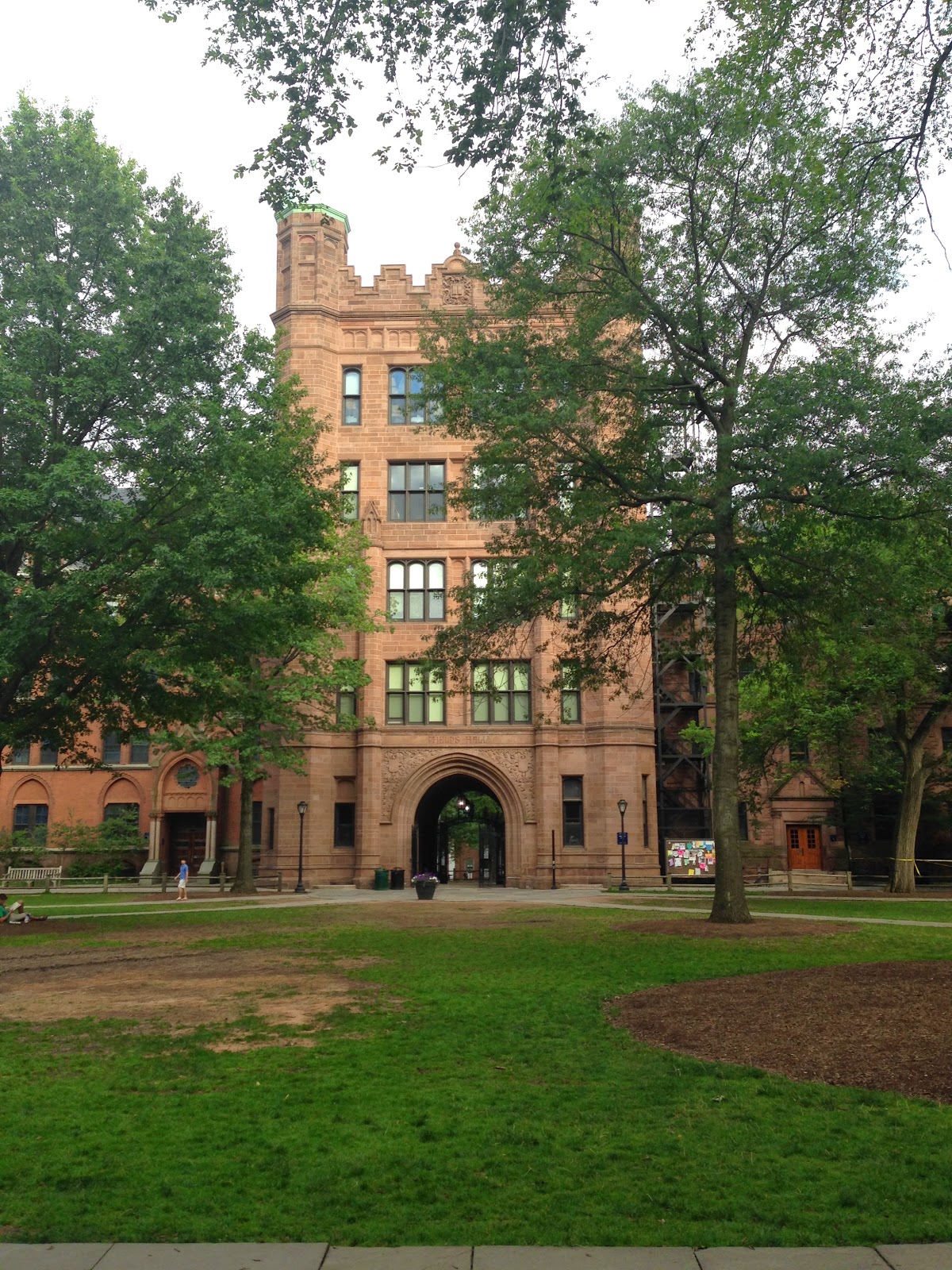 I just love the architecture of these old universities. 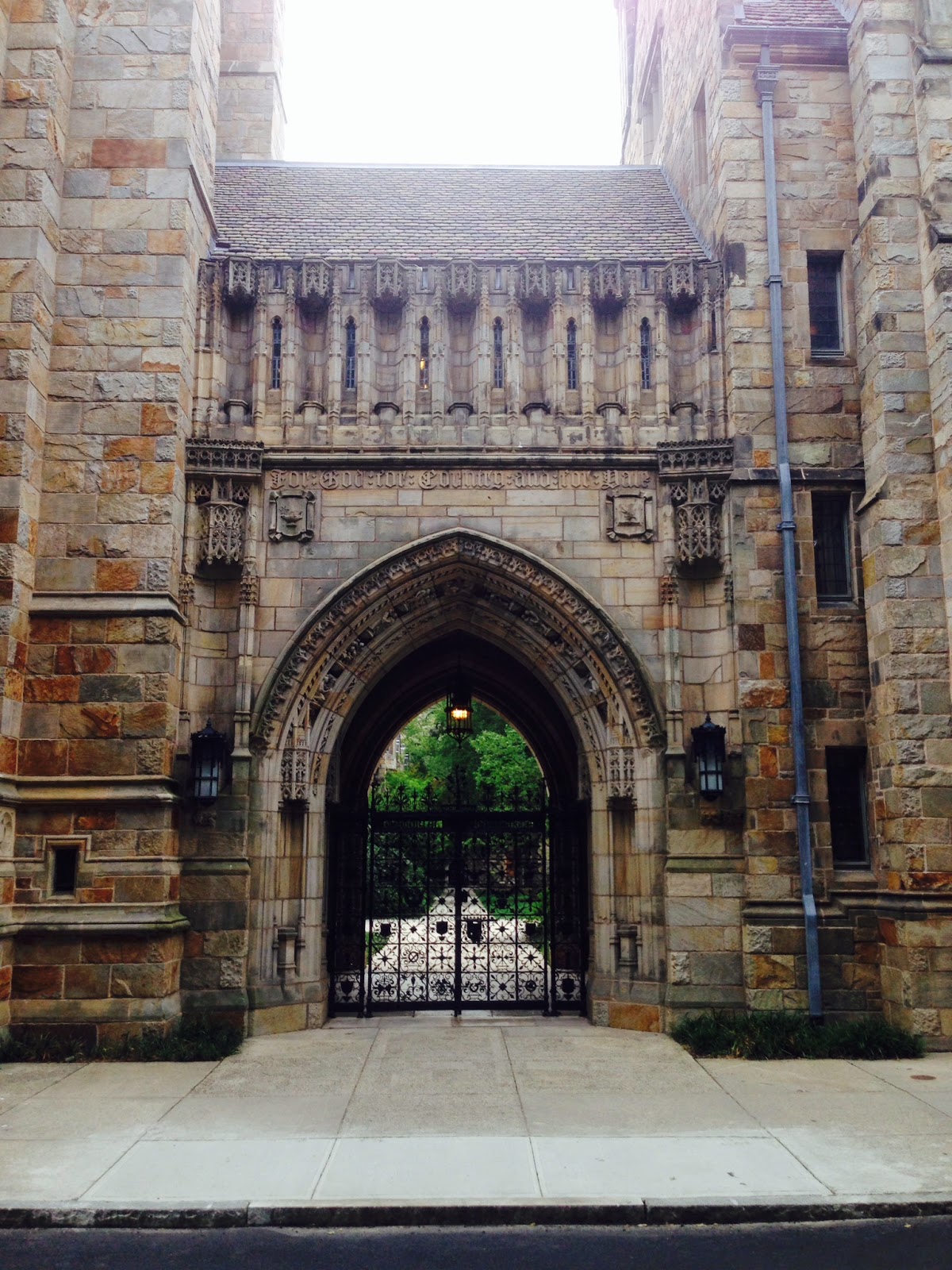 Two years ago, around this time, we went to Princeton University and it too had beautiful old buildings that created the seemingly perfect environment for higher learning. Eli was still a mystery then and now he's out terrorizing us all and we await Baby #2's arrival in just 7 weeks. 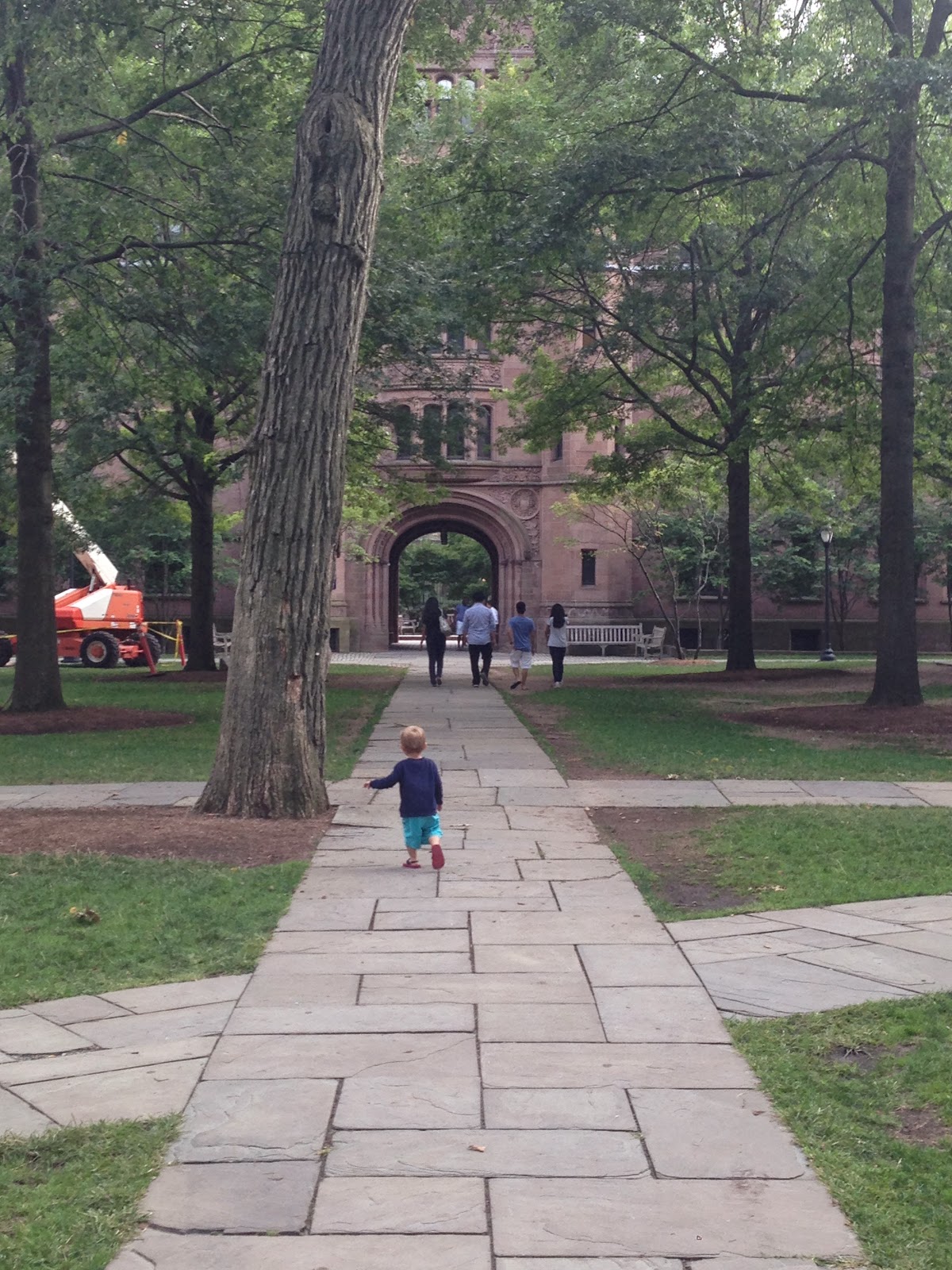 Luis's hope is that Elliot would absorb the knowledge of Yale and one day go there. He said the same thing at Princeton, that maybe the level of education that takes place there would pass through my belly into his brain. I like to joke that that's where the Asian in him comes out. 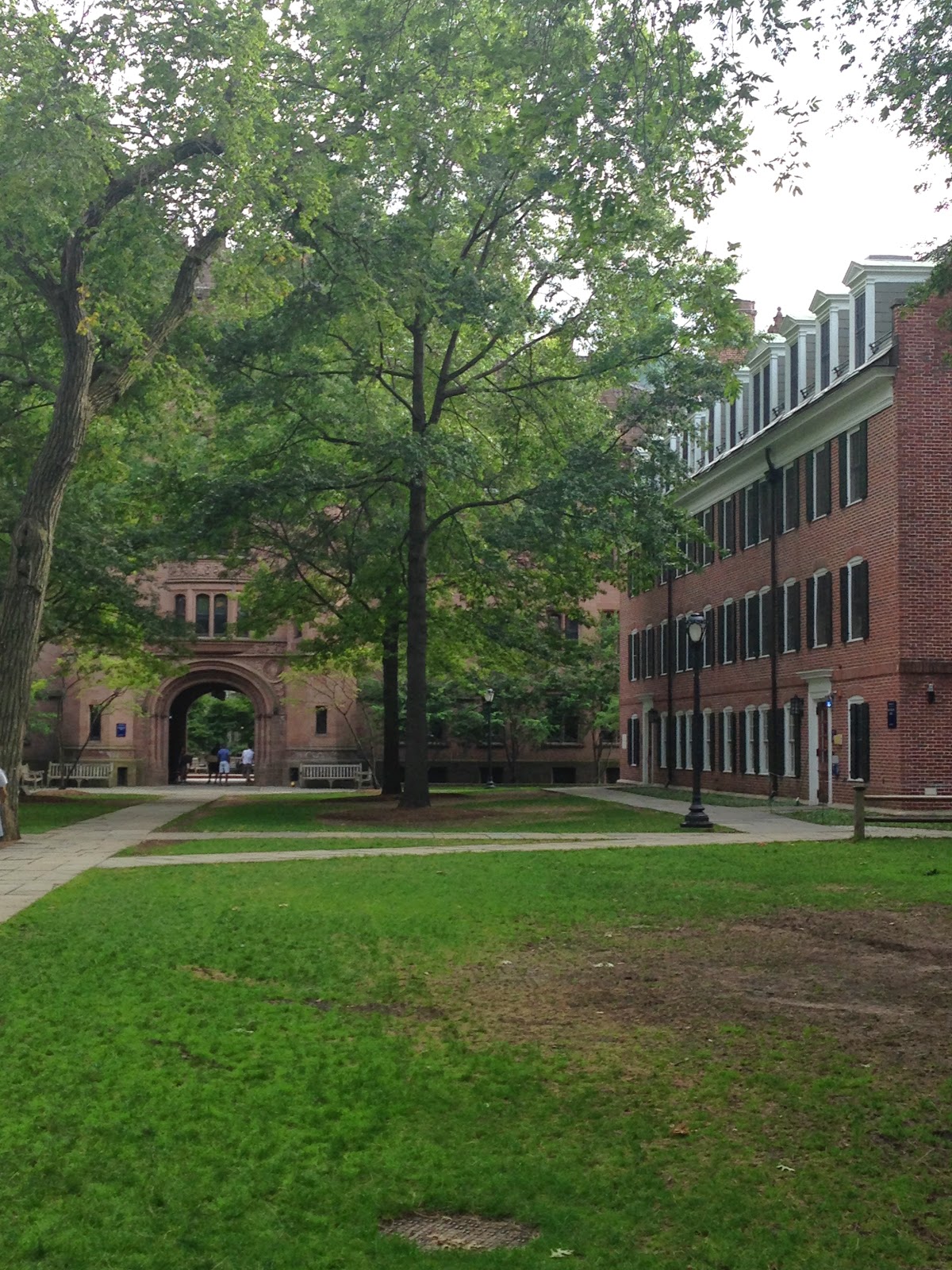 Eli is already prepared for one aspect of Yale in that we call him Eli. Yale students are called "Elis" after Elihu Yale, for whom the college was named so he would fit right in. It was obvious that he felt very comfortable during our time there and really enjoyed his time on campus. 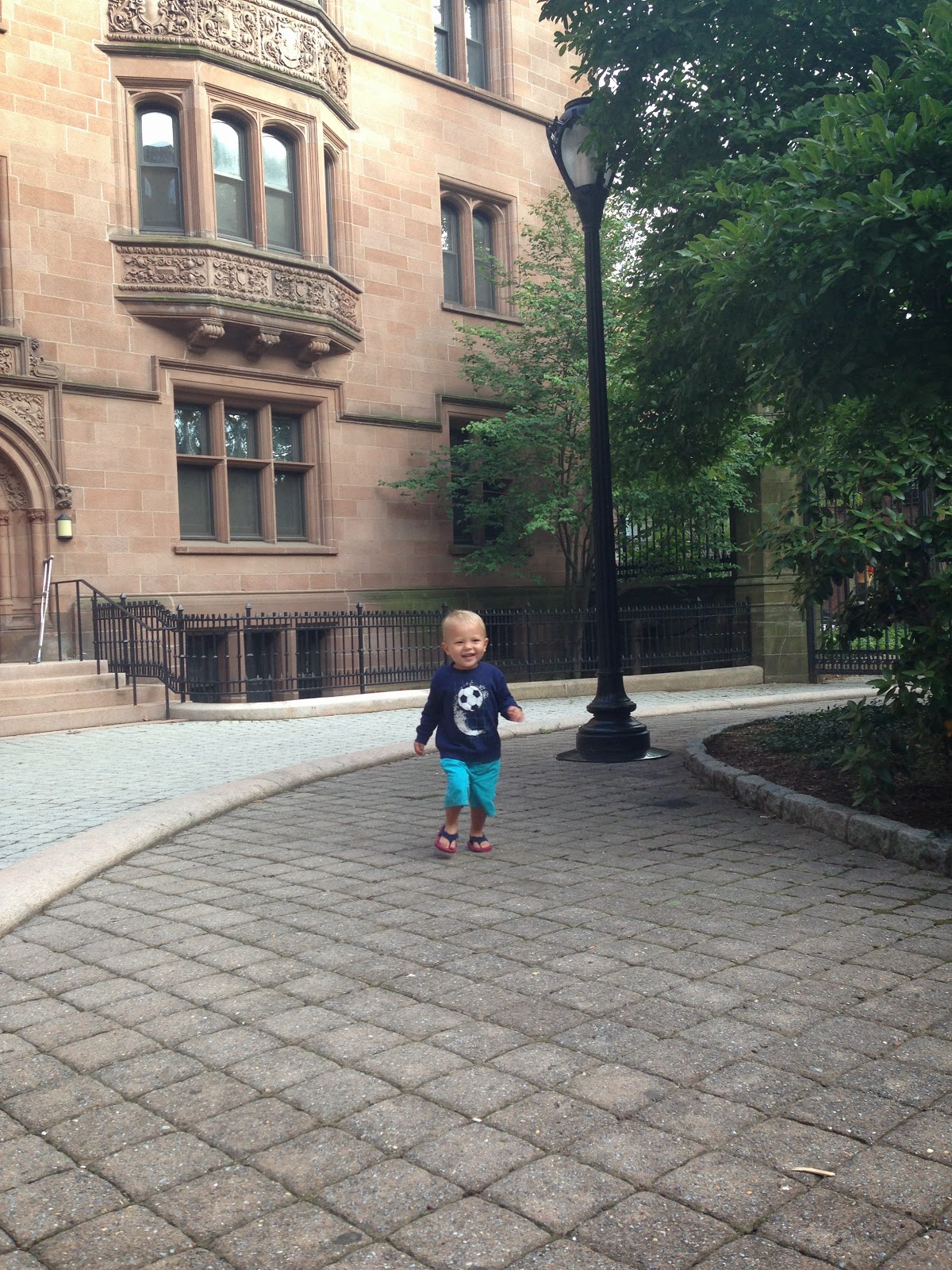 But really, anywhere there is grass and open space where he can run the kid is in heaven so it's no surprise that he loved Yale so much. Being the wise parents that we are, we encouraged him to try running around a few other college campuses before making any decisions. 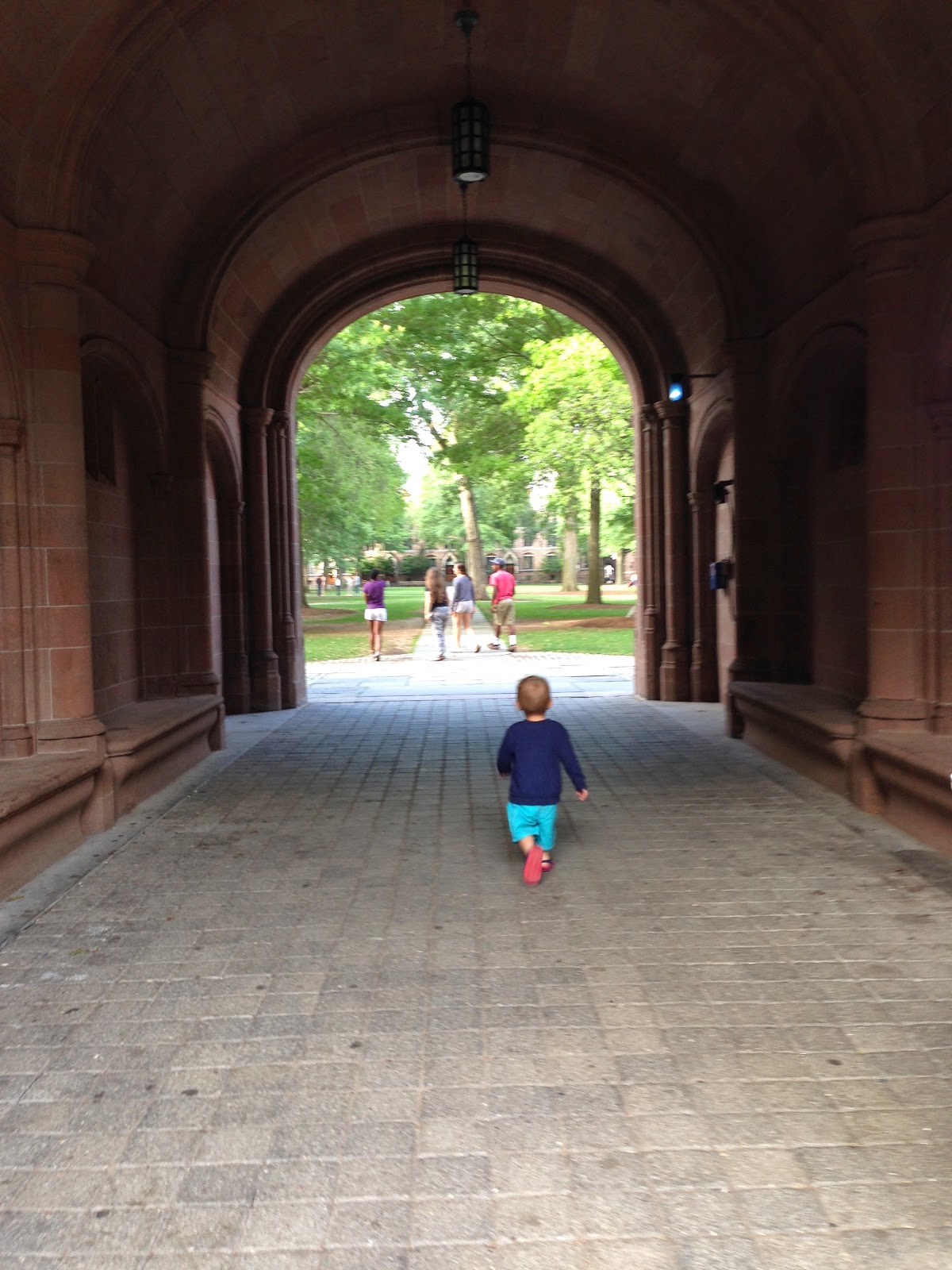 We topped off the day with New Haven pizza at Sally's. 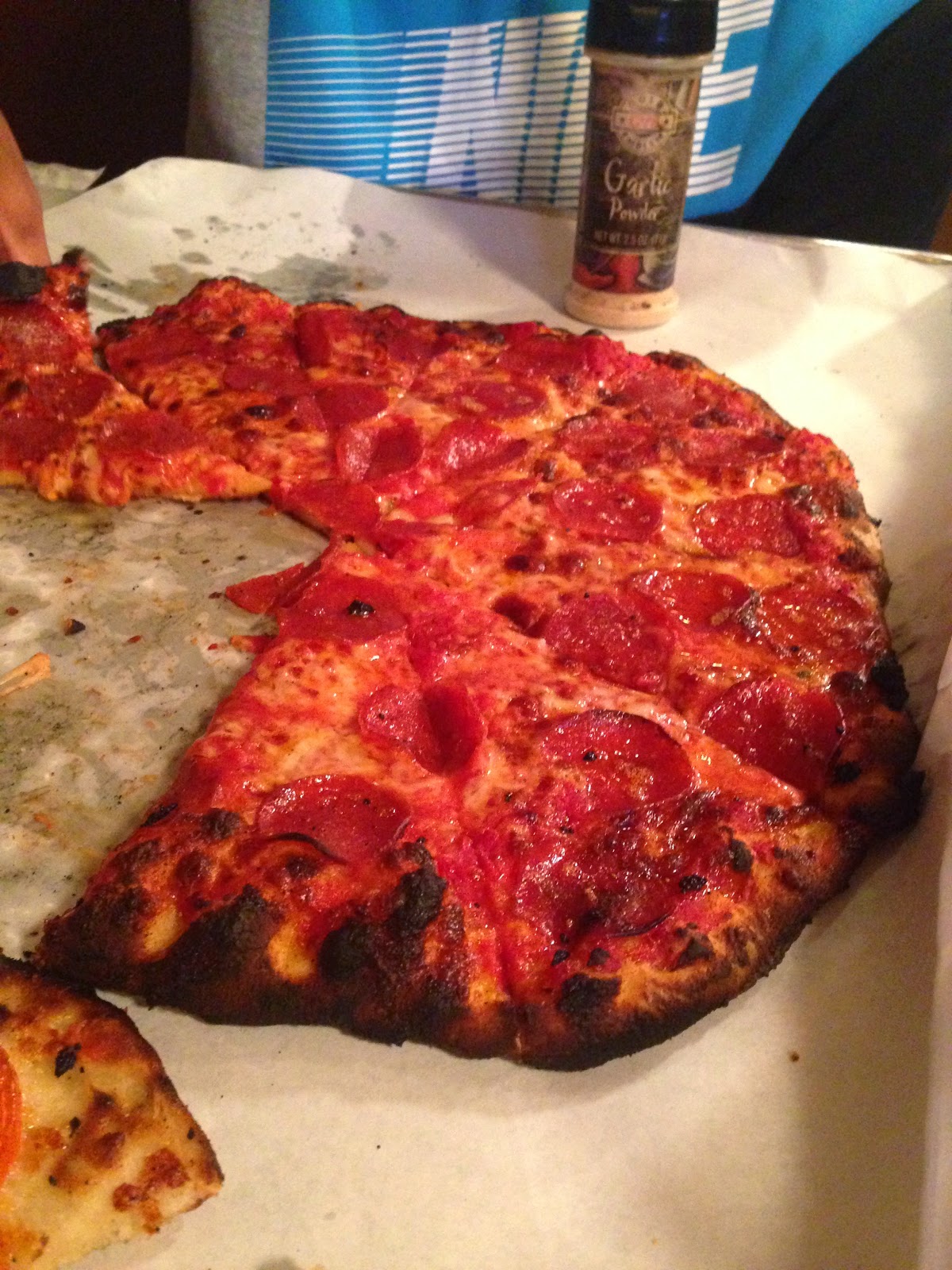 New Haven pizza, also called "Apizza", is known for having a thin, charred and crispy crust, a result of being cooked in a coal-fired/powered brick oven. You may think it looks burnt, but it certainly didn't taste that way. A standard pie comes with sauce and that's it. Vegans, this is totally your kind of pizza! Cheese is considered a topping so if you want it, then be sure to specify.

At Sally's we got mozzarella and pepperoni (seen above) and the White Fresh Tomato, which was just mozzarella, basil and fresh tomato. This ended up being my favorite. The tomatoes were sweet and were complemented perfectly with the mozz and basil. 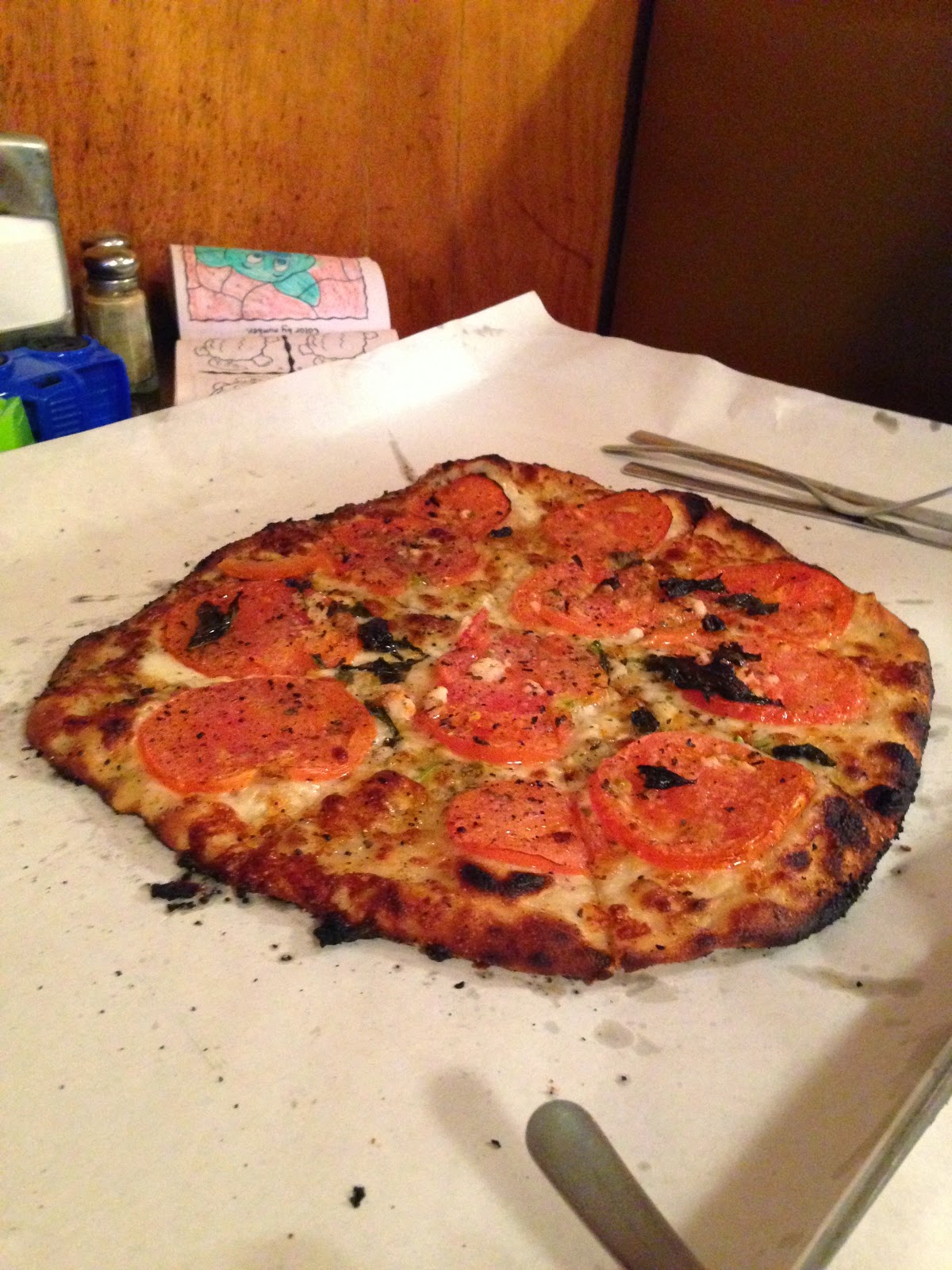 The pizzas were brought out on large baking sheets which took up the whole table. No plates here, just grab your slice and eat. It took all of our self control to not eat these last few pieces. 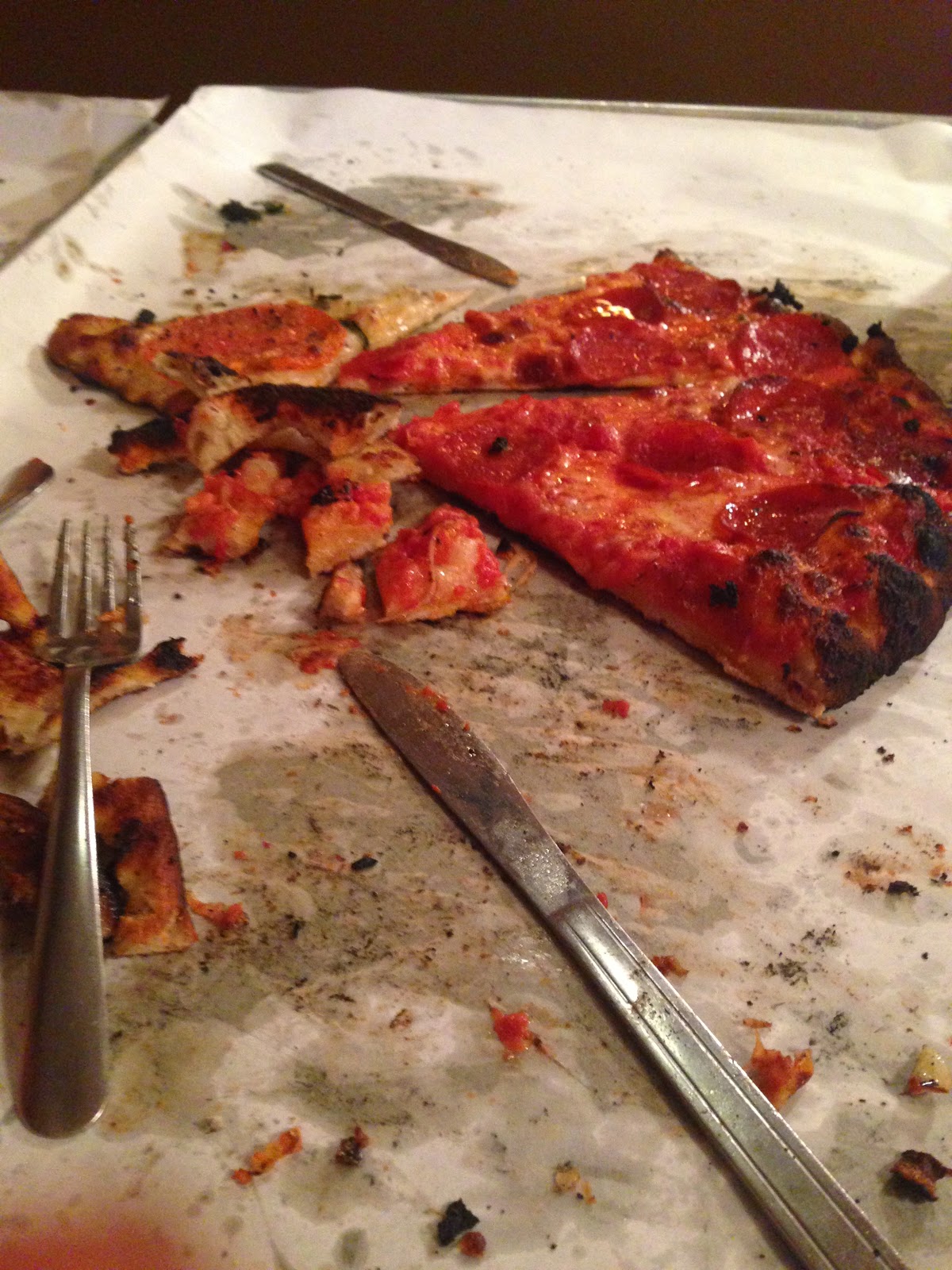 We had the leftovers boxed up to take with us, but if we are being totally honest, they didn't make it through the night.

I should note that there are several options for New Haven style pizza. Everyone has their fave (the people in front and behind us, all locals, each had a different opinion on who had the best "apizza") and the major three restaurants in town all have lines come dinner time. In addition to Sally's, the other two staples are Pepe's, home to the original white clam pizza (I couldn't convince Luis, a pizza purist, that this was worth trying) and Modern Apizza.

Also recommended to us was the bacon garlic mashed potato pizza at Bar. This intrigued us but we decided to go with one of the original spots for our first experience. You can bet though, if we had more days there, we would have had pizza each day and tried them all! 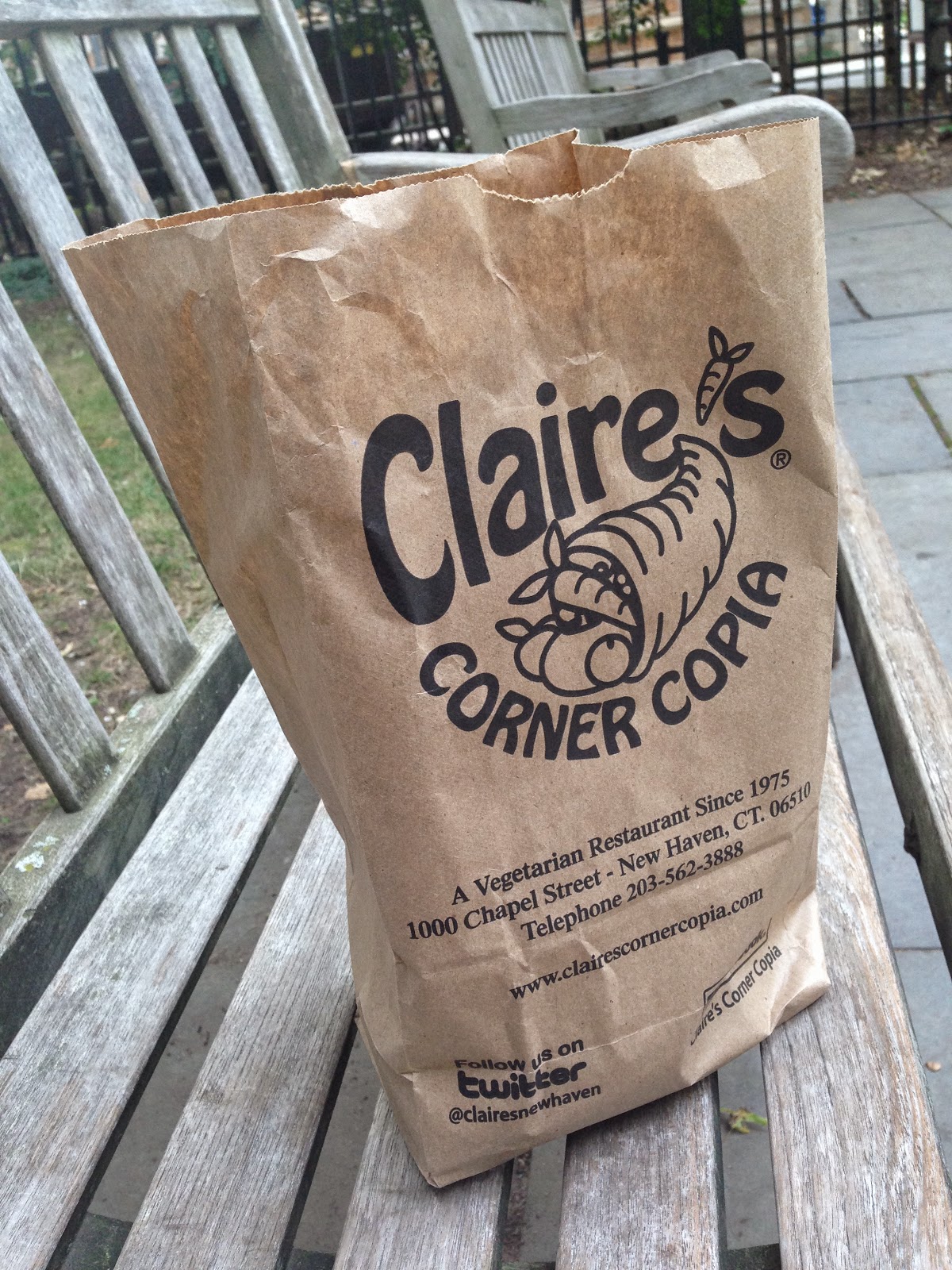 Of course when I got there, I couldn't resist all the other tempting dessert options on display so we ended up with carrot cake, pumpkin loaf (I think the cooler temps put my in a fall mood) and Lithuanian coffee cake. 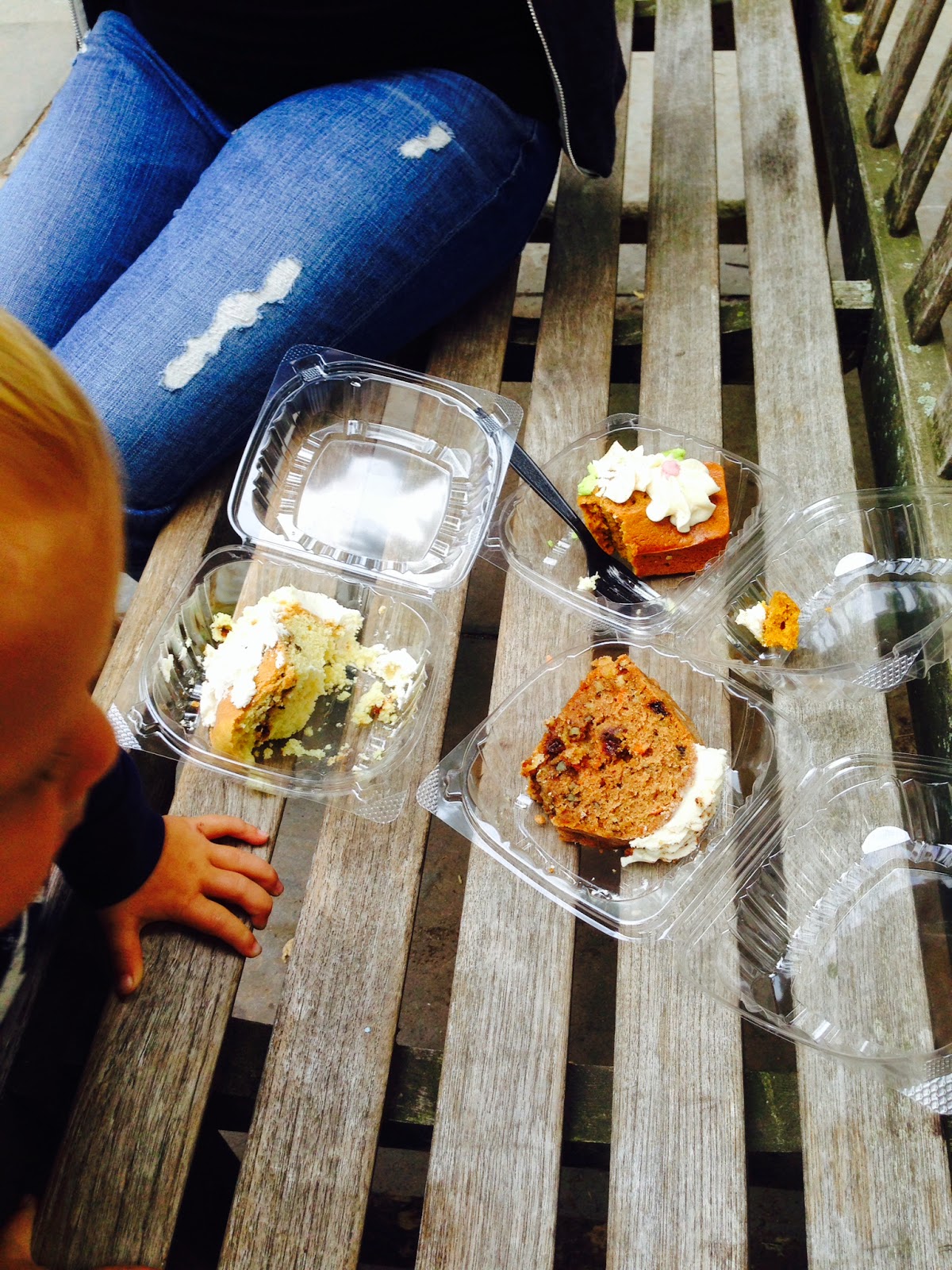 Eli, the dessert lover that he is, could not get enough of the pumpkin loaf. I tried to only give him the cake part without frosting but he wasn't having that. He knew what he wanted and insisted I frost that bite up before offering it to him. The kid cannot be fooled when it comes to dessert.

The carrot cake was dense and nutty which I love and the coffee cake? Well, I can see why it was recommended to us. It was delish. The filling consists of raisins, walnuts, brown sugar and coffee grounds. So it's legitimately COFFEE cake, unlike the typical coffee cake that I can only guess got its name because you drink it with coffee.

I need to figure out how to re-create this. Apparently this chick says her recipe is pretty dang close to the real thing and this one here says it's the actual recipe itself. You can bet our small group will be getting a test of one of these in the weeks to come.

To wrap up what ended up being a ridiculously long post about our little get-away: New Haven, with our stops in Milford, was the perfect overnight trip. There's not a lot going on, but if you just need to get away for a night and want to eat some good local food, then it's definitely worth the trip.

And who knows, maybe we will be back there someday if our little Eli becomes an "Eli"....