We moved a couple of weeks ago. Hence the lack of posting despite my resolution to blog more frequently. Before I continue, I already know what you're thinking so let me just answer your questions: Yes, again. We needed more space for when we have visitors and we found a great deal on a three-bedroom. Eli could only give up his room and sleep in our bathroom for so long in our old place before he would start having life issues from his parents making him sleep in their bathroom.

For those of you who keep our address in an old fashioned address book, I'm sorry. You probably hate all the scratch outs and rewrites you have to make in there because of us. I get it. It's annoying. I hope this will be our last one for awhile. As long as we stay in NJ, I can promise it will be. Now if I could just promise that we will stay in NJ.

This makes move number 347 in our (almost) 5 years of marriage. 5 years?? Can't believe we are almost to that milestone. Actually it's only 7 moves in 5 years, although it feels like 347. And if you include the moves I made since college, well, I've moved at least once a year, sometimes twice, in the last 8 years.

Can I just say, I HATE moving. Specifically the moving out part. Even more specifically, the very end of the moving out part. I don't really mind the moving in that much. I actually kind of enjoy the organizing and figuring out where to put things. Until of course I get to the point where I'm not sure where to put things. I don't really even mind the initial moving out. Packing the main things up isn't so bad. Moving the furniture isn't so bad either, because  let's be honest  my husband takes on the burden of most of the heavy lifting so naturally I don't mind the moving of furniture.

The part where I start to lose my mind is when it starts to look like this.


I stress out when all the little bits of stuff that are left laying around at the end. The stuff that didn't fall into a nice category like "dishes" or fit nicely into a box like books. The stuff that you shove into bags and it feels like you never make any progress.
Things like food in the fridge and freezer and hand soap bottles that are too full to throw away and stuff you still need to keep around because you're still living there. And a new one for us this go around thanks to our son, plug safety covers. Ugh. Those were a pain to pull out! On the bright side, they're definitely child proof. Adult proof as well. My fingers hurt so bad from pulling them out that I had to stop and take a break. And I'm not a woos.

This was our first time moving in the snow too. Not fun people. Not fun. There's a reason the winter months are considered slow in real estate. At least where we are at.

All complaining aside, the excitement of being in a new home has definitely hit me. Slowly things are starting to feel more put together. As soon as we are fully in and settled it's going to feel soooooo good. If we ever get there that is and I don't go crazy before then.

The things that made moving so much harder this go around, was 1. having an active 16 month old who likes to think he is being helpful by pulling out all the clothes I just so carefully folded and packed 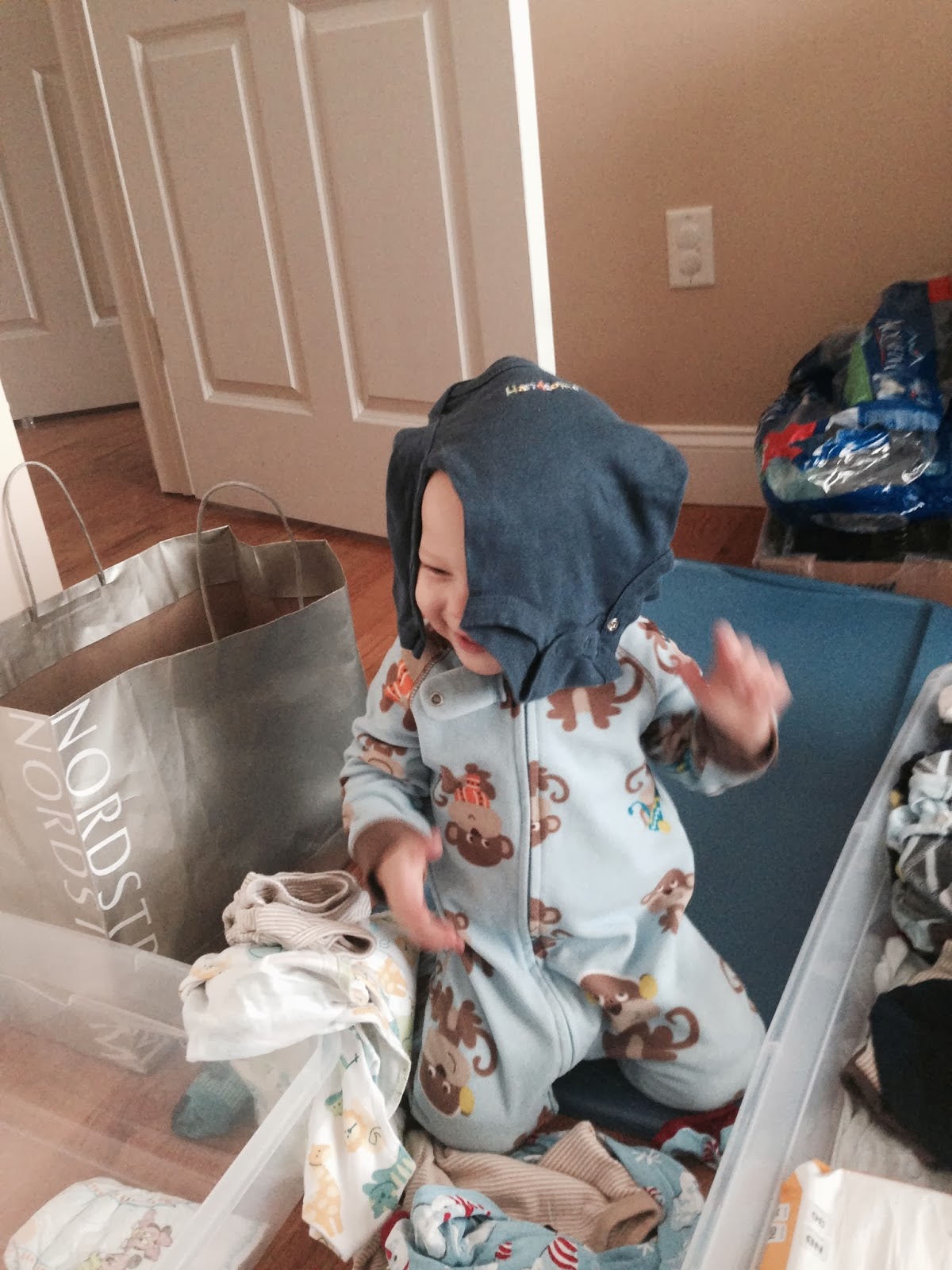 and 2. having my husband be gone for most of the month.

Why did we choose to move when Luis was gone you ask? 1. I told you, we're crazy. and 2. Our lease was up in March and we had one weekend, Valentine's weekend, that he was home that we could get it all done. He did most of the big stuff that weekend but since I was still having to sleep at the old place there was still a lot of little stuff that I ended up having to shuttle over.

It has also been nice not having to worry about disturbing our neighbors below us with every little thing Eli drops on the floor. I can let him run and play and be a loud crazy boy without fear of annoying anyone. 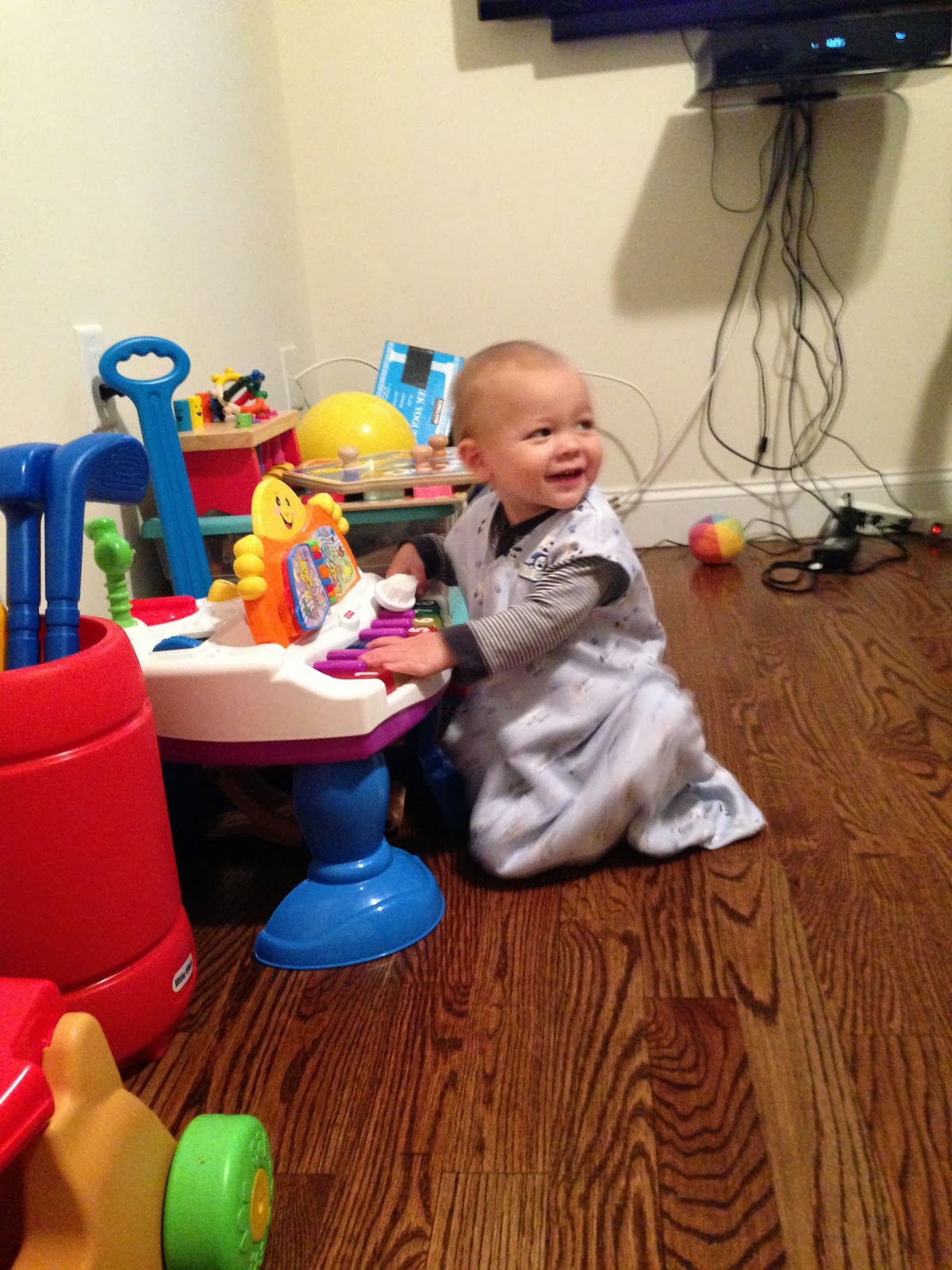 And with that, I'm off to get some banana bread made and hopefully hang some stuff before that loud crazy boy of mine wakes up and hijacks my productivity!
Posted by Cara at 5:57 PM