Saturday we celebrated Elliot's first year of life....and Luis's and my survival of our first year of sleepless nights, poopy diapers and all the many other joys that come with keeping a miniature human being alive.

My parents took advantage of the long weekend (yesterday was Columbus day for all you non-government people who didn't get the day off) and flew in to celebrate the big day with us. 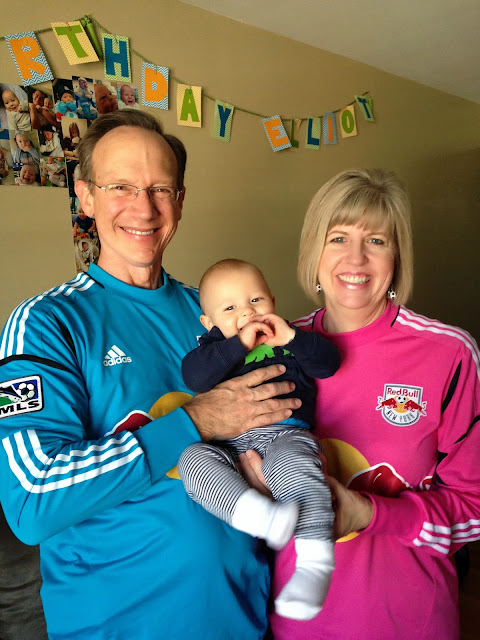 Last year when they came, we celebrated his first week of life with cupcakes at Crumbs bakery. 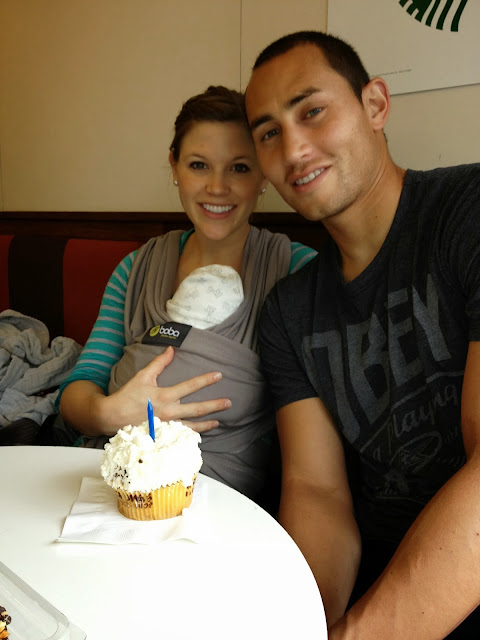 This year we decided to recreate the memories of his one week "birthday" on his first birthday. 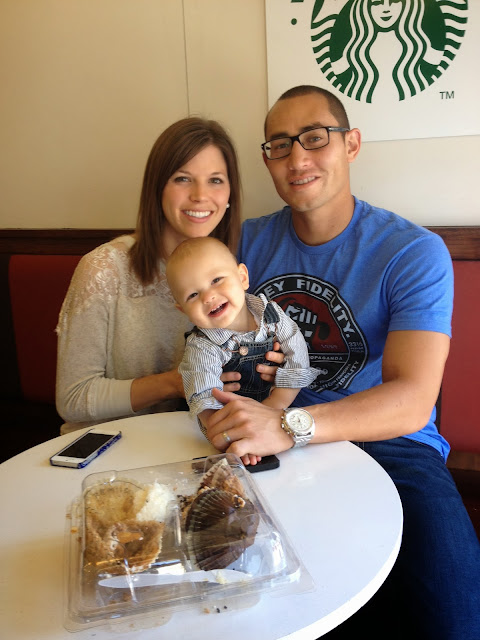 I tried so hard to keep my baby pure of sugars and unhealthy foods in his first year of life in hopes that he would fall head over heels for his fruits and veggies. It was going great until about two months ago when he decided carbs were the way to go. As of Saturday, apparently cake is okay by him too.

He must have gotten tired of waiting for someone to give him a bite. 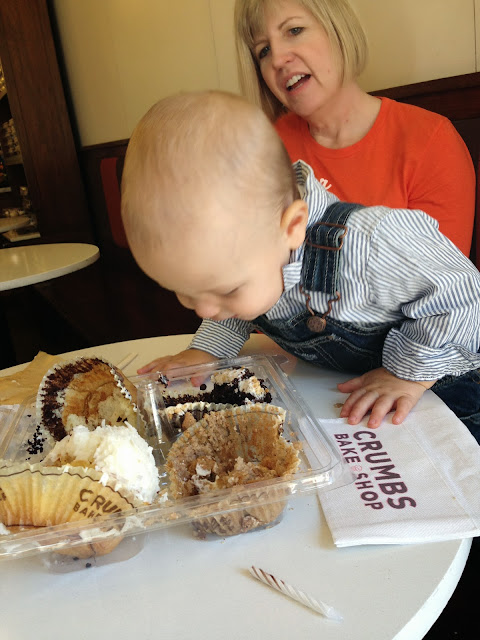 Thankfully, for the sake of his outfit, he never actually stuck his face in it. He'd lean down like he was going to dive right in, then pop right back up with a big smile on his face. I think it was his way of communicating "Hey people, this stuff is goooood, give me some more please!"

Also on his one week "birthday", we snapped a shot of him with a giant slice of pizza from Benny Tudino's in Hoboken. 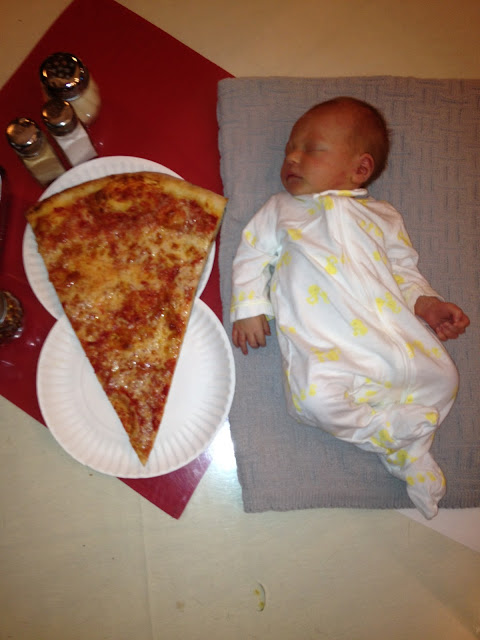 We tried to recreate that picture as well but weren't quite as successful this time. It's a little more difficult these days to get him to lie still than it was a year ago. 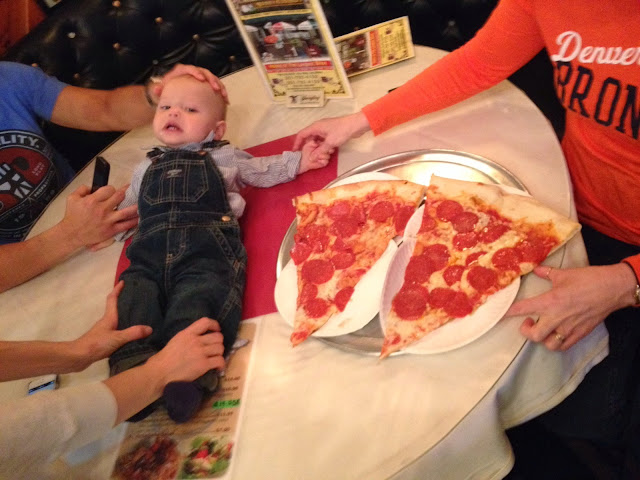 He was more interested in eating the pizza than taking pictures with it. Can't say that I blame him really. 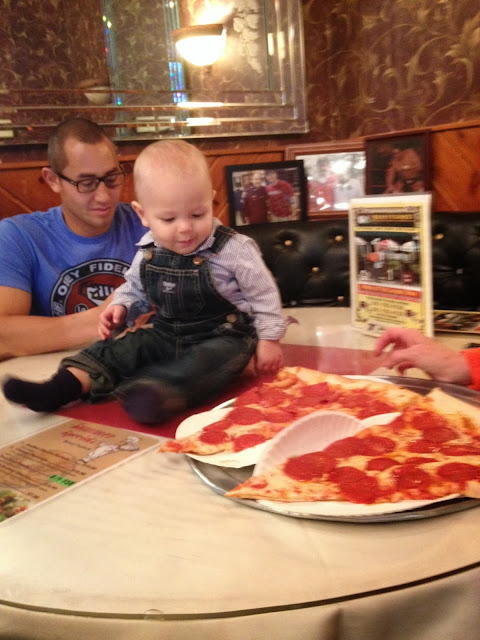 Later that day we had a few people from church over and watched the little guy eat his own cake. Unlike with the cupcakes and the pizza, he wasn't quite so aggressive this time.

He might have been a little freaked out by all of us standing around staring at him with cheesy grins.

His facial expressions kill me. I can't wait to figure out what's going on in that head of his.
His mama's not afraid to dig into a cake so I grabbed a chunk and gave it to him.


He enjoyed it, but he was waaaaaayyyy to civil!

His smash cake became more of a take-a-piece-and-eat-it-politely cake. He wasn't too into getting his hands dirty. He gets that from his daddy. (I can say that because Luis said it first) My guys are allllll "boy" except for when it comes to getting their hands dirty.

Eli ate his chunk and decided he had had his fill.


It wasn't quite what we were expecting him to do, but it meant minimal clean up which was fine by me! It also meant there was plenty of non-destroyed cake for the rest of us to demolish.

While he didn't "perform" for us on the smash cake, he did surprise us all later when he took his first steps! We definitely weren't expecting that.

This color roller made it happen. 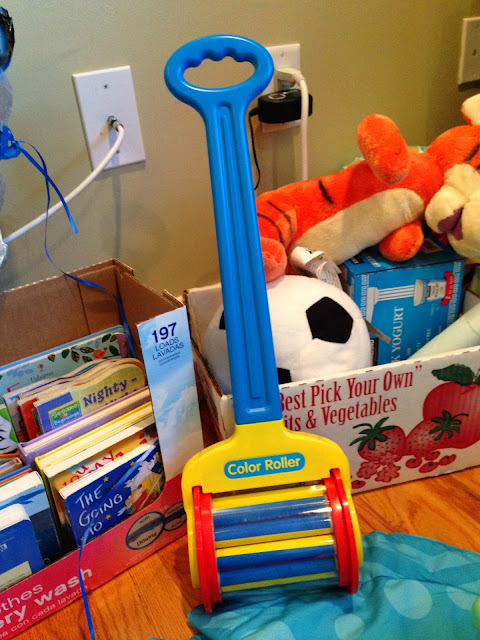 If your kid is on the verge of walking, you should definitely check out the Schylling Color Roller

. Thank you Jenelle for this awesome gift!

And thank you James for capturing so many great pictures like this.


It's been a crazy fast year filled with lots of learning, growing and most of all laughter for all three of us. We are so thankful for and humbled by the journey of parenthood and look forward to all that the next year holds for our little family. Happy first-year-of-life Eli!

Thank you to Laura Miller for the adorable and delicious cake! 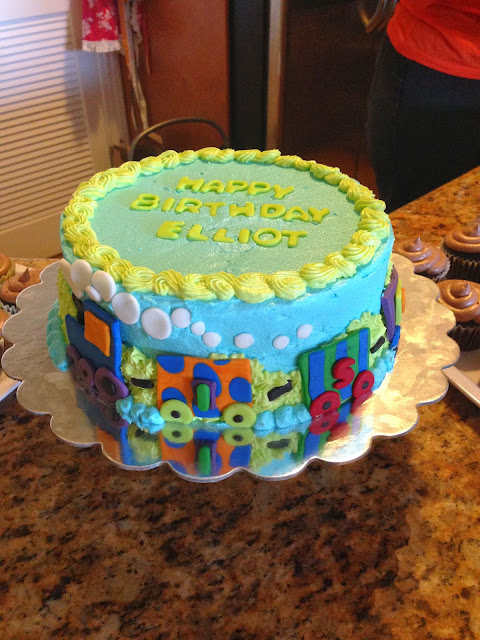 If you're in the New Jersey/New York area and in need of a cake, you should definitely get in touch with her. She's easy to work with and her cakes are great!
Posted by Cara at 3:18 PM

The 'recreating' picture with Eli held down next to the pizza was excellent. I'm going to print it out and laugh often. His expressions at cake eating time are priceless. He totally knows something abnormal is about to happen! Love it, Cara.