If you would have said the word "sandy" to me a week ago I would have thought of being on a nice sandy beach soaking up some sunshine with my hubby in Mexico. 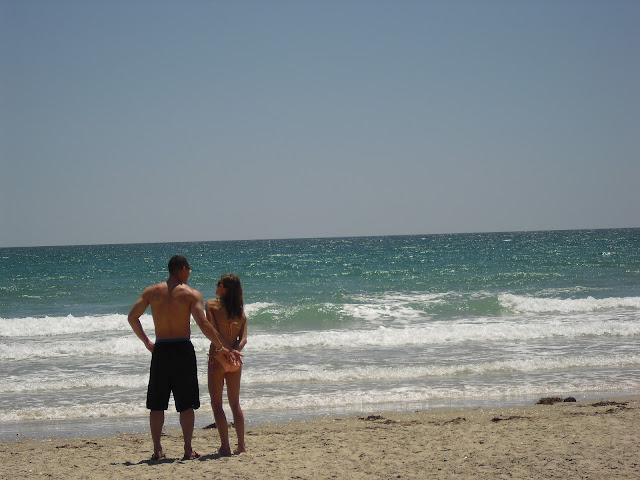 If you were to say the word "sandy" to me right now I would think of this:

We are, for the first time ever in our lives, preparing for a hurricane. Being from Arizona, I never would have imagined living in a place where they actually have real weather. Let alone a place that has dangerous weather.

So far, this storm is seriously interfering with my life. First of all, the storm is responsible for making me miss the first half of Luis' game on Saturday. Even though they covered the storm all morning long on the news, and even though they were saying the same thing over and over, NBC still felt the need to interrupt Luis' game with yet another "breaking news" update telling us to get ready cause Ms. Sandy was coming to town.

Second, because of the storm, my parents had to change their flight and leave a day early. We had so many great things planned for Sunday but Sandy had to go and take that all away from me. Oh Sandy, you're making it really difficult to like you.

Fortunately, the airlines waived all change fees in anticipation of the next couple of days allowing people to get out before they got stranded, including my parents. I shouldn't complain, I know. I'm sorry. I'm glad they were able to get out when they did, safe and sound, back to their 85 degrees and sunshine.

A lot of people have been asking me if we are safe. Gosh I sure hope so! I'm a little freaked out by the whole thing, but our area hasn't been told to evacuate, only to prepare for several days without water and power, so I think we are safe.

This map shows the evacuation zones for New York, but it gives you an idea of where we are at compared to where the storm will hit. We are the big blue dot. 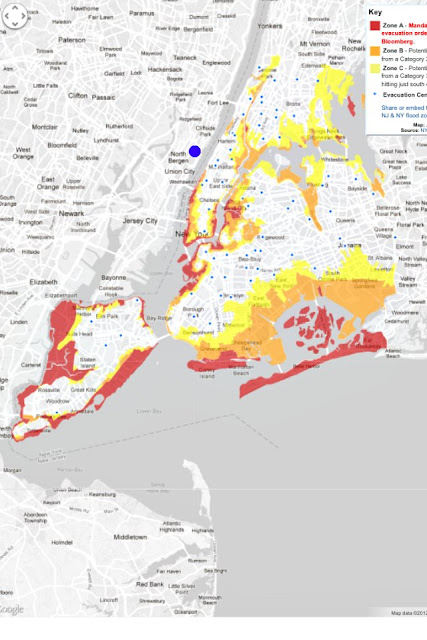 Here is where our apartment sits along the Hudson.

Luis went down this morning to take some pictures before things got too bad.

The river has already started to overflow a bit.

This is the sidewalk we often walk along. It's completely submerged.

He got a couple videos too

The wind is blowing hard, and it's not even close to what it's supposed to be. They are predicting 70-80 mph winds in our area.

We are stocked up on water, PB & J, trail mix, tuna, crackers, apples and applesauce. We have filled every possible container with water and have put extra ice in our freezer. Our computer, phones and iPad are charged up in case we lose power. We are preparing to have a family camp out in the bathroom as it is the only room in the apartment without a window.

This has the potential to be kind of fun as long as nothing bad happens. Unfortunately, we are still in the unknown stage of how crazy this thing is going to be so it's not quite fun yet, but pray it will be soon!
Posted by Cara at 7:40 PM

Praying for continued safety for you all!!

Thank you for the update. We have been praying for you guys and have wondered what it was like.

Did you guys make it through OK? Hope all is well!

We did!! Thank you so much!