When we were living overseas, I sometimes wondered what it would be like to transition back to life in America after living in Germany.

Granted, I expected that we would be living in Germany for 10 years instead of 3 (5 for Luis) so I thought the changes would be more drastic, but still, it's something that has been on my mind as I now have the perspective of life in America as I knew it three years ago, life in Germany and now, life in America after Germany.

One thing that I find interesting is how much I realize my perspective of America was based on my West Coast upbringing! Doesn't that capture getting older right there? Realizing how many times you were oh so wrong in your younger years?

Don't get me wrong, there are some things that are pure red, white and blue across our nation, like the plethora of Starbucks and the convenience of apartments that come with kitchens and closets (for you newbies to the blog, German apartments came completely bare--full on bum nakie--no kitchen, no lights, no closets, you have to buy it all...it's a bit of an inconvenience but makes for fun adventures), but then there are some things that I may have assumed about our culture that really were just our west coast culture.

Or maybe they're even as limited as my Southwest culture. Who knows. But what I do know is that I am loving the following things about being back in America:

Pumpkin was a big deal in Germany, but they keep it savory as opposed to America where we associate it more with sweet (i.e. pumpkin pie). I loved me some hot Kurbissuppe but man I missed my pumpkin spice lattes in the fall.

The list could end right there because those were two major things I missed about America and would have been perfectly content with having those and those alone, but for the sake of entertainment I will go on.

Being able to understand anything and everything that is ever said to me.

Whenever I would come home for a visit it always took me awhile to adjust to the fact that people spoke English here. I would find myself getting excited when I heard people speaking English, as if it was something unusual, or anxious to go somewhere and ask something, preparing what I would need to say in German before I realized that people here speak the same language as me and I didn't need to worry about them not understanding me.

Now, it's not even a second thought and I find that I am so much more relaxed when I have to get information about something. I don't dread signing contracts or going to such simple places like the post office because there's just no fear of being caught in a situation where I don't understand or will have someone frustrated with me for not knowing the way to do things.

I loved the community we were a part of in Germany, but man was church hard sometimes. Instead of going and just soaking up the Word, it was mentally exhausting to hear what's being said, translate it, understand it and still get the next point of the sermon.

Shopping the sales at the grocery store.

Thanks to a valuable life lesson good ol' Dad taught me in high school, I make it a game to see how much I can save on each shopping visit. At the Safeway where I used to shop back home, it always says the percentage of money saved compared to your total bill. Dad always said to try and get the percentage as high as possible.

Well Dad, the stores here don't say the percent of savings. But, as you can see from the pic above, I saved almost $40, which was almost 50% of my overall bill! I think that's my highest one yet.

The grocery store, however, provides a good example of one of my "false ideas" of America compared to Germany. I used to think that everything in Germany was so expensive. But the more I have shopped for groceries here in the States since moving back, the more I realize, food is freakin' expensive here too! Sometimes even more so than Germany.

The difference, however, is that you can get some amazing deals, as shown above, here if you have a club/rewards card, shop the sales, and/or use coupons, whereas in Germany, it was rare to see items on sale.

...and not having to watch the latest episode of our favorite shows on some sketchy website that puts crap on our computer. 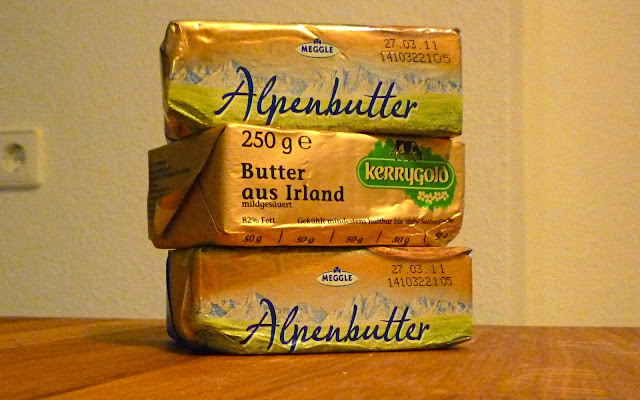 German butter came in blocks of 500 grams. It was pretty easy if a recipe required a stick of butter, because it was pretty much half of the block, or 250 grams, but if it said any other kind of measurement, like two tablespoons, I would just guesstimate and slice where it looked close to what I remembered two tablespoons of butter looking like.

Being able to buy the things I need (or just want) at the grocery store.

Things like brown sugar and chocolate chips and green chilies and pita chips. It's so nice to be able to obtain these things without having to ask special friends with access to such things to buy them for us.

Having the kitchen space to store said things purchased at the grocery store.

Read here and you'll totally get why this is something I am excited about.

Walking across the street when the red hand is up...

...and not being scowled at for doing so. Germans are people who follow rules well. Their country has a lot of great things about it because of that quality. But sometimes the rules override common sense. Like in the case of the red hand and the little walk man.

If that red hand was up, they were not walking. Obviously, this is a good thing when there is traffic. However, the road could be completely clear, no cars to be seen for miles and miles, and they would still not walk. They would stand there, however long it took, no cars coming, until that little "walk man" popped up and then they would go.

We, being the ever impatient, always-on-the-go Americans that we are, would just go. And we were always a little scared to do so for fear of being reprimanded.

Being (generally) on the same time schedule as my fam. 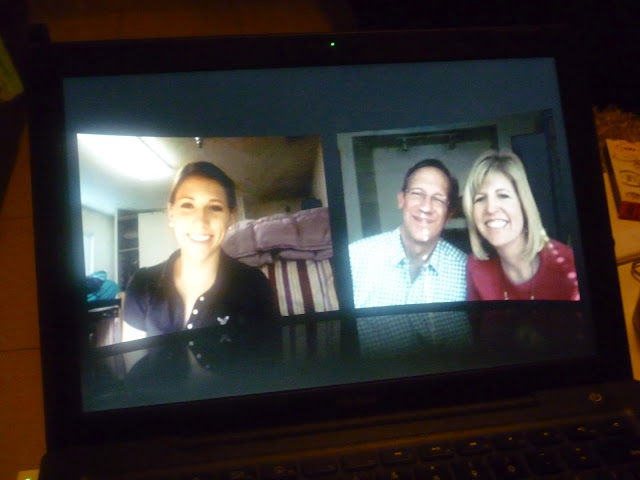 There's still 3 hours between us, but it's sooo much better (and easier to find times to talk) than the 9 hour difference when we lived in Germany.

In both the people and the restaurant choices.

I thought I grew up in a diverse community, but being in the New York/New Jersey area takes it to a whole new level. Riding the subway is one of my favorite activities because NO ONE looks the same. Whether it's their ethnicity or the way they dress, the mix and variety of people is so fascinating.

And don't even get me started on the food...it's unreal all the creative choices one has in such a small radius. We could eat every minute of the day for the next 5 years in New York and still not hit all the amazing and different places that exist in this city.

But believe you me, we sure are going to try and hit as many as our budget (and waistlines) allow that's for sure.

And last but not least, as these are in no particular order, and this list is by no means comprehensive, but in the words of my husband:

There really is no better feeling than the feeling of being in your own country, being a part of your own culture, amongst people who (for the most part) hold the same ideals as you.

We love, love, love Germany and we love that we had a chance to live there; it really was hard to leave. But at the same time there is such comfort in being home, in the life we know and understand, in feeling like you belong rather than being on the outside.

And with that, I'm off to enjoy the comforts of my kitchen to whip up something for lunch. Quesadillas anyone? (Yeah, add those to the list too, I missed me some good tortillas!)
Posted by Cara at 8:23 PM

Haha - these are such awesome comments, and I have to say that I agree with you 100% on all of that. I miss pumpkin spice lattes (but can make my own at least!)

I'm in a bit of a different situation, as my husband is German and for him, this IS home. So we won't ever both have that feeling of life being easy or normal at the same time. And that's okay too. But I definitely know what you mean! Sometimes even the simplest things over here I am more hesitant to do just because of the language thing. It's always nice not to have to think about it when I visit the USA.