Our time in Germany will always be something we will look back on with great appreciation.


We will forever treasure the memories, carry with us the life lessons, cherish the friendships we made and value the perspective we gained from learning the life and ways of another culture.


Our last few weeks there were filled with a ton of packing and far too few goodbyes,
Unfortunately there were many people we did not get to see one last time in the short two weeks we had.


The group of English speaking girls that I met with weekly threw me a surprise baby shower. 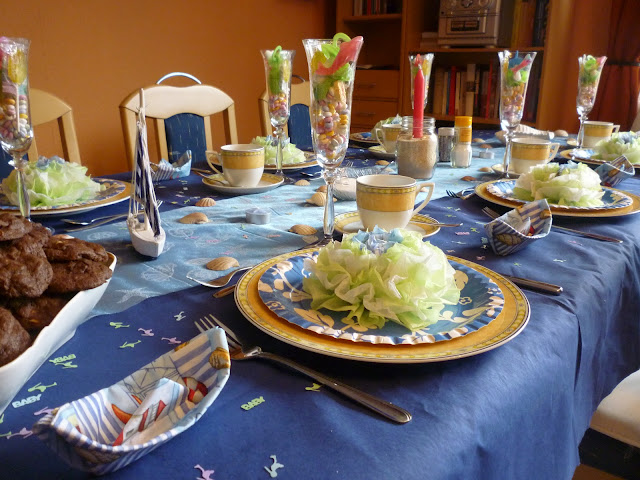 It was a sweet sendoff that confirmed even more how much I will miss our weekly English gab sessions over coffee.


This blog began as a compilation of our adventures learning the ins and out of the German culture. So it is only fitting that I share with you one last adventure that had us sneaking around, fearful of getting caught by an overly-concerned German on our last day in the country.


If you have ever moved, you know that there comes a point after all the packing and cleaning that you are left with, well, lets just say it, CRAP that you have no freakin' idea what to do with.


We sold a lot of stuff, gave away even more stuff, took some more stuff to a place called Kashka, which we understood to be a sort of Salvation Army/Goodwill but quickly realized that maybe it's not quite the same as a worker came out yelling at us for dropping off our stuff prior to their opening hours.


Dude was not gonna let us forget that the place didn't open till 10 a.m. We explained that we weren't able to come later, we were only in town till 9 and so we thought we could just drop our stuff off. He reiterated that they absolutely do not open till 10, it's all over every advertisement they've ever made, which of course we had not seen or heard because we had only just learned about Kashka from a German who said we could take stuff we didn't want/need anymore there.


We asked what we should do with our stuff, if there was anywhere else to take it and he proceeded to emphatically say "I don't know but we don't open till 10!"


Yes, dude, we get that, but what do we do with this problem of getting rid of our stuff???


We never could get an answer from him, other than that they don't open till 10. To his credit though, once he realized that we understood that they most certainly do not, under any circumstances open until 10, he let us leave our stuff there.


I think he was just tired of dealing with us and could tell that we were foreigners and exhausted and so he let us go.


Unfortunately, we had not finished unloading everything in our car. So, we (nervously...we were always fearful of doing something wrong and always felt that at any moment someone might come yell at us for breaking some rule that we should have known about) set out on the street for people to take.


Within 5 minutes a sweet old couple was rifling through our box for buried treasures.


And so, the trash remained. Unfortunately, for us, our neighbor had also moved that week, just a few days prior to us, and the two trash cans we had for our house were full. We set our bags of trash next to the trash cans and were quickly informed that was unacceptable.


Hmmm. Okay, so where are we supposed to take it? Not one person could tell me where I could just take trash. Not. A. One. We kept our eyes out for a dumpster...behind a restaurant or anywhere...over the course of a few days and struck out big time.


Dumpsters just do not exist in Germany it seems.


We continued to ask people where we could throw away plain ol' trash and no one had any idea.


Now, I have really appreciated the efficiency of the German trash system. They have the best recycling system I have ever seen! But sometimes there are things that just don't belong in any of the recycling categories and you just gotta throw them away.


And if the house trash can is full, where in the world do you take it in Germany???


Luis and I were driving around our last night in Germany with trash in our trunk, figuring out what we were going to do. We were getting desperate because our options were either to A. Pay our neighbor, who has a cleaning service, 80 Euro (?!?!) to haul away our 4 bags of trash because (we finally we were able to get an answer of where to take it!) apparently that is the fee for exceeding your house trash and requiring extra trash usage or B. Dump it somewhere, anywhere.


And that's when we spotted the water in the desert... 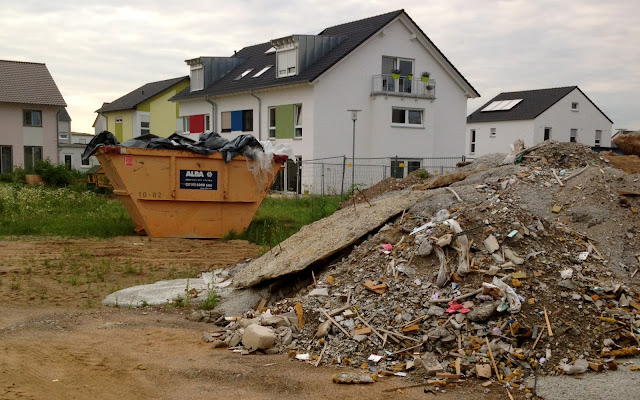 a dumpster! Just a few streets over from us, temporarily in place for use at a construction site.


We have never No one in the world has ever, been so excited to see a dumpster. Or to throw away trash. Seriously, we were like giddy little kids driving up to toss the last bit of stuff that we had. 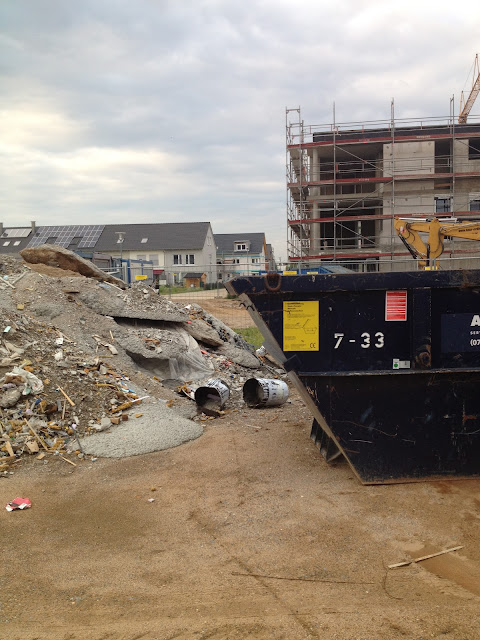 And then we spotted a lady, eyeing us suspiciously, walking slowly toward us, which made us really nervous (Kashka dude got us all paranoid) so we hurriedly got in our car and drove off with one measly little bag which we decided we could toss in the trash at the stadium.


And lo and behold, as we drove up, what did we see? 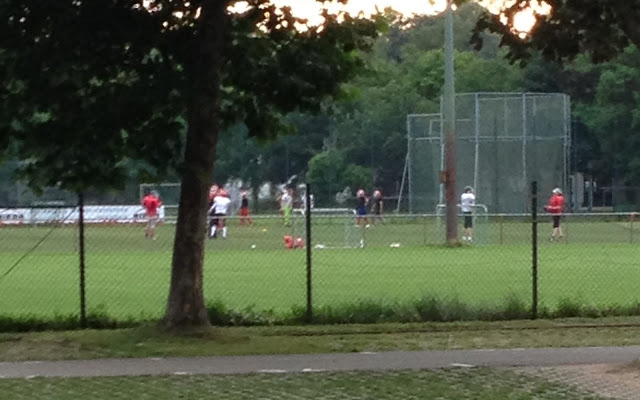 Football players, as in, dudes in full on pads and helmets tossing around the ol' pigskin.


And that concluded our final night in Germany. One last adventure, and a little bit of America on foreign soil.


It's been fun Germany, it's been fun. We will certainly miss your bakeries and all the other many wonderful things about your country and your people. We look forward to the day (hopefully not too long from now) when we can visit again.


Until then, we are working on re-acclimating ourselves to the American ways such as shopping the sales at the grocery store and having the luxury of Starbucks on every corner....or in the case of our small town, in every grocery store. :)
Posted by Cara at 5:54 AM

Heather and I have been having major Germany withdraws. Now after reading this post I miss it even more. I need to finish up with my nursing school so we can go back there! SO many memories, good times and friends left there in Germany.... Sigh now I am getting that familiar sensation in my chest when I miss something so much. THANKS CARA!!!!!!!!! Well we hope to be able to see you guys some time since we are both back in the same country. Happy Travels.

I laughed reading this as I grew up in Germany and remember all too well how strict Germans can be. They really are so obedient! Only in Germany would you see someone waiting for the "walk" signal to change at midnight with no cars in sight in the whole town haha. Ah how I miss Germany so much.