We are in the final weeks before my sister's wedding and it got me thinking...I never posted about her bridal shower like I said I would!


Can I just say, she has some major advantages in life being six and a half years younger than me?


I won't go into the list of things that I like to remind her of from time to time, like how she's taller because Mom and Dad were much more established when she was born and therefore were able to provide better nutrition, whereas I came along when Dad was early in his career and Mom was still in school and they had to survive on rice and beans to make the budget.


Height aside and all, the major advantage I initially set out to point out is that she has is Pinterest for her wedding!


Oh to have had Pinterest when I was planning my wedding...


Fortunately, I can take full advantage of Pinterest in the things I get to plan for her now, like her bridal shower. 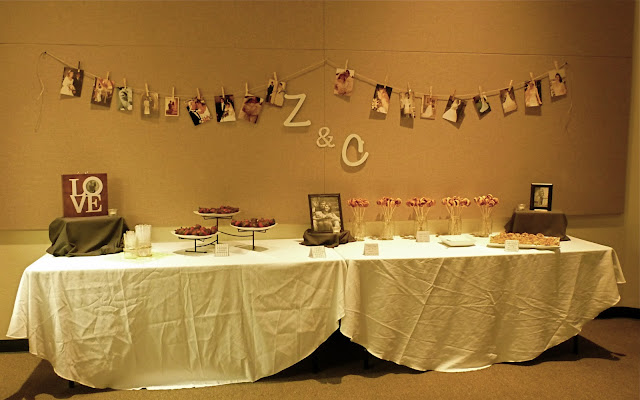 As part of the decoration, we had the ladies attending send in pictures of their wedding day, which we then antiqued and hung on twine with clothes pins. Super easy. Super cute. 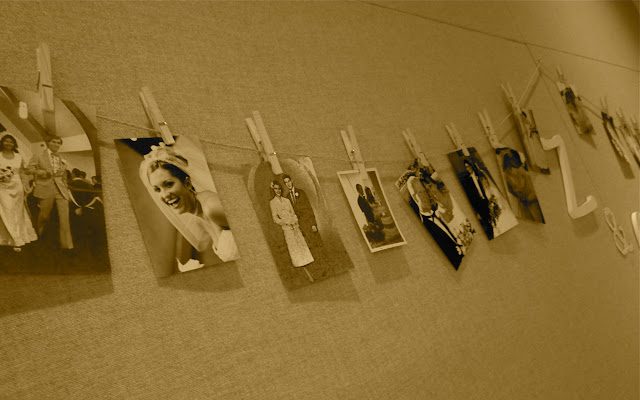 Somehow I thought I got the idea from Pinterest, but I can't seem to find it anywhere so perhaps I thought of it on my own! haha I don't know, but I loved seeing everyone's pictures and highly recommend this method of decorating. 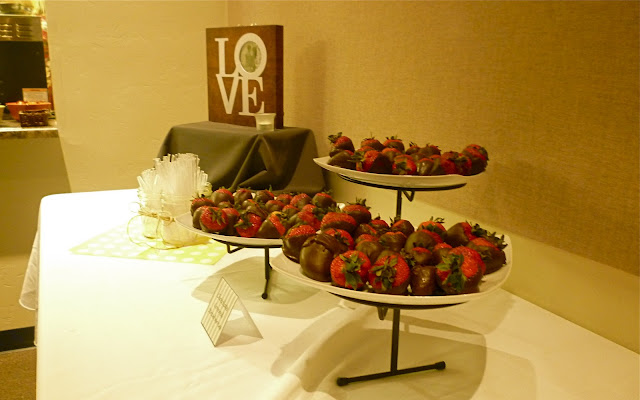 cinnamon roll pops inspired by a Pinterest find although I ended up using the recipe from Iowa Girl Eats, brie pops inspired by the lovely Ms. Joy the Baker and mini quiches, which we made in preformed Phyllo cups found in the freezer section near the puff pastry. 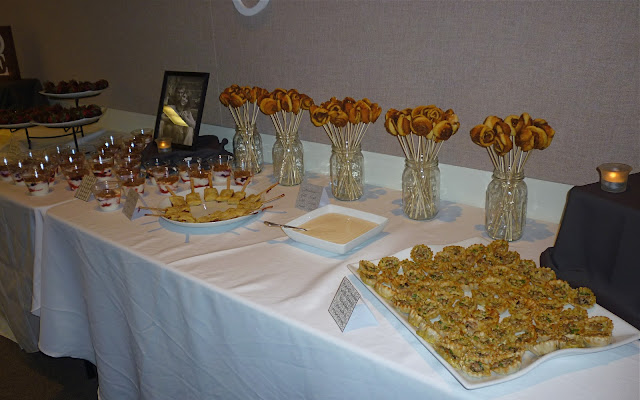 Oh and we had yogurt parfaits with homemade granola, also from Joy. In case you haven't figured it out, we went with a brunch shower, which of course is the best meal of the day if you ask me. 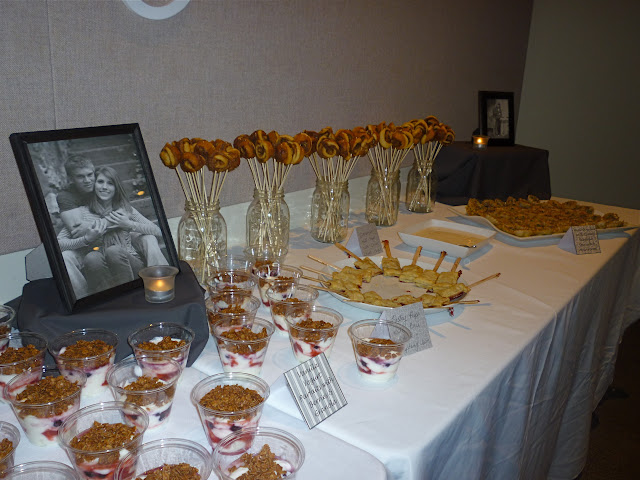 For the centerpieces we took three mason jars, wrapped them around in twine and popped a few fresh flowers in them. 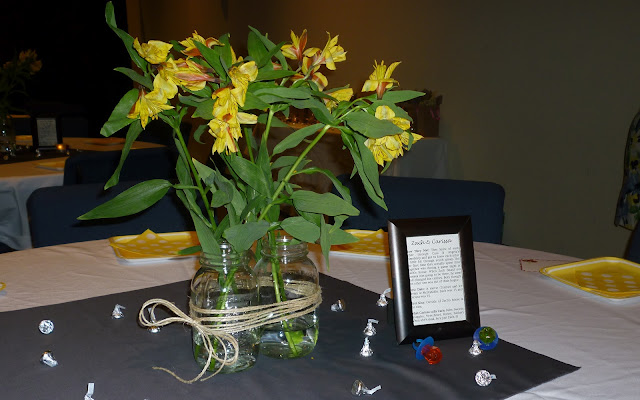 We also had little frames filled with fun little facts about the bride and groom. 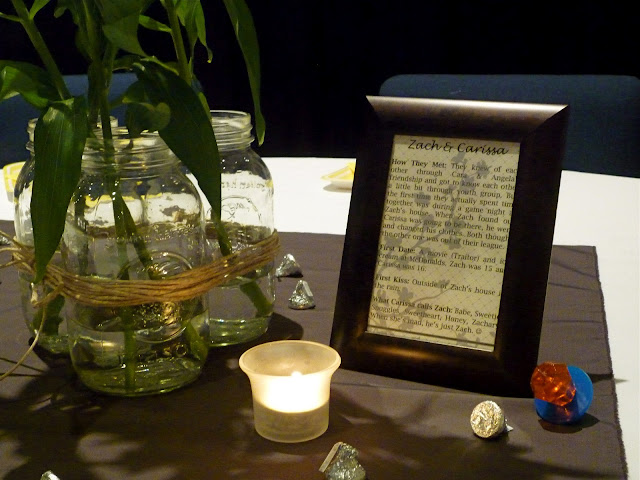 One thing we did that helped pass the time during the gift opening portion was to set a timer and whoever's gift was being opened when the timer went off got a prize. We did this a few times throughout, with a total of 7 or 8 gifts being handed out while Riss opened all her goodies.


We did the Question Game, where someone asks the groom a list of questions ahead of time and then the bride has to answer them the same way he did, and then we did something a little bit different: a wedding cake game. 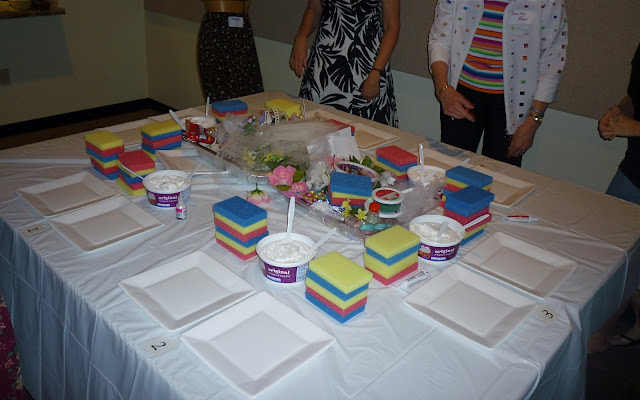 If any of you know my sister, you know the girl can bake. My friend Angela, who will actually soon be Carissa's sister-in-law, and I were trying to think of a game that reflected something about Riss, something she loved, like baking cakes.


One thing led to another and suddenly our crazy thought evolved into a really fun idea for guests to design Carissa's wedding cake. 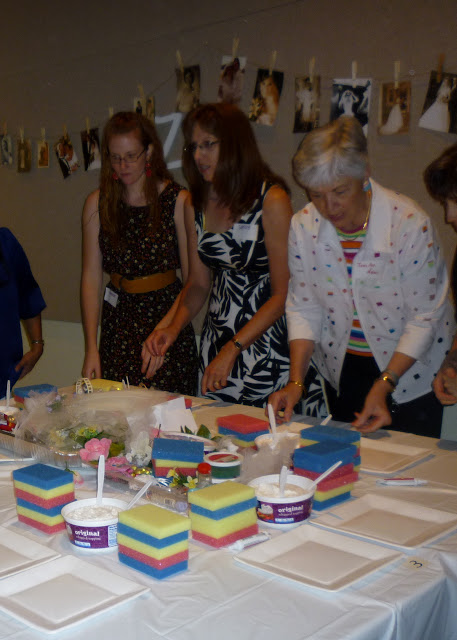 Each table was a team. Each round, the table would send up two people to work on various stages of the cake. We gave them a minute or so for the first round to set up sponges as the base of their "cake". 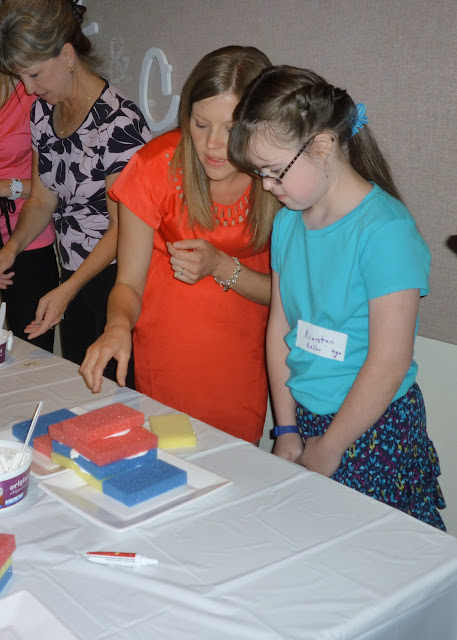 The next two were given two minutes to either finish what the first team had not completed, or to "frost" the cake using cool whip. 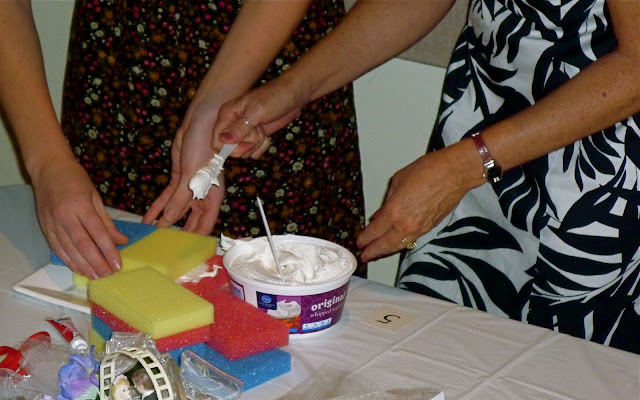 The next group had two minutes to continue the frosting if necessary and began the decorating. 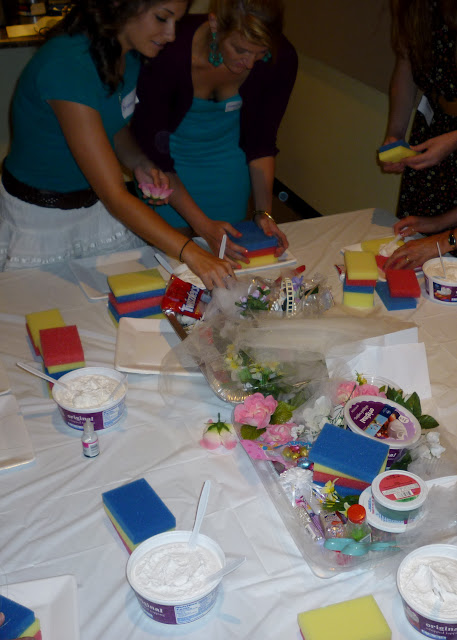 And the last group finished whatever they could and finished it off with a cake topper which they had to make. 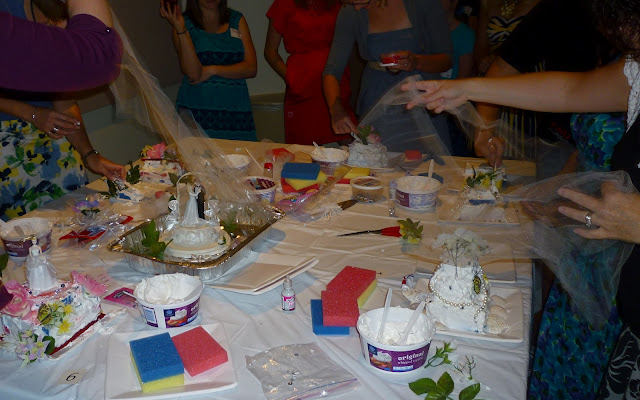 In the middle of the table we had anything and everything we could think of to decorate with: flowers, beads, sequins, glitter paint etc. 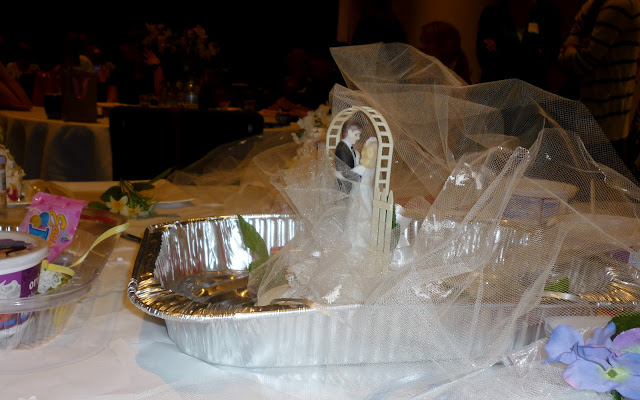 These, of course, were not edible cakes. 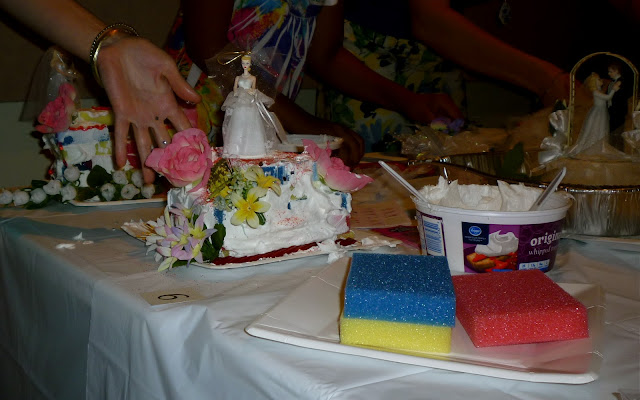 Carissa then went around and gave her "professional" opinion on each cake, 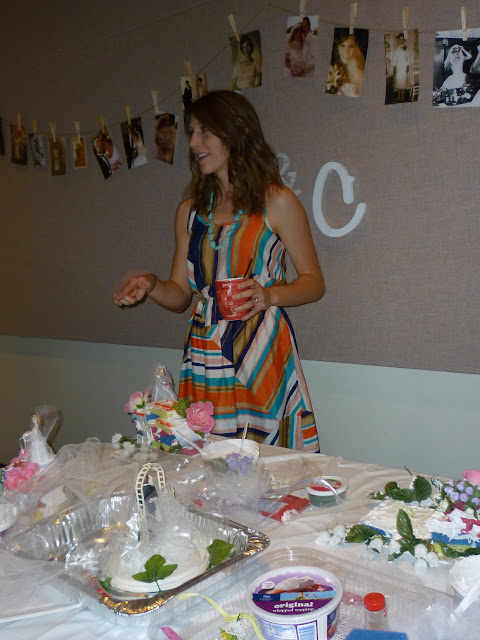 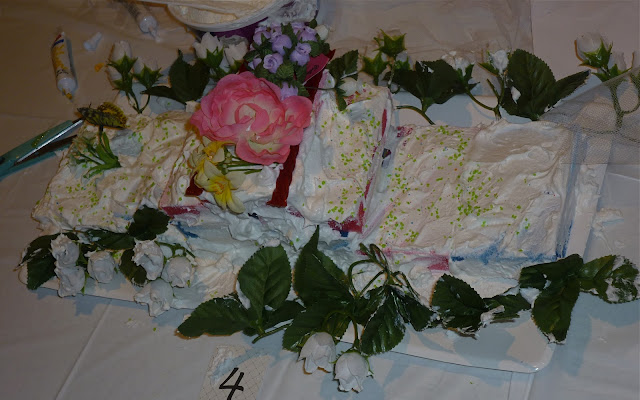 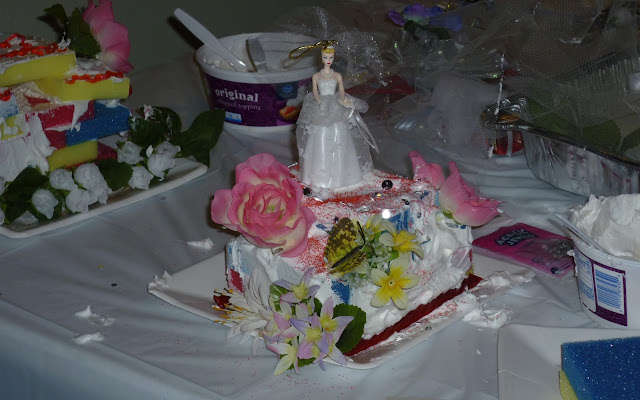 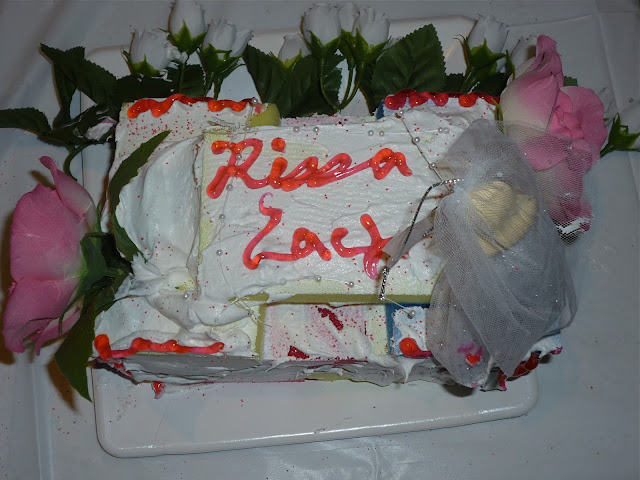 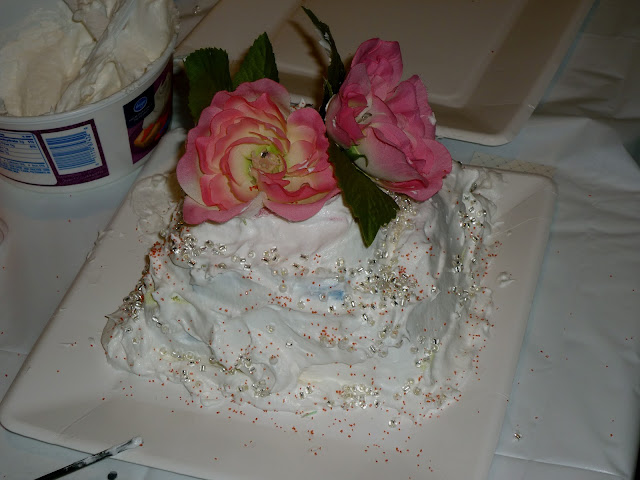 In the end she selected Table Number One's cake for it's traditional look. 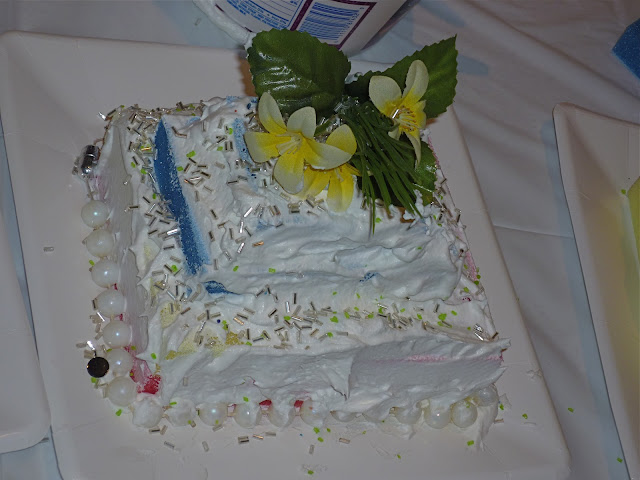 This game could also be played in more of a relay style which would also be fun and make it a little more pressure packed if you have a really competitive group.


Dad popped in before the festivities got under way to check it all out. 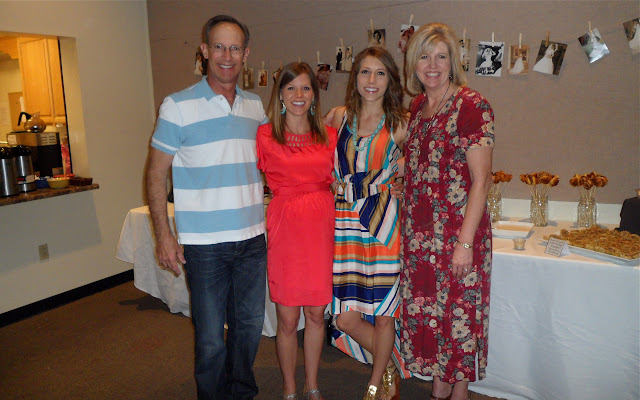 All the women from my Mom's side (minus our great g-ma) drove over from Albuquerque for the weekend. 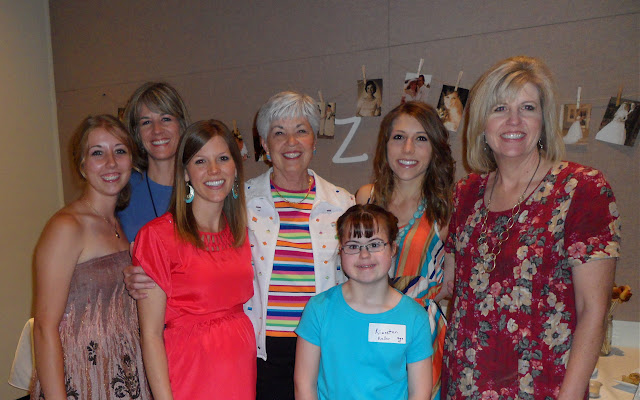 Three more weeks and we will all be together again, with men in tow and so many others who will gather to celebrate Riss and Zach.


Exciting times in our house as we prepare the final details for the big day. As uncertain as our future is, God couldn't have planned a better time for us to be home.
Posted by Cara at 7:27 AM

Really enjoyed all of this since I could not be
there. Thanks for taking the time to do it.
Love, Aunt Geri

It was an INCREDIBLE shower! Pretty sure you have found your calling :) I felt genuinely loved

Cute shower! I might take a couple ideas for my daughters birthday - like the pictures hanging and the timer while opening gifts. great ideas! Thank to people like you I am 10 times more creative now then I was a year ago! ha.