God Save the Queen

After a less than traditional London tour, we ended day one with a London classic: the theatre. 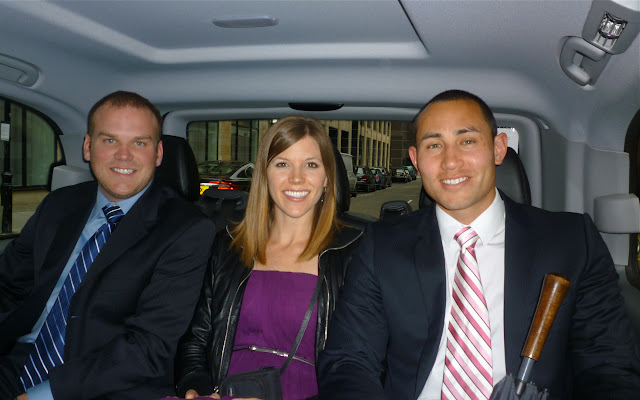 Danny, who you may remember from our weekend in Brussels, was also in London that weekend with some buddies so we all met up for Luis' and my first day, and Danny's last day in the city.


We saw the Lion King and it was pretty incredible. I'm not gonna lie though, it took me awhile to get into it, mostly because I couldn't get over the voices. Growing up on the Disney classic, I had to adjust my memories of Mufasa and Simba before I could just enjoy the show.

It didn't take long though for them to suck me in with their amazing costumes and set design. And the woman who played Rafiki (yes, woman) was incredible! I was so captivated with her voice. It turned out to be a pretty great experience.


Before the show we hit up a beloved American joint for dinner: Chipotle, which happened to be conveniently located to the theatre. Our verdict on the British version: smaller burritos, not quite as extensive of a menu, but still as delicious as ever. Especially for our homesick taste buds!


Afterwards we (and by we I mostly mean Luis) indulged in an English staple. 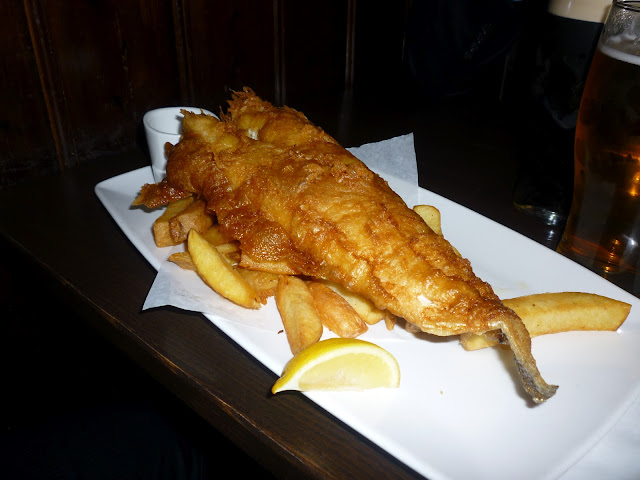 
Day Two of our trip was spent on wheels, courtesy of Fat Tire Bike Tours, another great Trip Advisor find. 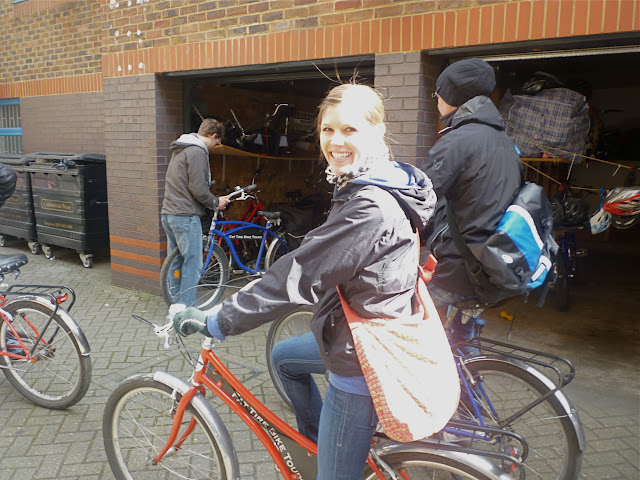 In the sunshine even if you couldn't tell from my glowing face. The forecast predicted rain, and rain came not long after we finished our tour, perfect timing.


First stop: Kensington Palace, former home of the late Princess Diana and soon to be residence of the beloved prince and princess, William and Kate. 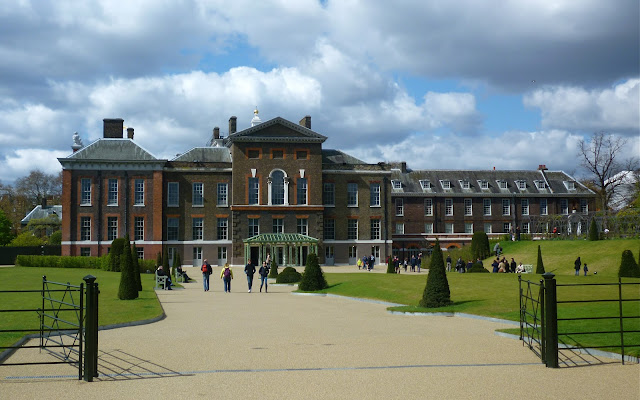 Around the left side is the gate where the well known pictures were taken of the thousands of flowers laid in front in honor of Princess Di following her tragic accident.


We rode through Kensington Gardens... 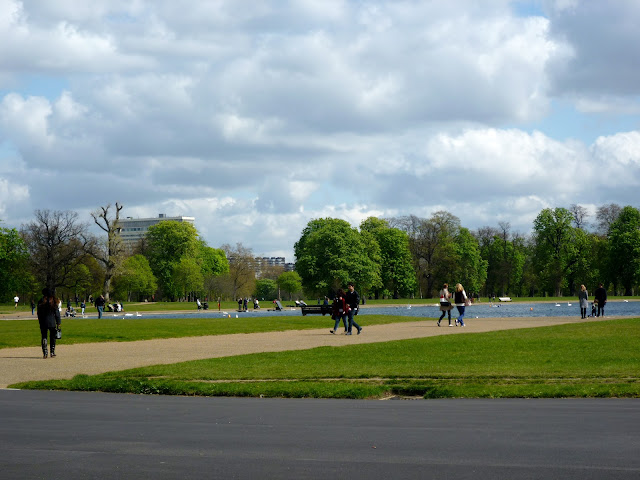 ...and crossed into Hyde Park before making a brief stop at Wellington Arch, built "to commemorate Britain's victories in the Napoleonic Wars". 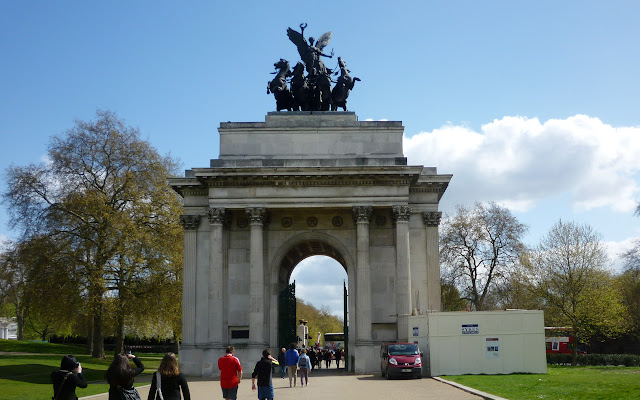 We continued on to the famous Buckingham Palace, the home (or at least one of them) of the Her Majesty the Queen. 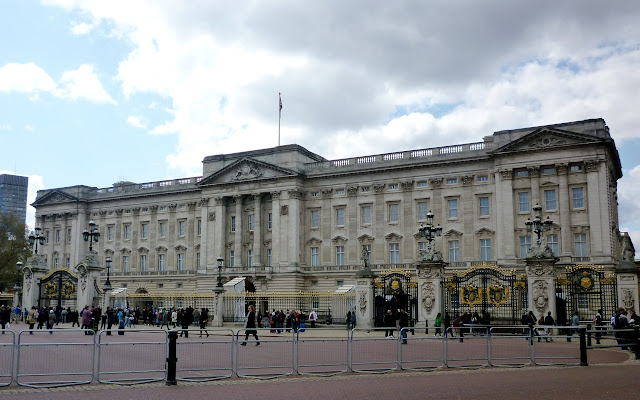 The flag pole tells you whether the queen is home or not. When the Royal Standard is flying, the queen is in residence, and when not, then she's away. Here you can see only the British flag is flying so the queen was, unfortunately, not around to welcome us into her beautiful country.


She emailed me though sending her sincerest apologies and promised to make up for it next time we were passing through so it's all good.


If you visit in the months of August and September, you can actually go into the palace and tour the Staterooms.

Our next destination was Trafalgar Square.

Surrounding Nelson's Column are 4 lions, one on each corner of the base of the monument. 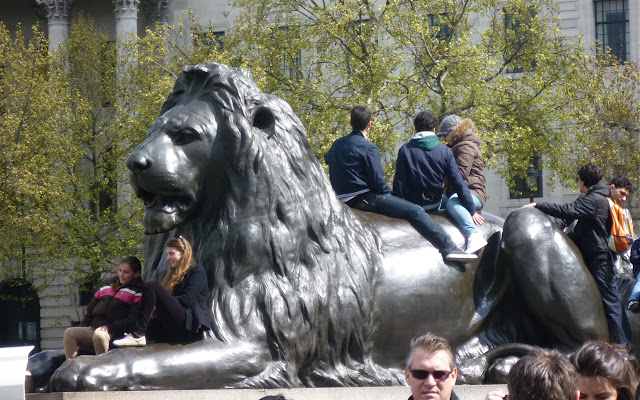 Apparently, the artist who was commissioned to make these lions had never actually seen a lion, so he used his dog for inspiration, and while from a distance they look like lions, up close they kind of have the face of a sweet labrador. 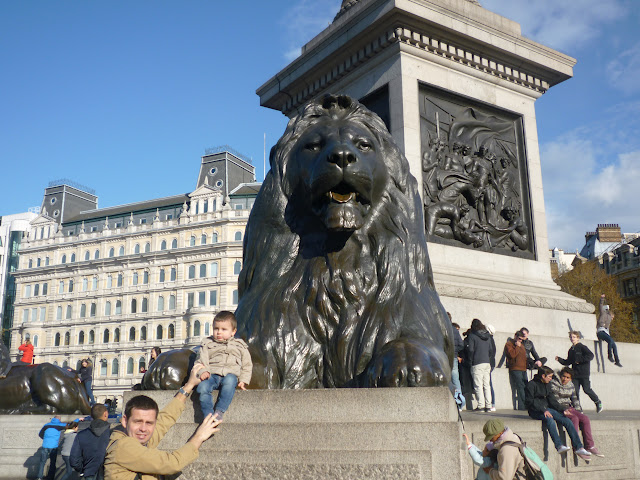 We tried to take a picture on the lion, but unfortunately it was a lot more difficult to get on than it seems, so we posed with it's bum bum instead. 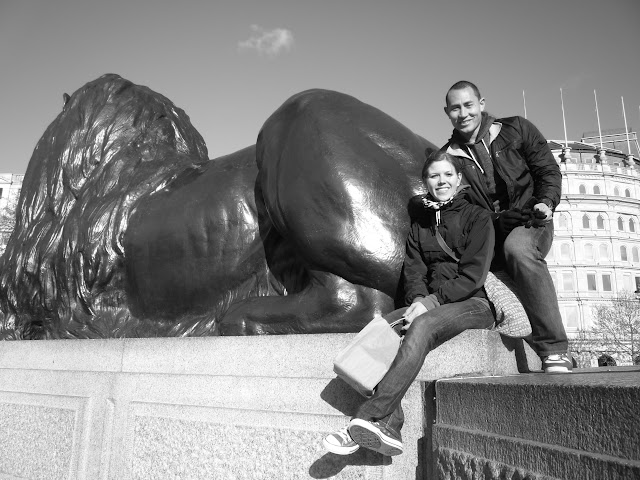 Trafalgar is home to the National Gallery, 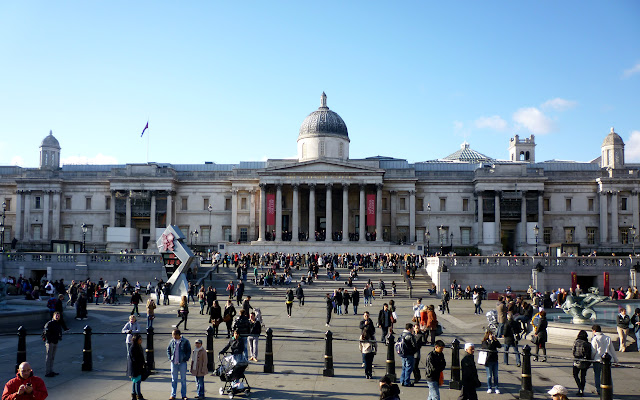 and also, at the present time, a countdown to the Olympics. 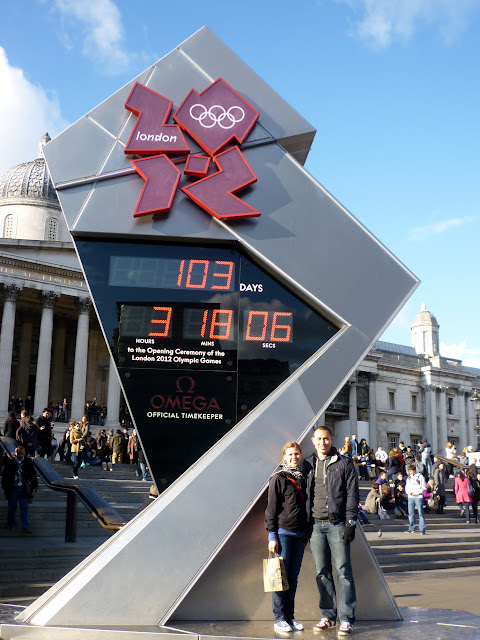 Here we have a statue of George Washington. 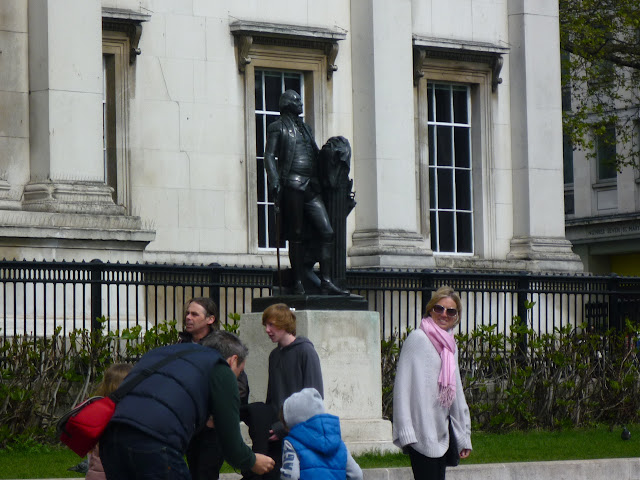 After the Revolutionary War, George Washington vowed that he would never set foot on English soil. So when King George III erected a statue in his honor upon the President's death, he respected ol' George's wishes by importing soil from Virginia to set the memorial on so that Mr. Washington would always be on American soil. Clever.


We stopped at Trafalgar for a quick lunch and decided to try out a place that we seemed to see everywhere we went: Pret a Manger. Just on Trafalgar alone, there was one on each corner of the square. And we can see why. It's a great little shop for quick and fresh food--sandwiches, salads, soups--all made fresh that day and ready to grab for a quick healthy lunch on the go.


I got the ham and cheese with a side of potato soup. 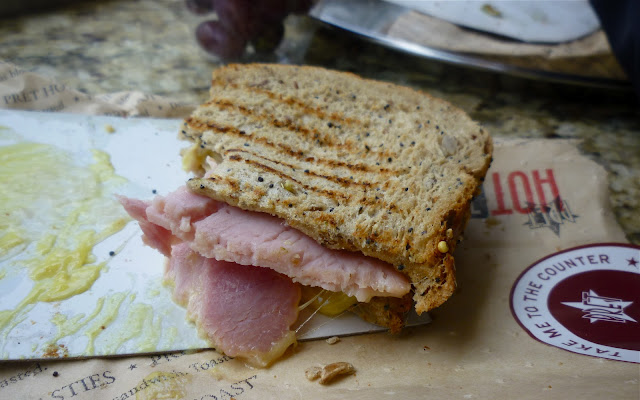 It was quite tasty. Luis got the basil mozzarella which was also really great. His only complaint was the sandwiches were a bit small/flat. So he got creative and stacked his basil mozzarella onto the other half of my ham and cheese to make a "man-sized" sandwich. 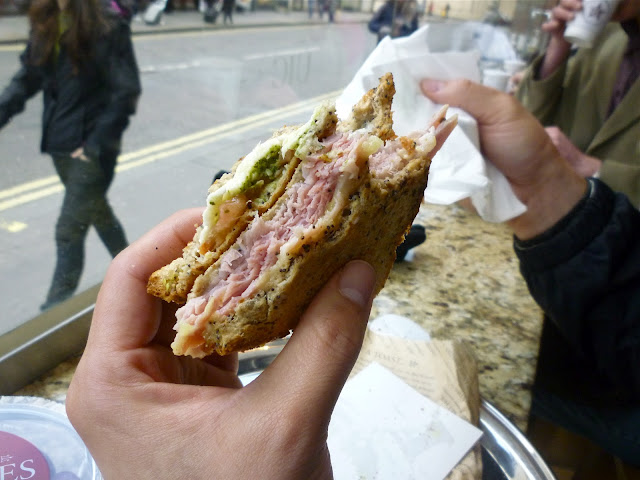 Now that is the way to go.

The tour continued with more historical sites such as the Horse Guards Parade. 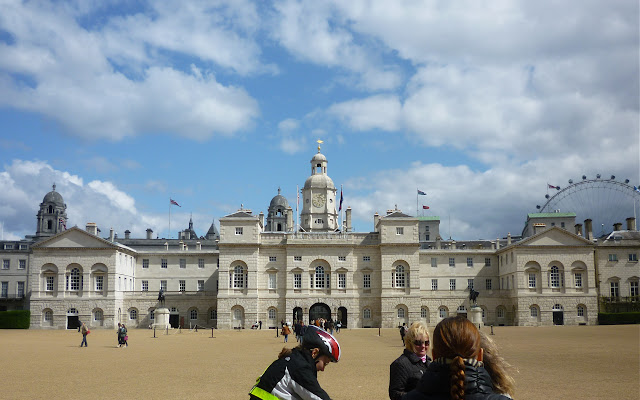 At one point in time, this open area served as the grounds upon which Charles I was beheaded. Today serves as the site for much less gruesome events, including beach volleyball this summer during the 2012 Olympics. 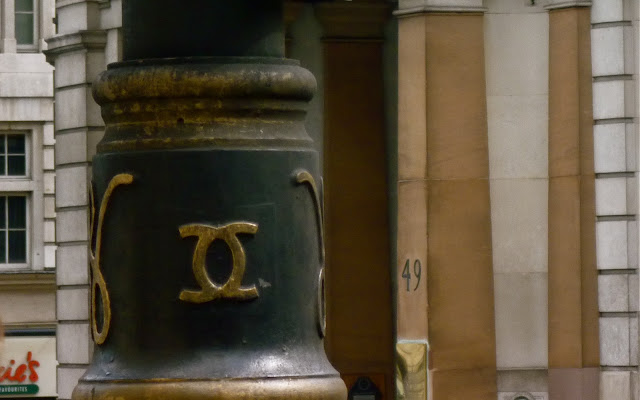 Yes, that is the Coco Chanel logo. It is stamped on light posts across the city as a sign of affection from her lover Hugh Grosvenor, the 2nd Duke of Wellington.


The rest of the tour took us by the beautiful Westminster Abbey, 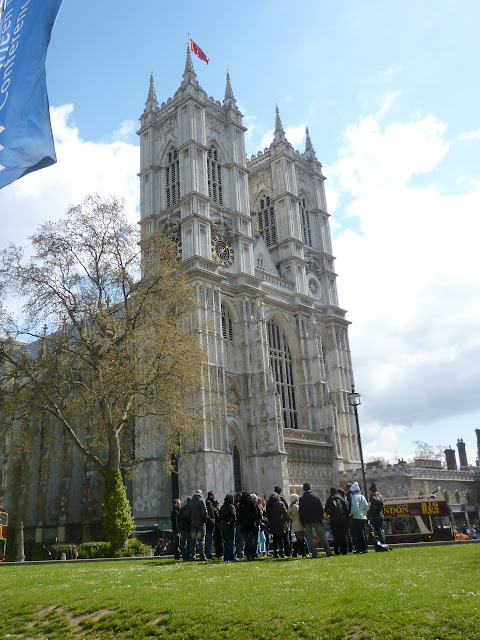 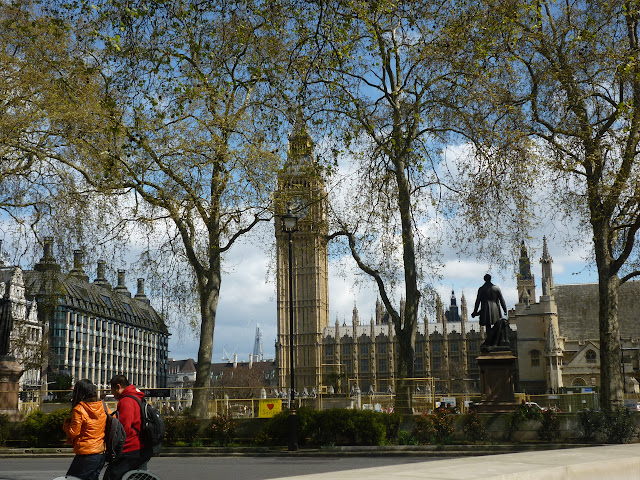 and back through St. James Park where we caught amazing views from Blue Bridge of the White Hall, 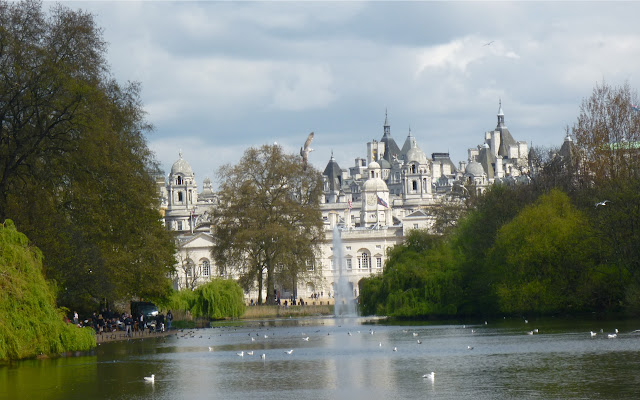 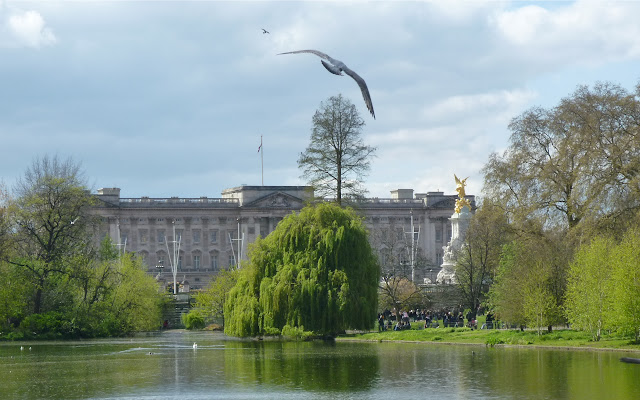 and the Foreign and Commonwealth Office and the London Eye. 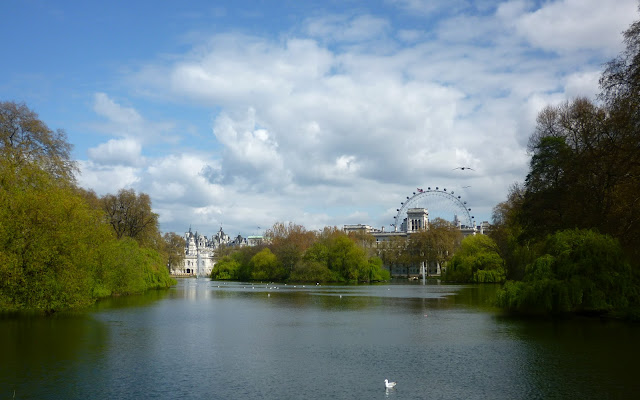 More London to come, but to conclude this portion of our tour, I just want to say that we have now done two bike tours, one in Helsinki and now this one in London, and it is by far my favorite way to site see with a guide. 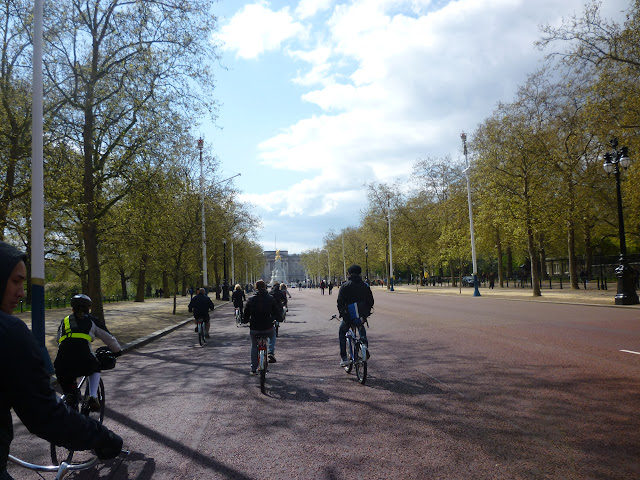 You get to enjoy the outdoors and fresh air, you don't have to hop on and off of a bus, you can take in all the sites and sounds and you get a little bit of exercise on top of it all.

Next time you're taking off for a big city, see if you can find a bike tour in the area, I guarantee you won't be disappointed! Unless you end up with sucky weather of course. Then all guarantees go out the window. :)
Posted by Cara at 6:42 PM

You make me want to go to London! It is definitely in our plans, but has yet to happen. I will probably be referencing your post when we are planning our trip.
Your blog is so refreshing and fun to read. I love it.

Brings back a lot of memories for me. I, too,
loved London and always wanted to go back. Am
so glad you are able to go see such beautiful
places. I enjoyed mt trip and so glad I went
when I did. Aunt Geri

Hail Britannia, Britannia, rule the wave! I think that's how the song goes - who knows. I recognized most of those shots. Maybe next year we'll all be there again!