Last week I gave you a teaser as to where we were two weekends ago. 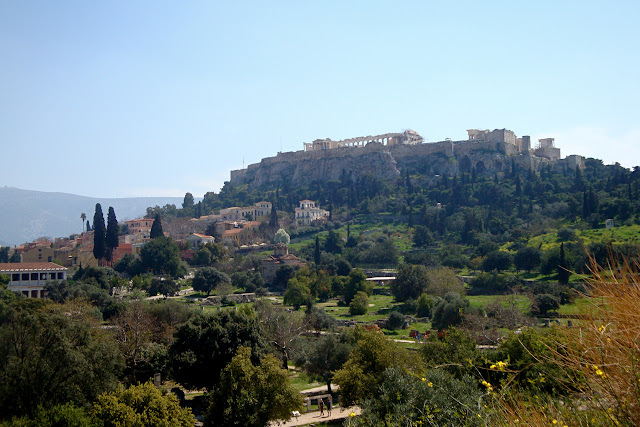 Whether you know or not, I'll give you another hint.

Wait, you mean you can't tell where we were from that picture? I'm really surprised because stray dogs such as this one were roaming all over the city. I thought for sure that would be a dead giveaway. I mean, they were the thing we saw the most of while we were there so surely they are famous or important or something.

This one in particular quietly stalked behind us for a bit, careful to keep good distance, but also to stay close enough in case we had something to offer. Or if we just decided we wanted to take it home.

Poor thing's just trying to make his way in this world.

Okay, how about this? 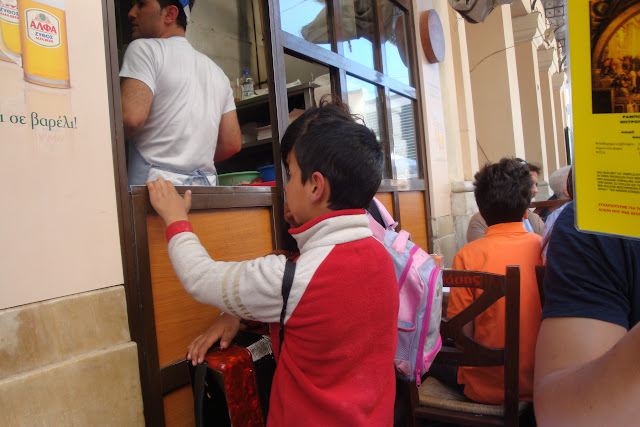 The begging kids that were dressed perfectly normal, in clean clothes, looked well fed, and yet somehow they find it worthwhile to go around playing their accordions looking for handouts.

One (very LARGE) kid even came to us, bag full of really great fresh vegetables in hand, to include the biggest cauliflower Luis and I have ever seen, rubbing his (very round) tummy asking for a bit of my chicken sandwich.

Now, if I'm being totally honest, I would take a chicken sandwich over cauliflower any day. I can't blame the kid for trying. But it was hard for us to feel sorry for him when did NOT look like he was starving by any means.

If anything, he could afford to eat a little more cauliflower and a little less chicken sandwich and fries if you know what I mean.

But really the kids in the place blew me away. They were so bold and manipulative. They would hop from subway to subway, playing a bit of music then walking through asking for money. Some would try to look sad and poor. Others had no shame. They'd just walk up, stick their hand out and expect you to fill it.

I couldn't figure out, 1. where they got the idea for this begging business...do the parents put them up to it? and 2. how this was productive for them because out of all the kids we saw, only one time did I see someone give them a couple of coins.

In fact, we saw far more kids get sprayed with water by this restaurant owner (the man with his back to us and arms crossed) than any that got money. 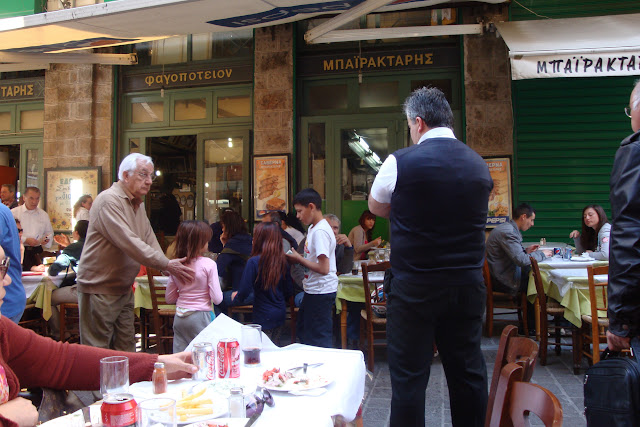 They must hit it big in the summer months when all the tourists are there I suppose.

Alright, enough of the comical oddities of our tour. On to what we really came to see. 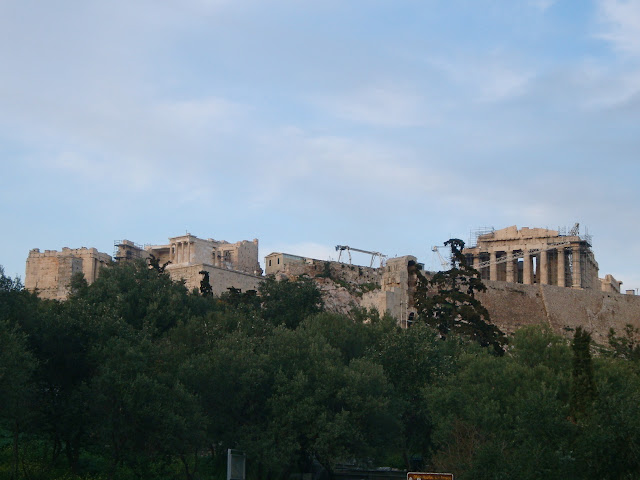 That would be the Acropolis in Athens, Greece, which is where we spent a wonderful whirlwind of a weekend two weeks ago. In case you hadn't figured that out already.

I actually had been to Athens before as part of a cruise in the summer of 2008, but I find it's always nice to go back to cities I've seen on cruises and explore a bit more. Wander. Get lost. Not be on a time schedule.

And it's especially nice going when the place isn't crawling with people.

March is the perfect time to go in my opinion. The weather is great; sunny and just hot enough that you can go without a jacket, but not too hot that you're sweating. Another major bonus is that the crowds are quite small. I could actually take a picture this time and not have a thousand people in it.

Just check out the difference a few months makes in tourism.

June in front of the Parthenon

March in front of the Parthenon.


Crazy difference. Unfortunately, while there's not a ton of people in the second pic, there is a GIANT crane in front that kinda ruins the view.

Here's one taken from the back though that has minimal people and minimal construction.

Now one thing that I kept getting confused on before we went to Athens was what was the Acropolis and what was the Parthenon. I guess Most of you probably already know this but I apparently must have forgotten from my first trip and had to look it up. Even that was confusing though because when I googled "Acropolis" and "Parthenon" and compared the images, I (obviously) couldn't figure out the difference because they were the exact same images.

I know, I know, stop laughing, but I'm just being real here people.

It turns out, the Parthenon, is the structure featured above and the Parthenon sits atop the Acropolis. The Acropolis is actually a flat rock upon which the ruins of several ancient Greek temples rest. 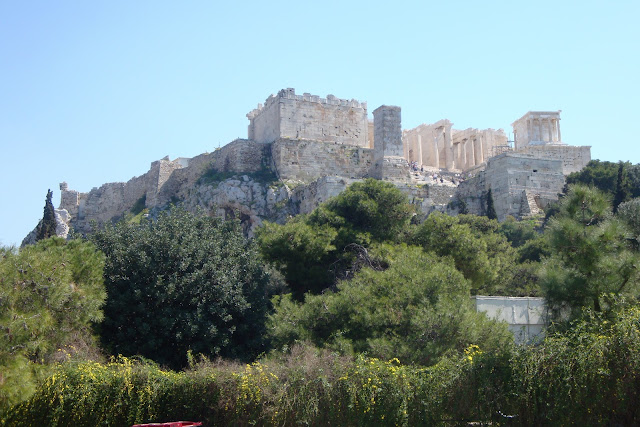 I've linked the ones below to Wikipedia if you want to do some further reading on any of the structures shown. 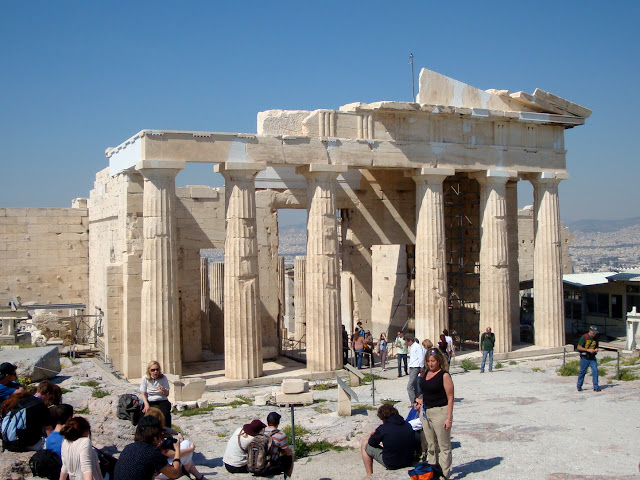 Looking down into the theater. 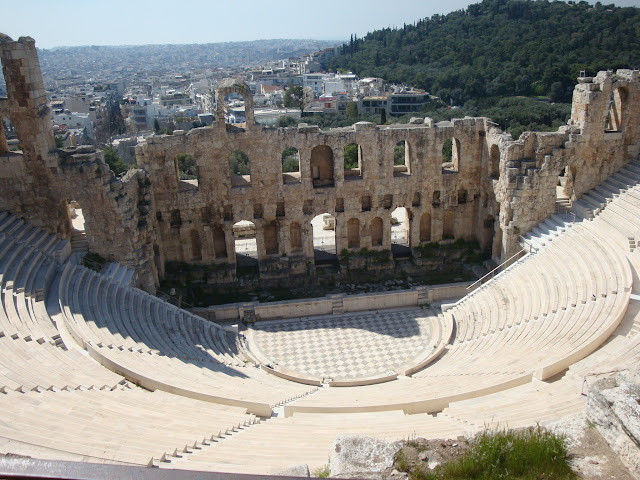 There were so many ruins but I'm not sure if all, or any for that matter, of them corresponded to something that was recognizable on the Site Plan or if they were simply pieces of the temples that had been gathered to one area. 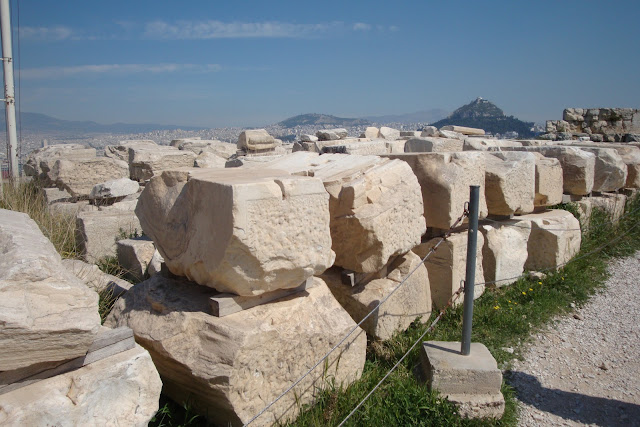 Wikipedia shows a good layout of all of the sites if you're interested in becoming more educated on these matters than I am learning more. 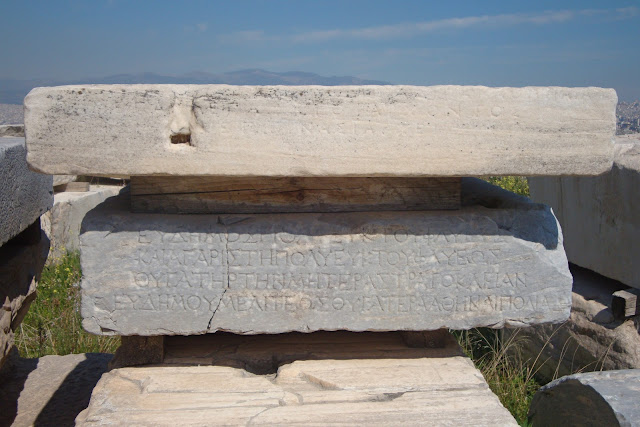 Many of the structures listed have not been reconstructed. 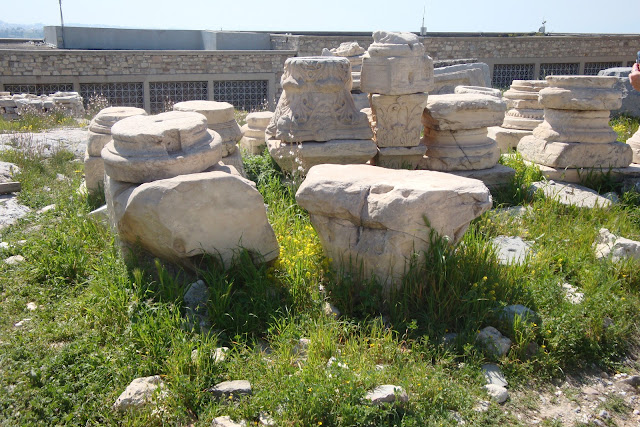 This next picture has absolutely nothing to do with anything we are talking about here, except for the fact that this was taken on top of the Acropolis... 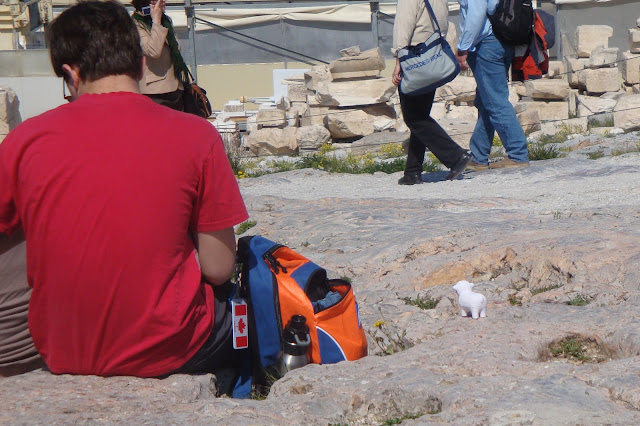 This lamb is super cute and all but just what is its significance to this guy and why was it so honored to have it's picture taken in front of the Parthenon? Oh the things that keep me up at night....

The Acropolis affords some great views of other ancient historical sites... 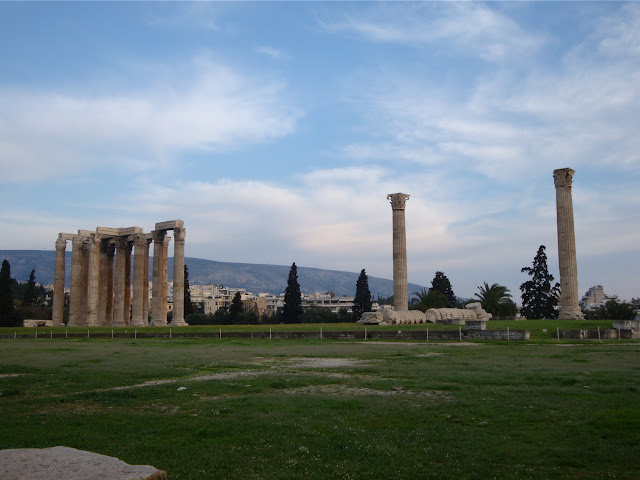 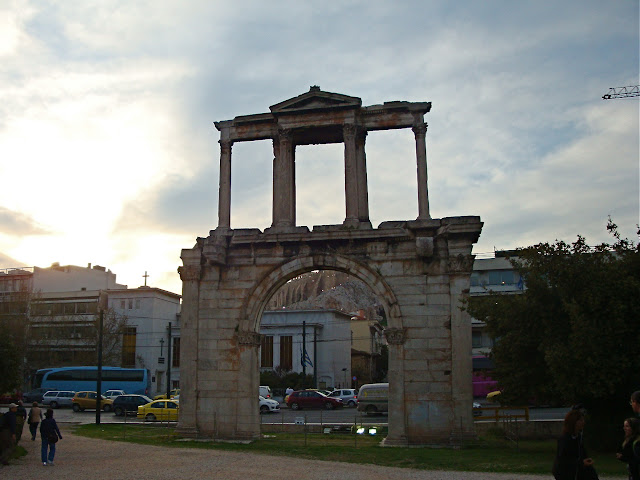 Here is the Stoa of Attalos, which actually this picture isn't taken from the Acropolis, but it can still be seen from up there. 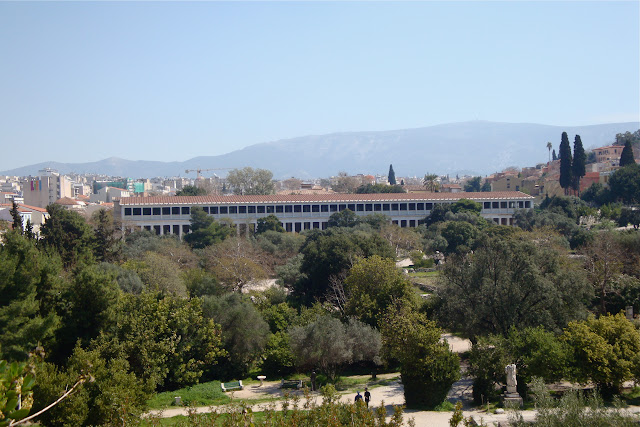 Atop the Acropolis you can also get a feel for how very large the city is. 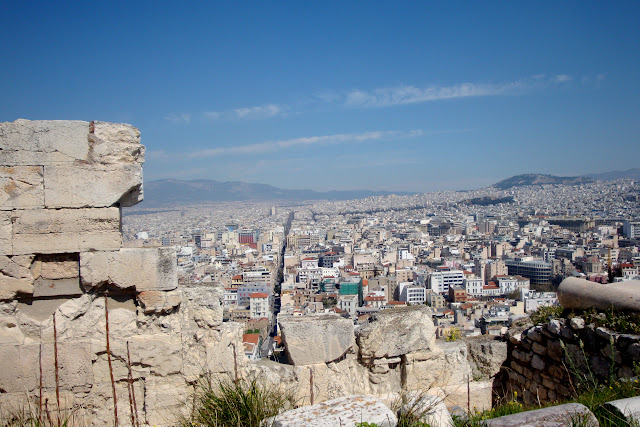 Athens sits sort of in this bowl, rimmed by mountains and coastline, with the Acropolis situated relatively central. 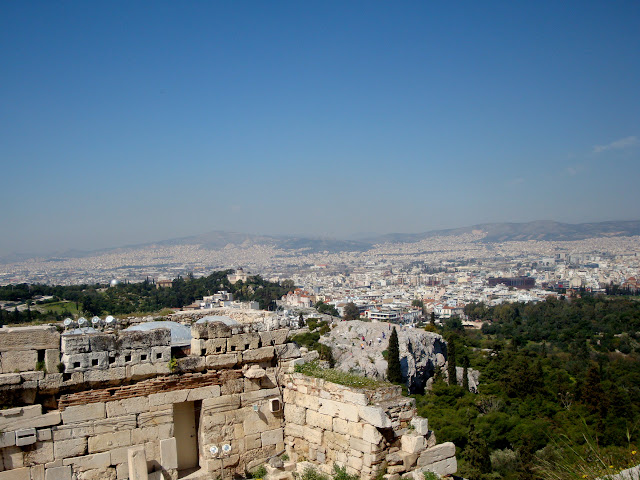 It's easy to see, how back in the day, this would have been the perfect location for defense and shelter to protect the king's palace, which was the original use of the rock before the temples were built in the 6th century BC.


Whew, that was a whole lot of pictures and I still got so many more for ya'! But they will have to wait for another day as our apartment is calling me for a much needed deep purging of STUFF.


The fun is over and the work is on. Happy Wednesday!
Posted by Cara at 12:14 PM