Not last weekend, but the weekend before that (gosh this post is happening way later than planned!) we packed up once again and took off for one of my all time favorite cities. 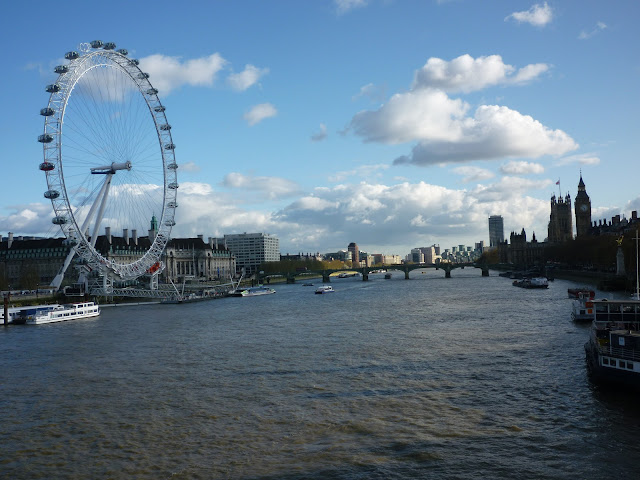 
And I have since I was ten years old when I was blessed with my first international experience to this great city thanks to these wonderful people right here. 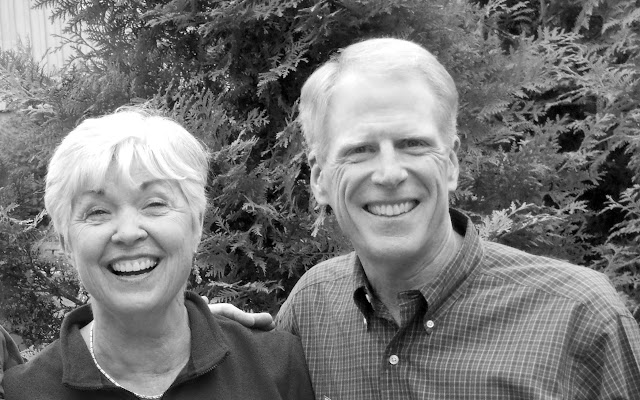 
Papa had planned a surprise for Nana for my parents and my aunt and uncle to fly out and visit them in London while he was there for work.


My dad for some reason wasn't able to go so they asked me if I wanted to go. I of course said yes. Then, for whatever reason, my dad was able to go and they didn't have the heart to tell my ten-year-old self that I couldn't go anymore. So they let me tag along with all the adults.


And am I ever glad they did. I fell in love with every aspect of London, and at that age, was especially captivated by the whole fantasy of royalty. Princess Diana was still alive at that time and I was convinced I was going to marry Prince William and she would be my mother-in-law and we'd live happily ever after.


Oh the dreams of our youth.


We went back again my sophomore year of college so that my sister and cousins (who were only 4 and 2 at the time when I first got to go) could experience the magic that is London.


My sister still hasn't forgiven me for the fact that I got to go way back when and she got left at home.


I could visit London a thousand times and never get sick of it. And since Luis had never been there we thought last weekend was the perfect opportunity to pop on over for a few days.


Five minutes into our trip I looked at Luis and said "I loooove London." And he said "I do too!"


That's all it takes people to realize how awesome this city is. Five minutes. No joke.


We packed a lot into our two days there and today I want to share something that we did that is a little more off beat from the traditional sites. 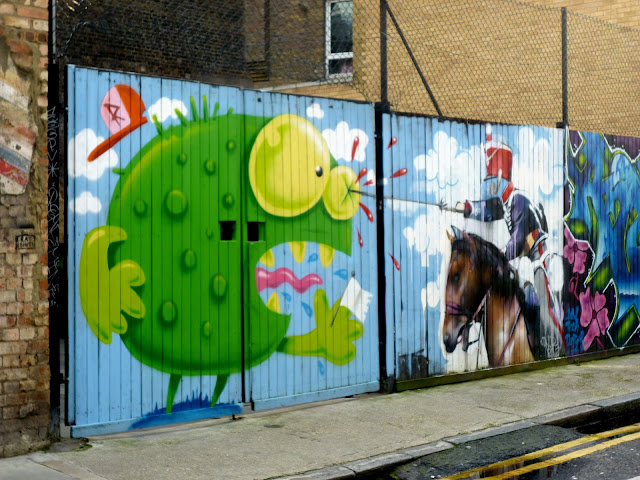 Street art in the East End. 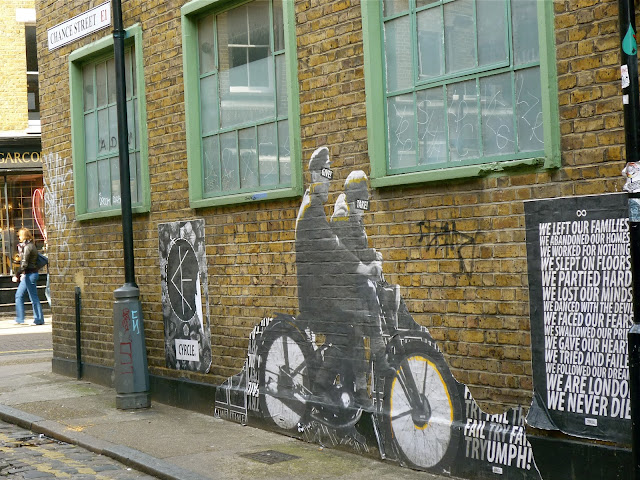 Before we go anywhere we always check out Trip Advisor for the best restaurants, hotels and the best things to see and do. And to this day we have yet to be disappointed with anything we have ever tried from the site.


The #1 tour listed on Trip Advisor is called the Alternative London Tour. It takes you through London's "creative hotbed" covering the history and culture of London's East End with some really amazing street art mixed in along the way. 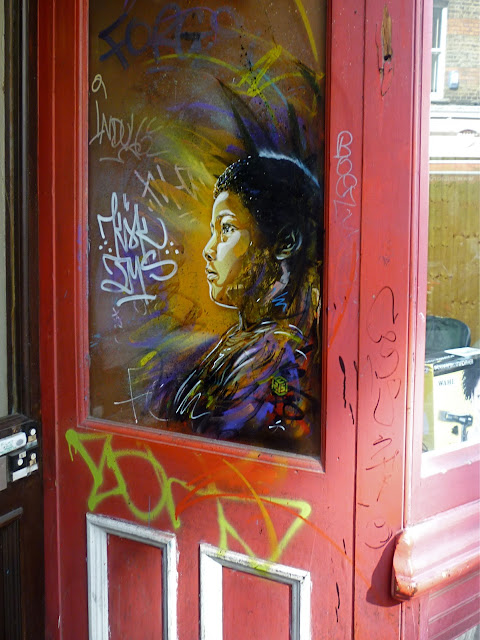 This is not your typical grafiti. These are works of art created by very talented people, and often have some kind of message or political meaning behind them. It's often referred to as "smart vandalism". 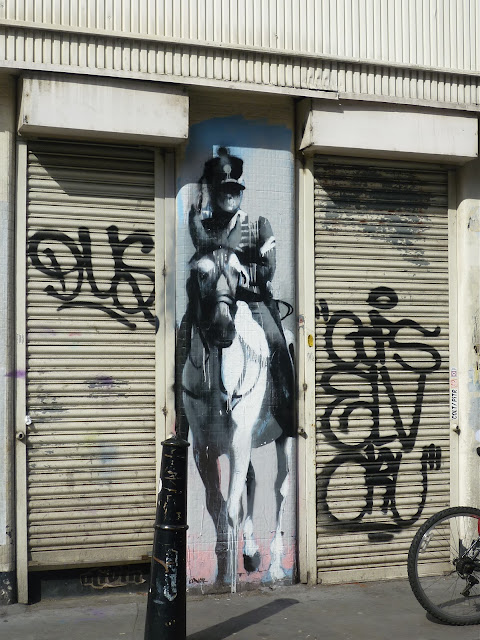 The guy behind the painting above grew up on rap music and draws upon it for inspiration. How does a man on a horse reflect rap music you ask? Good question. According to our guide, this artist was tired of the machoism of rap music. In his paintings he depicts very strong, traditional masculine figures, yet the face is always unclear as if to say, "you can put on this male bravado but that doesn't make you a man". 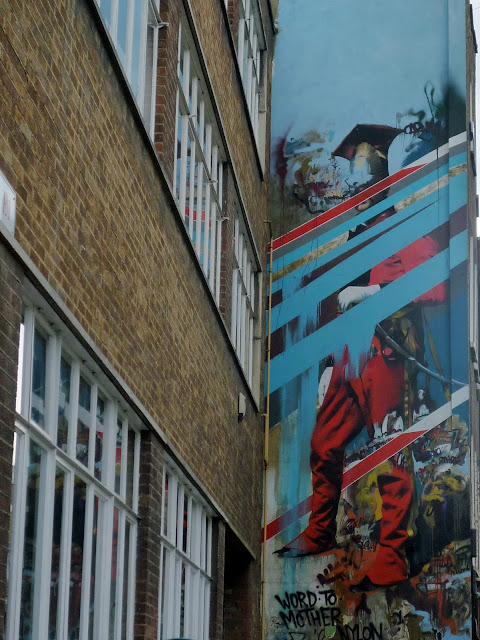 
This crane was created by ROA. It is an impressive piece of art that took nearly 8 hours to complete. 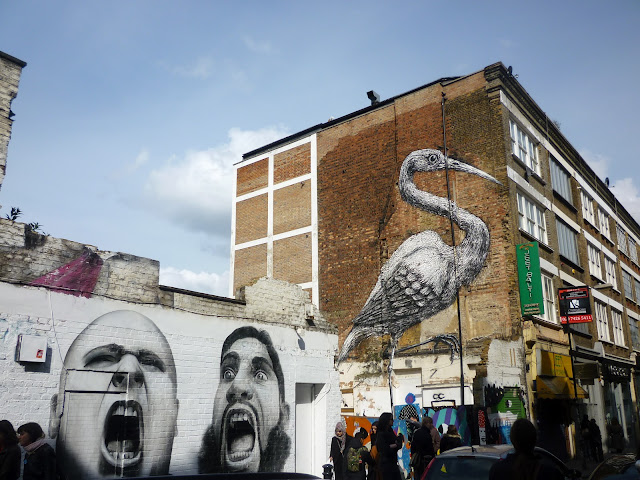 The two screaming dudes are the work of Ben Slow. On the left, you see a white nationalist of the English Defense League and on the right, an Islamic extremist.


His message was that, while both sides are arguing different points, they both are just full of anger and therefore don't really look all that different from one another. They each represent two extremes, yet in reality they both represent the same thing: intolerance and hatred.


I don't remember the story behind this one, but he seems to be angry as well. 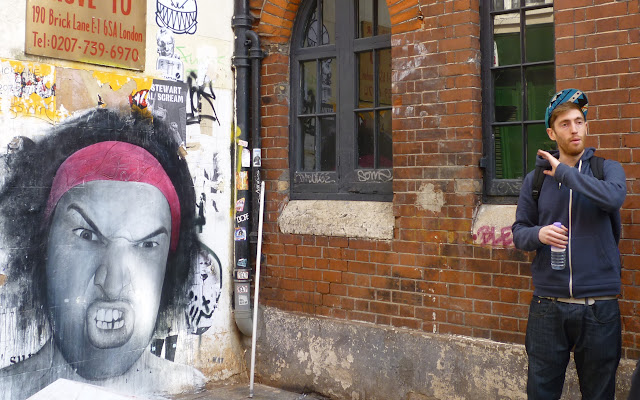 Sometimes you have to keep your eye out for little hidden gems. Like this sweet little panda right here who is hanging on for dear life. 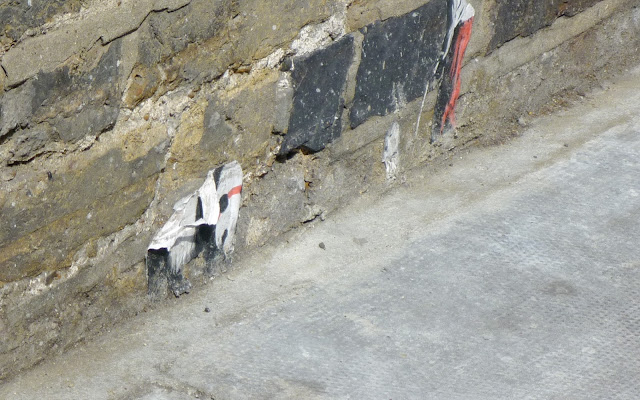 This piece is done by a French artist who goes by the moniker C215. 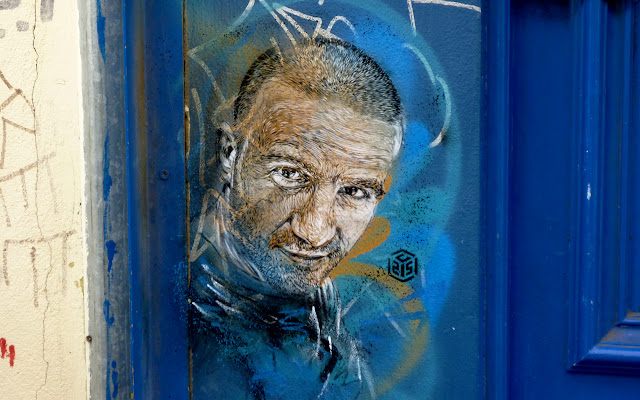 He uses stencils to create the fine details of is work. Stencils enable street artists to put their work up quickly and inexpensively.


One thing that's interesting about street art is it's always changing. Artists create their masterpiece but overtime it gets painted over either by the authorities or other artists.


This guy, Alexandre Farto, however, wanted to ensure his piece would last. So he chiseled his art straight into the wall. 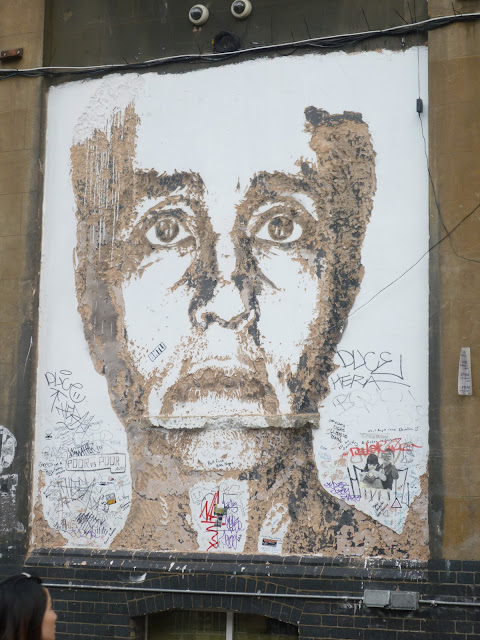 Most artists stick to the more traditional medium of spray paint. 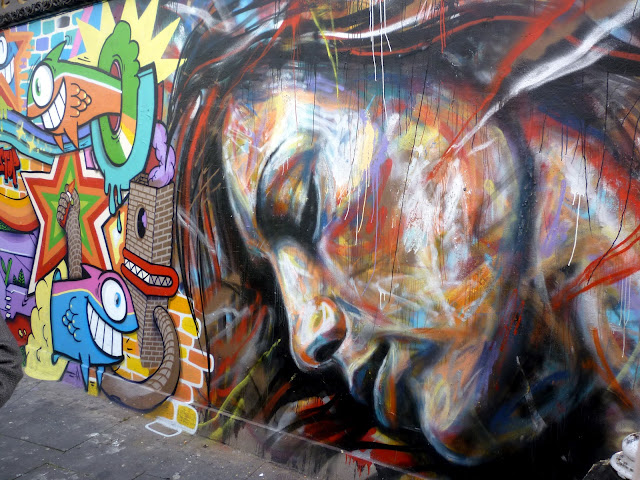 It really amazes me how they are able to create such beauty and detail with a spray can. 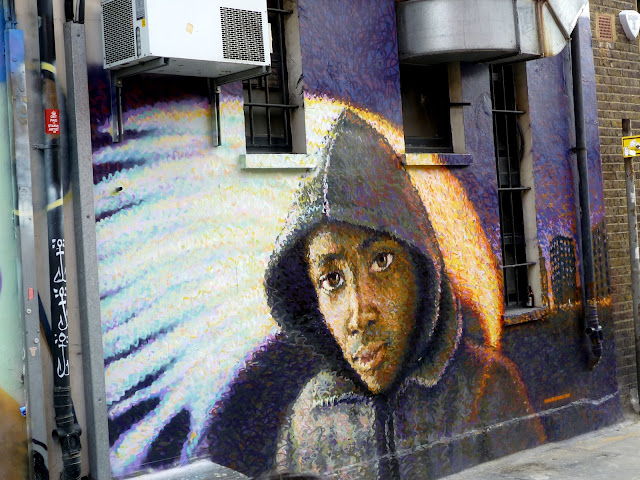 This one seems to just be squiggle line upon squiggly line. Incredible how he pulls it all together into one amazing piece of art. 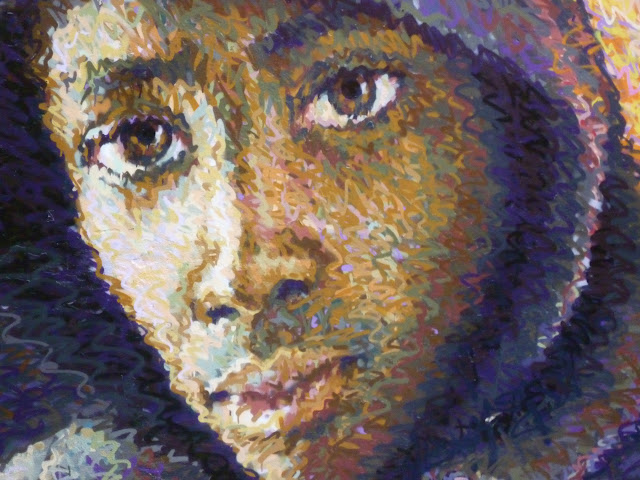 This cowboy is located opposite a street light and apparently at night the entire street is dark but this face really stands out and takes on a life of it's own, looking as if the shadows of the hat are really there. 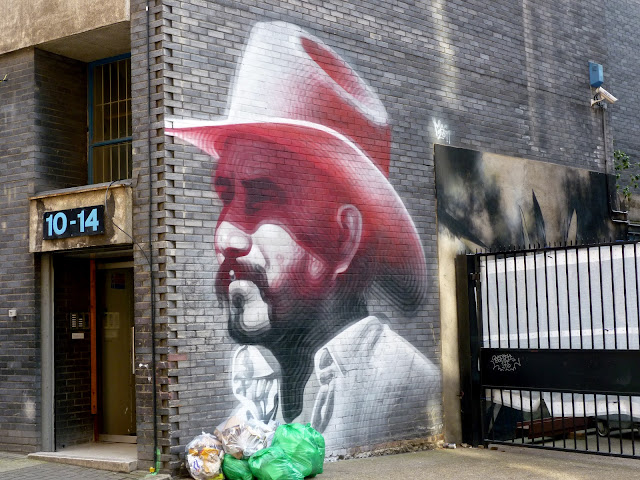 It just amazes me that they can visualize and create things like that. 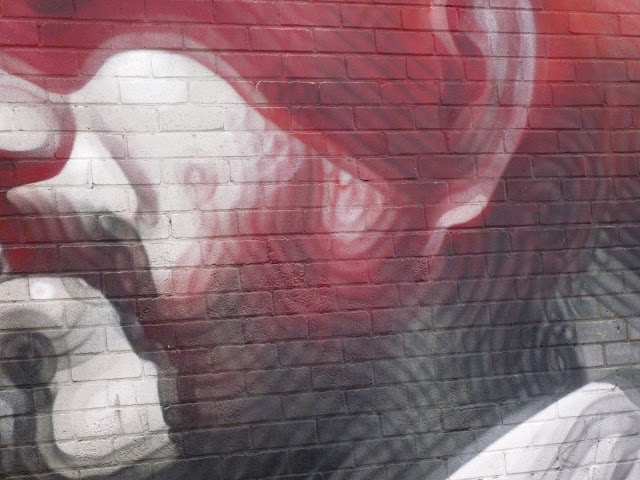 And here's a few more that we liked... 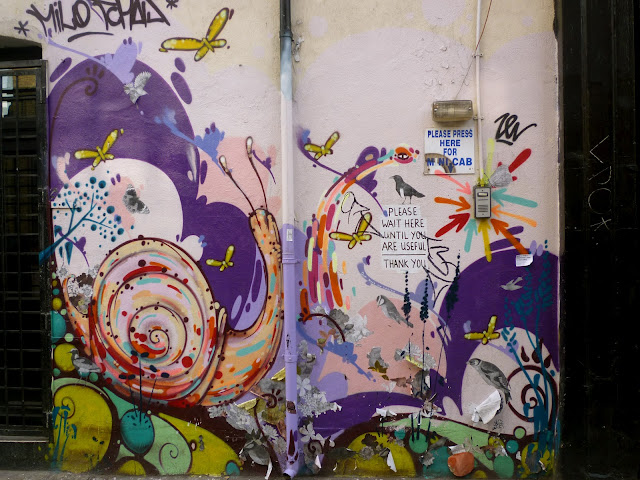 Love the vibrant colors on this one. 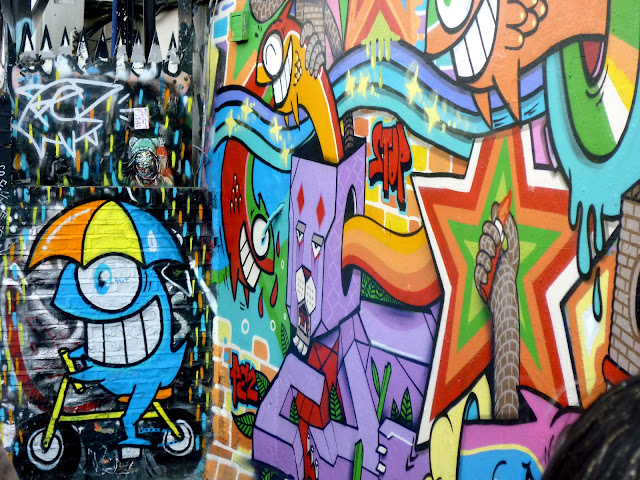 This car was a gift from one of the most famous street artists in the world: Banksy. 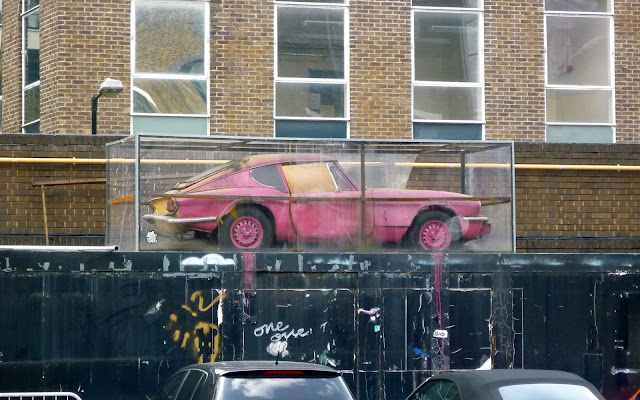 After experiencing some success he decided he would treat himself to a fancy car. But then apparently he decided it was a bit flashy for him so he donated it London's East End.


There used to be a strange character in the driver's seat, but someone broke the window out and stole it so they patched it up and protected it with some sort of case.


The white alien looking thing is done by a French artist named Invader. He draws inspiration from the Space Invader game. 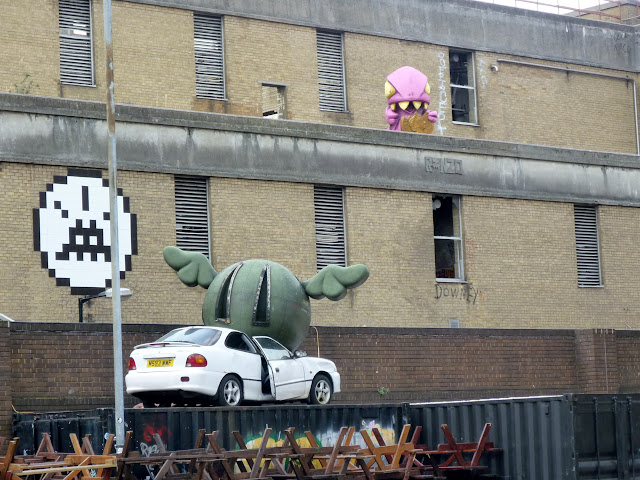 According to our guide, if you find all his little space invaders in Paris and mark each one on a map of Paris, at the end, your map will form a picture of a space invader.


These may look like hooligan doings, but these guys are pretty intelligent--in a very non-traditional sort of way of course--if you ask me.


Another political-ish sort of piece... 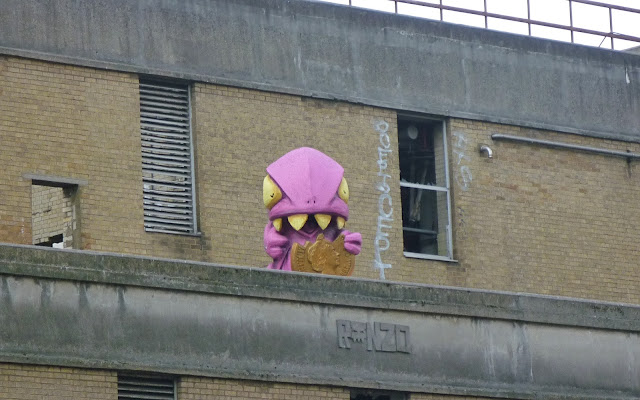 in honor of the most recent financial crisis, the "money eating monster". You wondered where your money went in the crash? He ate it apparently.


This piece was done by Mobstr. 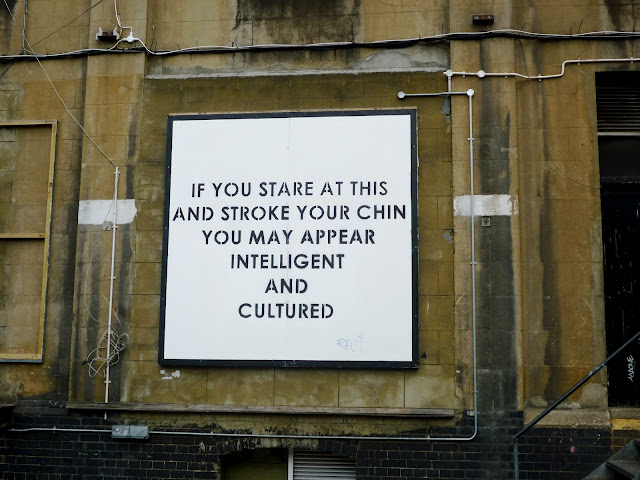 He's known for his smart (insert mildly inappropriate word here) posts such as these where he had a show down with the London authorities who's mission is to paint over the street art.


The authorities solution to removing street art is to paint it as has been done to this wall here. 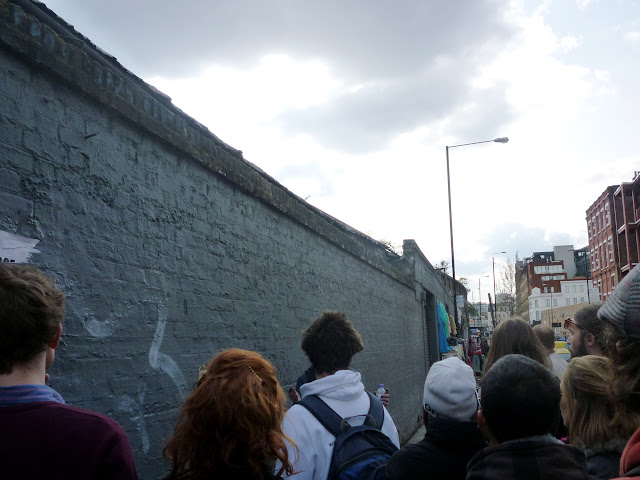 I understand their frustration with the street art, but in my opinion, it looks a heck of a lot better than that ugly, drab grey they use. The wall just seems to be painted so sloppy and really devalues the are. This is part of the argument of the people trying to preserve street art in the East End, that the street art brings culture and a life to the area that is embraced by those who live there and painting over it just brings everyone down.


Back to Mobstr, here we see one he posted in response to the authorities threats that "vandalism" is a crime that violators will be arrested for. 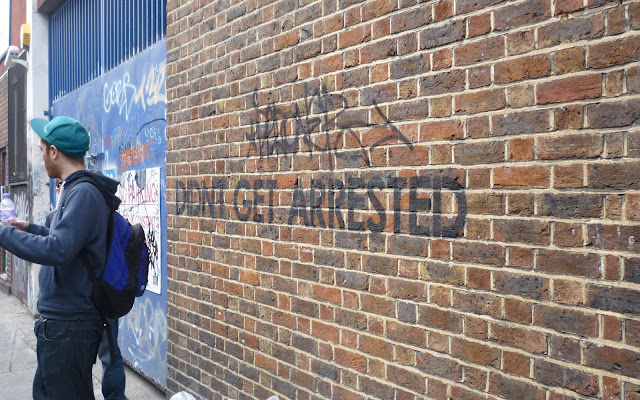 He apparently just wanted to let them know that he didn't get arrested.


And, two last shots before I finally wrap this post up and can move on to my next post on our London adventures... 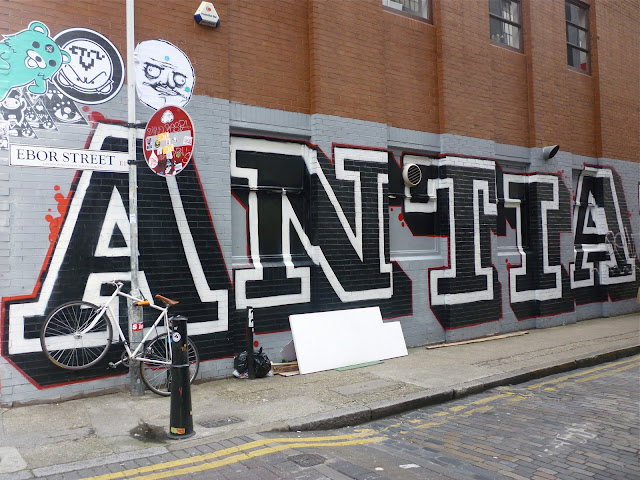 "Anti Anti Anti" spans the length of this building side. It was done by an artist named Ben Flynn who goes by the name "Eine". He is technically a "retired" street artist and now mostly paints with permission, either on street walls or in galleries.


If I remember correctly from what the guide said, this piece was not done with permission, but rather Eine was asked by another artist to make it as part of the Anti Design Festival.


The business across the street decided looking out at "Anti Anti Anti" every day was a bit of a downer, so they commissioned Eine to do the other side with something a bit more positive, thus giving birth to the "Pro Pro Pro" side. 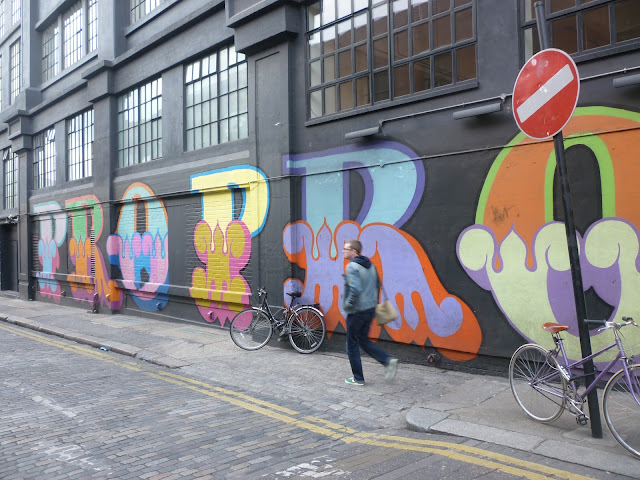 This really was such a fascinating tour, not just because of the art, but also because of the culture and diversity of the East End. There's a movement going on to preserve and revive the East End, and yet on the other side there's a push to transform it into something more commercial and modern.


Just a couple of blocks separate this.... 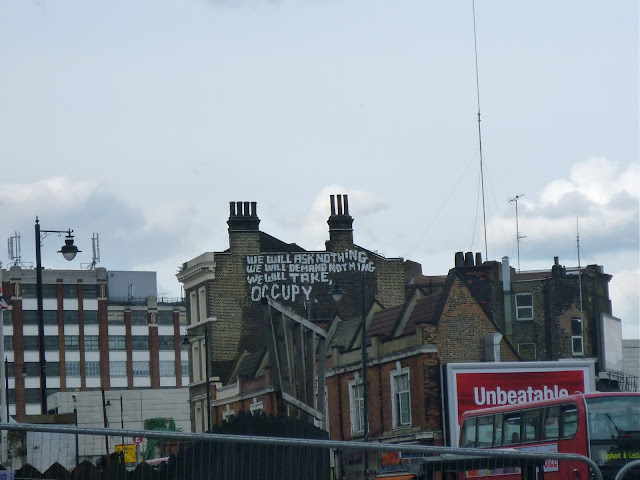 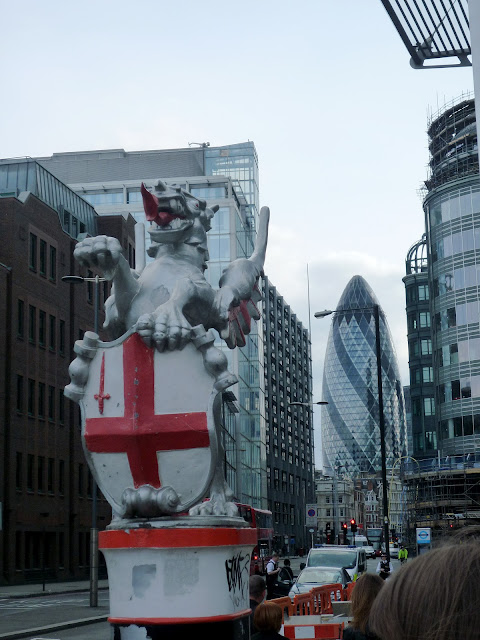 I'm referring to the modern architecture of course, although the statue in the foreground is interesting because it marks where the gate used to stand signifying the entrance to"true London" during the reign of the Roman Empire.


I just love all the history packed in to this city, and especially how they have managed to balance the history and traditions with the new and the modern. Hopefully, in the tensions over the East End, they can continue to find that happy medium so that all parties involved are in agreement.


More of London to come in the next few days...until then, have a great weekend!
Posted by Cara at 8:36 AM

Well, while I didn't see any of the BIG Bus plastic ponchos, it was still a very interesting blog today. When we go again (maybe next year) you can be our tour guides for London's East side. I'm glad we were able to introduce you to something that we love very much also. Someday you can take baby joey there and share your story from so many years ago. :o)
Love,
NB

It's fun to think that we started you out on your love for Jolly Old England. Maybe next year we can treat you to more of the sights and sounds of the British Isles. GOD is so good to allow us to experience so many fun times together. May you guys keep passing on the heritage to travel and explore to baby Joey. NB