According to my husband, our apartment looks like a pumpkin patch. 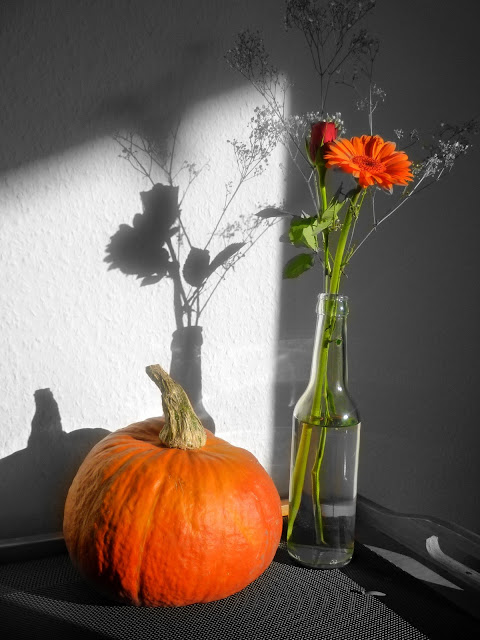 Those flowers by the way, they're from my hubby. And they're all over our apartment. Such a sweetheart, that guy of mine.

I may have gone a little overboard with the pumpkins this year. But I've discovered the amazing-ness of freshly cooked pumpkin and I just can't stop.

I don't know why I am just now realizing the power of the pumpkin. Especially since I grew up eating, and enjoying, pumpkin flavored things.

I suppose I didn't really realize how great pumpkin was because of a little thing we have in America called Libby's 100% Pure Pumpkin. In true American fashion, we have taken the pumpkin and made it easily accessible and convenient.

So I guess I can thank Germany for helping me realize how great fresh pumpkin is because you see, last year, when I was craving all things fall and specifically, a certain special pumpkin cookie that a certain someone special makes (aka my Mama) there was no Libby's 100% Pure Pumpkin to be found.

Desperate for the cookies I got inspired and decided to roast a pumpkin myself. There are so many varieties of pumpkins here that I didn't really know which one to pick. So I went with what I knew, the big ol' Jack O'Lantern pumpkins. 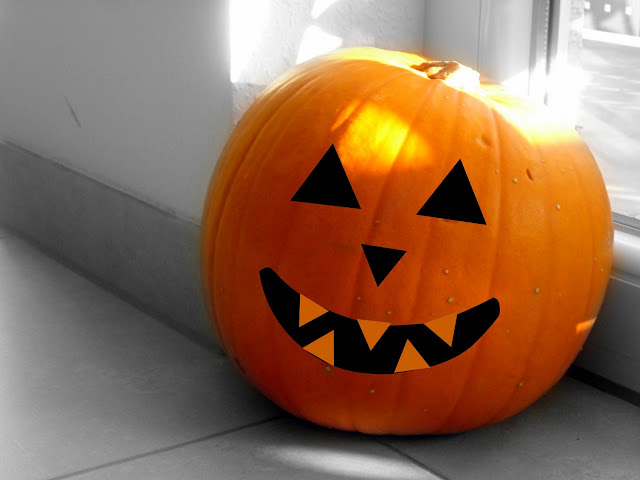 Outside of cutting it, the Jack O'Lantern pumpkin is quite easy to roast. And it made great cookies. The only problem was that I wasn't so impressed with the flavor of the actual pumpkin itself. In fact, I froze a batch and when I pulled it out to make soup a few months later, it was borderline disgusting. Guess I should have paid attention to everything I read online about choosing the smaller, sweeter pumpkins.

Fast forward now to this year. A few weeks ago we had pumpkin soup at our German teacher's house, and I got the inside scoop on the pumpkin family. They told me to buy the Hokkaido pumpkin that you saw in that first photo.  Then they told me to put it in a pot of boiling water. 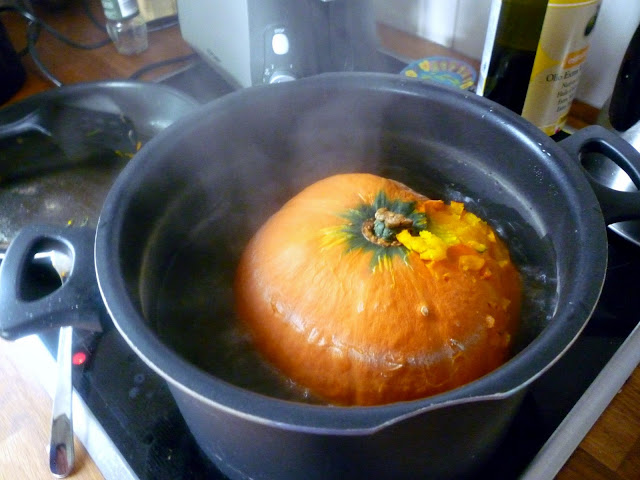 Boil it for an hour to an hour and a half, or until a butter knife slides in easily, and you're all set. Simply drain the water, put the pumpkin on a cutting board, scrape out the stringy things and seeds, place back in pot, and puree. And that's it. 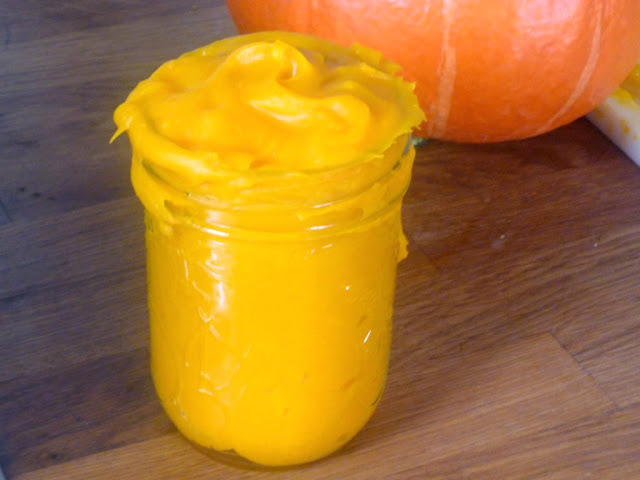 You can also roast it in the oven, although, I didn't like the results as much but I think that had more to do with the fact that it was a different kind of pumpkin than the method.

The pumpkin on the left was a Gorgonzola pumpkin, and I roasted it in the oven. It turned out to be more watery and didn't have as rich of flavor. 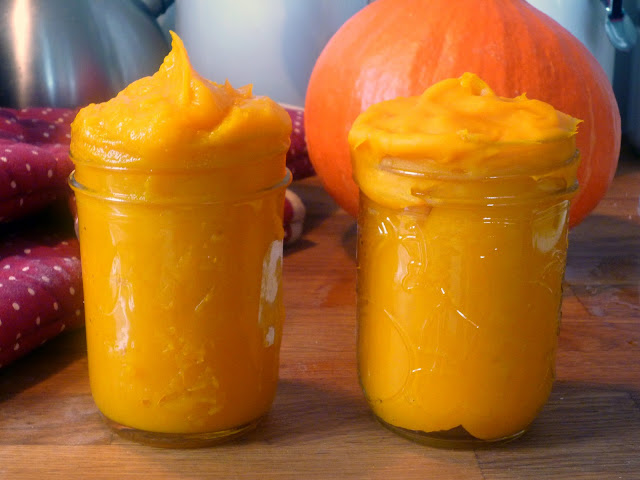 The pumpkin on the right was the Hokkaido and it is so rich and creamy and packed full of delicious pumpkin flavor. I seriously could not stop eating it when it was warm...sprinkle it with a little cinnamon and sugar and you might become addicted. I know I did.

So what do I do with all this pumpkin? Well, besides smearing it on toast topped with cinnamon cream cheese frosting, mixing it in with my oatmeal, making soup, and eating it straight from the jar, I also made some delicious little treats.

I give you, the Pumpkie. 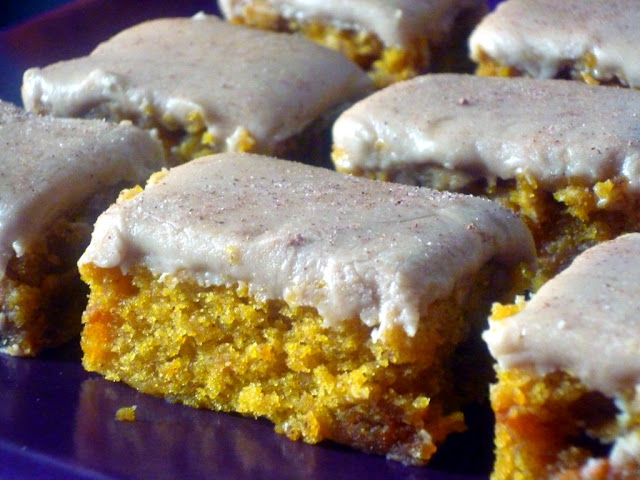 It's like a brownie, but with pumpkin instead of the chocolate. 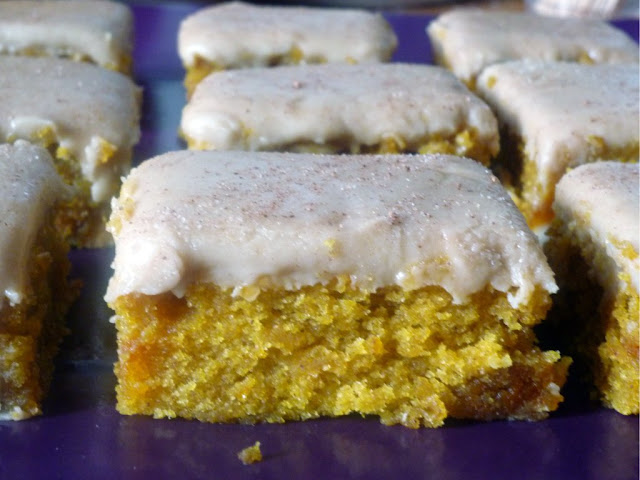 Top it off with a little caramel frosting and you have yourself a perfect, and easy, fall treat.

Preheat oven to 350〫F (175〫C). In a large bowl, beat butter until light and fluffy. Add in sugars, egg and pumpkin and mix well. Add in flour, spice and cinnamon and stir well. Fold in butterscotch chips, or whatever mix-in your heart desires.

Pour into a greased 8x8 pan and bake for 30-35 minutes, or until a toothpick inserted in the middle comes out clean. Let cool on wire rack.

Melt butter in a small saucepan. Add in brown sugar and cream. Cook over medium-low heat until the sugar is dissolved, about 2 minutes. Remove from heat and add in the vanilla.  Pour into a large bowl and beat in the powdered sugar until smooth. If it is too thick, add more cream, 1 tablespoon at a time.

When Pumpkies are completely cooled, frost, cut, and eat!
Posted by Cara at 8:57 PM

You're fun Cara! I would love to see your pumpkin-decorated home and eat Pumpkies with you and Luis! :x

I hate foolin' with a pumpkin.

Pureeing my own pumpkin seems daunting...can I use pumpkin in a can or is that cheating?

LOVE the recipe, definitely want to try it; looks like a comforting fall delight!

Kate, you can TOTALLY use a can! I just don't have access to one so I had to get creative. But if you have a can, use it proudly! :)