Your Day Could Be Worse

Oh hey there, long time no....write? Sorry about that one. I'm still here, I just have been trying to get all my pics sorted from my European adventures with Brit and, well, there just hasn't been an equivalent amount of time available to time needed to actually complete my next post.

I should get it up tomorrow, but until then, enjoy a laugh on these guys. 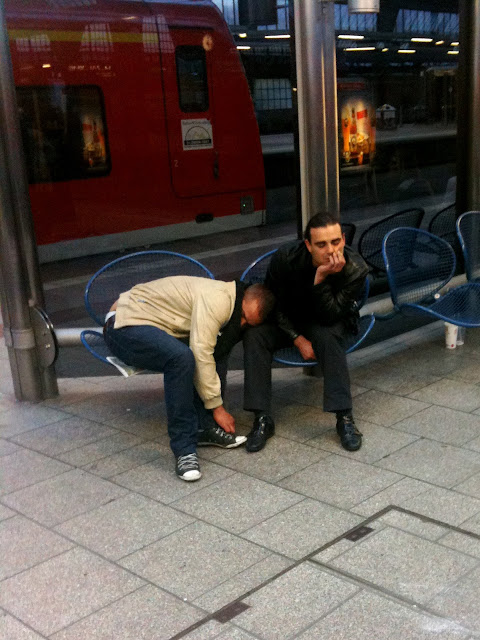 My last trip back to the States, I took an early train from here to the airport in Frankfurt. As Luis and I were walking in I was struck by the number of young people who were up so early. And as I began to wonder where they all were going so early in the morning, Luis turned to me and said:


"Isn't it crazy that these people haven't gone to bed yet?"

And then I remembered we were in Europe, where people stay out all night, and when you see them in the early hours at the train station, they are more than likely coming home rather than heading out.


And these guys were most definitely coming home. Or at least trying to get home. Luis started a trend of taking their picture because after he so slyly got up to stand in front of them, from a distance, looking like he was trying to make a phone call, others followed suit and snapped away.


Although they did it quite unashamedly, not even trying to hide the fact that they were taking a picture of the hungover guys in the station.


And there you have, just another little tidbit of the things we get to see over here. Hope your Tuesday is going better than those guys' night!