So I started this post yesterday and halfway through I was out like an old light bulb. Yes. I fell asleep blogging. I was a tired girl.

And by evidence of this post, you can probably guess that the wine won out. The gym got hit today, thanks to a little extra encouragement from my husband, who by the way, I am sometimes jealous of that he gets paid to work out. There are days where I could certainly use that kind of incentive and yesterday, and today, and pretty much this whole week were some of those days.

Lucky (or unlucky, if you're just totally uninterested in my ramblings, which you wouldn't be here if you weren't so disregard the whole unlucky thing) for you though, that means something to entertain you that last hour of work on this Friday afternoon. Don't worry, your secret's safe with me.

So Wednesday night (also a night I didn't go the gym, albeit for more legit reasons than last night) we went to our first Polterabend.

A what? Polterabend. It's a German wedding tradition in which wedding guests break porcelain in order to bring luck upon the couple's marriage. 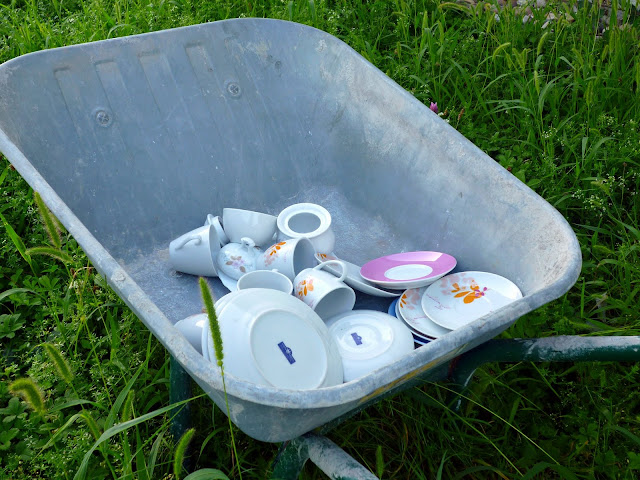 "The belief in the effectiveness is expressed by the old adage: "Shards bring luck" (German: Scherben bringen Glück). The expression is derived from a time when the word "shard" referred to the unbroken clay pots of pottery makers, and not just the broken pieces. It was said that a full jar was a lucky thing to have, therefore the expression "shards bring luck".

Well, Stephanie and Aaron will certainly have lots of luck by the looks of this pile. 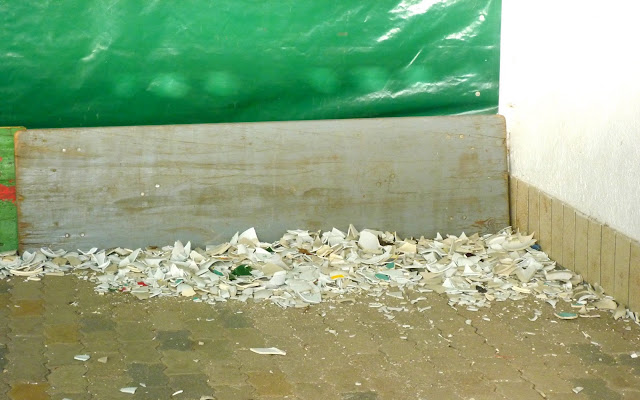 Traditionally, the event takes place in front of the bride's house, and guests come and throw porcelain dishes on the ground. The couple then has to work together to clean up the broken shards, which symbolizes their need to work together as a couple through difficult situations in life. 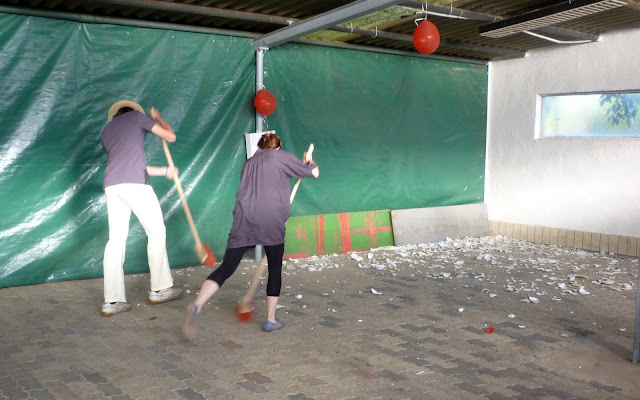 Just don't bring glass, which stands for happiness and should not be broken, or mirrors, which, we all know, when broken, means seven years of bad luck. 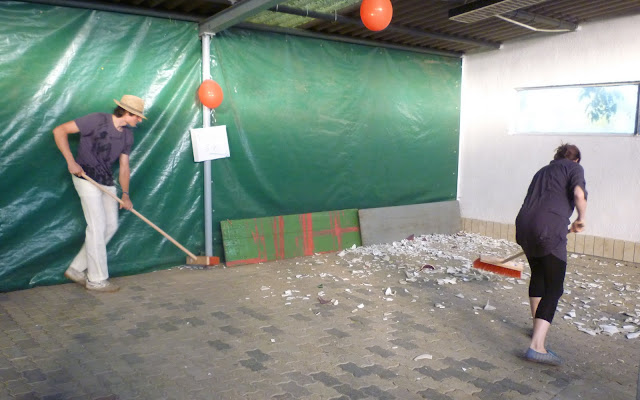 The Groom's Stepfather was a plumber, and had quite a bit of porcelain on hand. 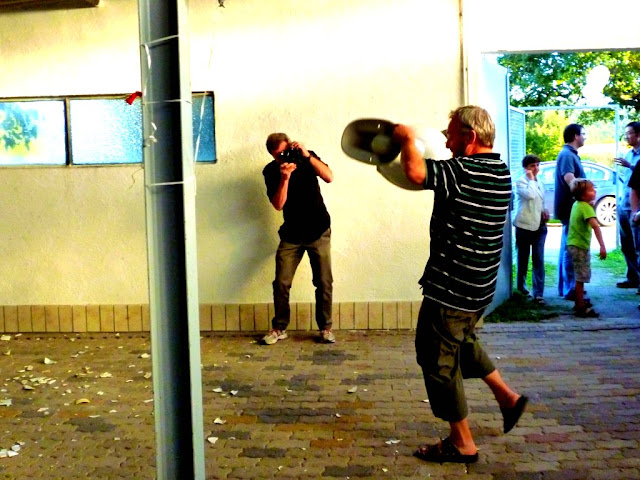 Yep, that's a toilet. And so is this. 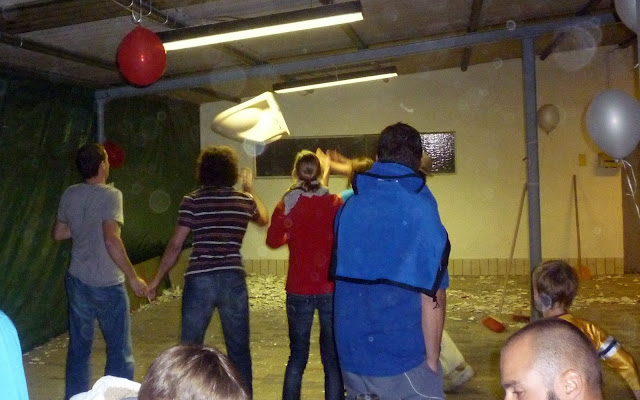 Excuse my lack of quality in all these photos. Quickness had to overcome quality on this particular night.

It was an interesting, fun, and loud, I mean really loud night. 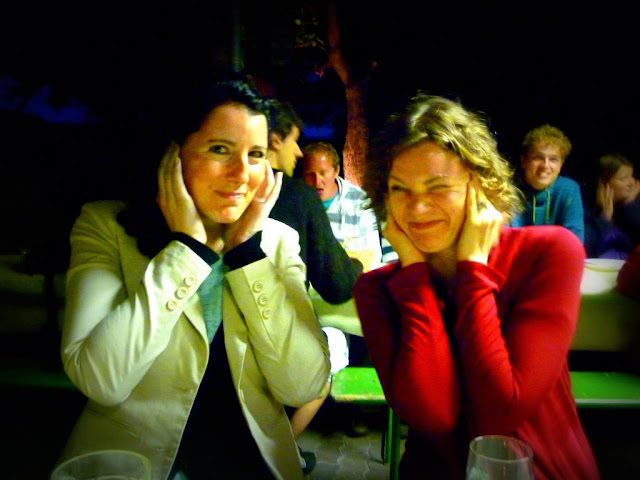 Shattered plates being smashed and swept up constantly makes for a not so pleasant sound and lots of "Huhs?" and "Whaddya says?" in conversations.

But the night wasn't just about broken plates. 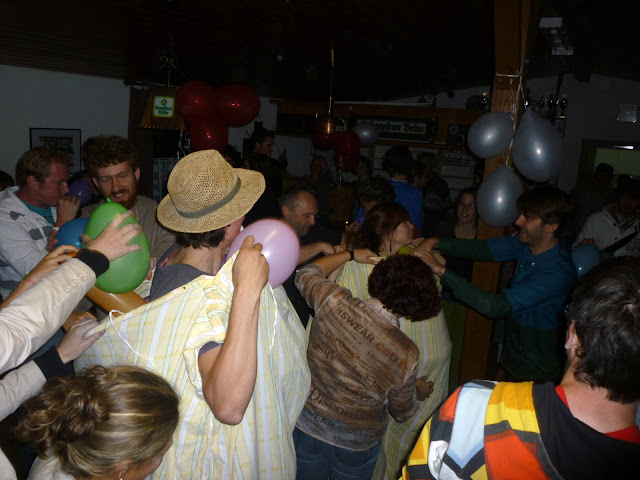 After a few hours, the group moved inside where we were given balloons. Lots of balloons. We then had to blow them up and stuff them in the couple's bed sheet suit things. 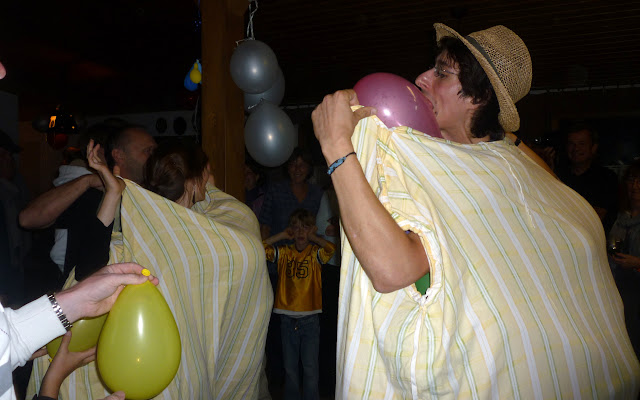 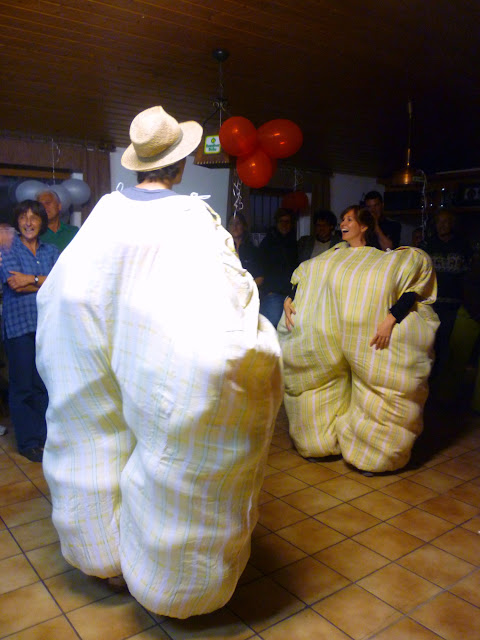 And then came the dancing. 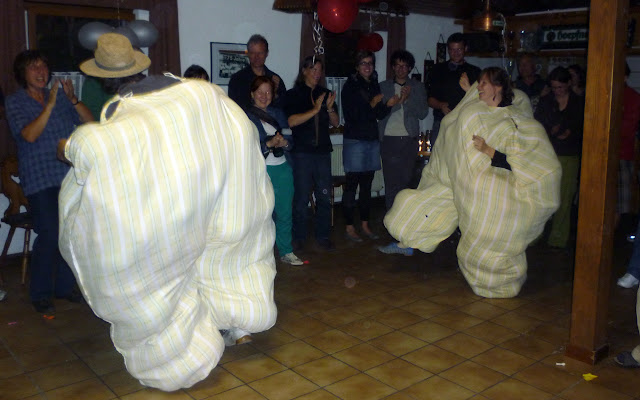 The couple danced to a variety of songs. Some fast. 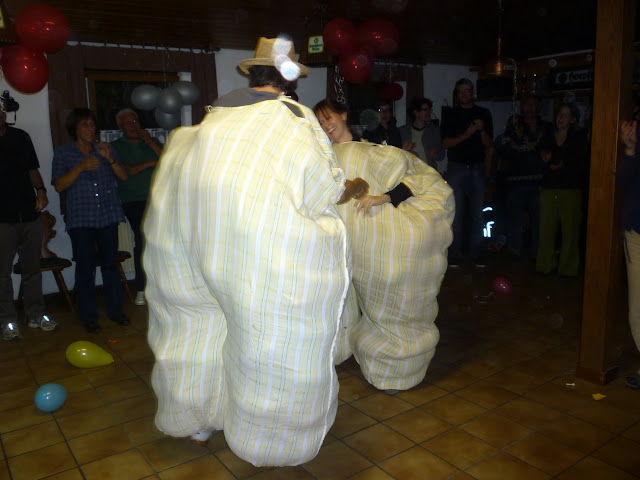 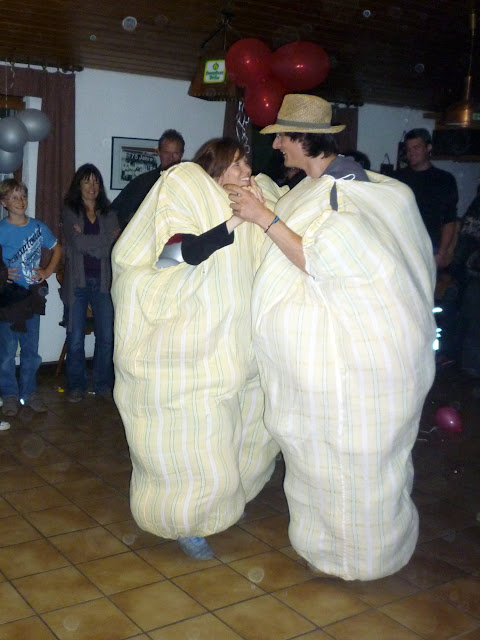 And while they were doing that we, the guests, were tasked with helping them get a little bit closer. (wink wink) 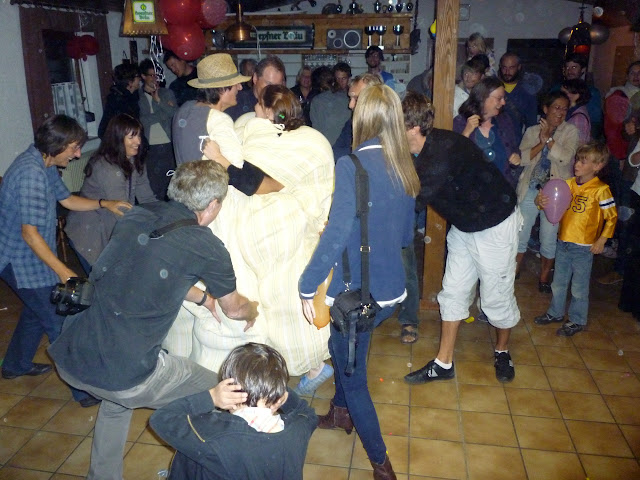 i.e We popped balloons. And it was loud too. Case in point: the little guy covering his ears at the bottom.

It even got a bit dangerous at one point. A little too much pushing and popping of the balloon couple. 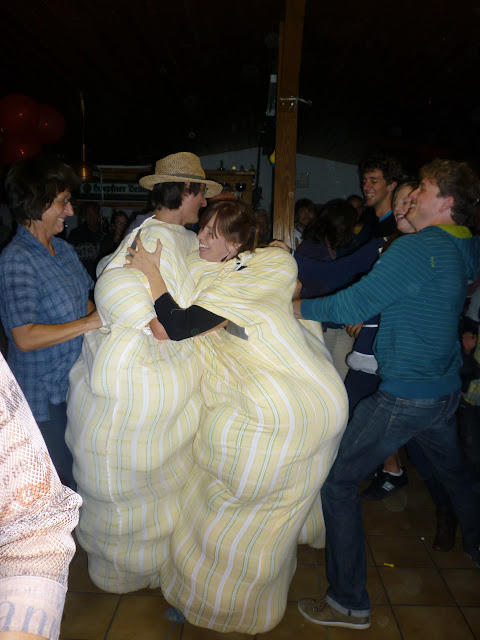 Only one kid ended up on the floor, and fortunately, there were no tears so fun was had by all. 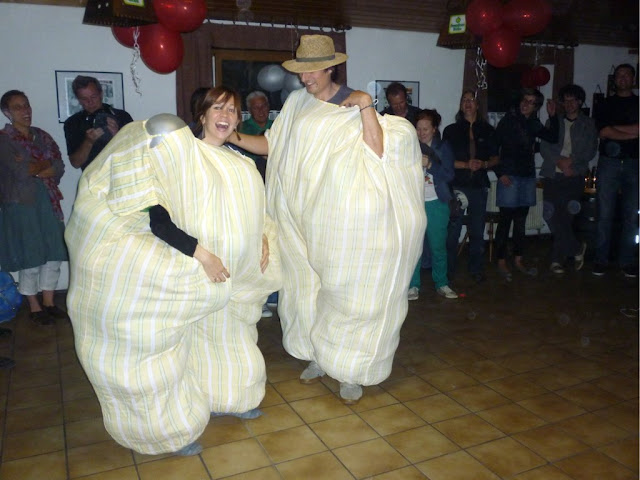 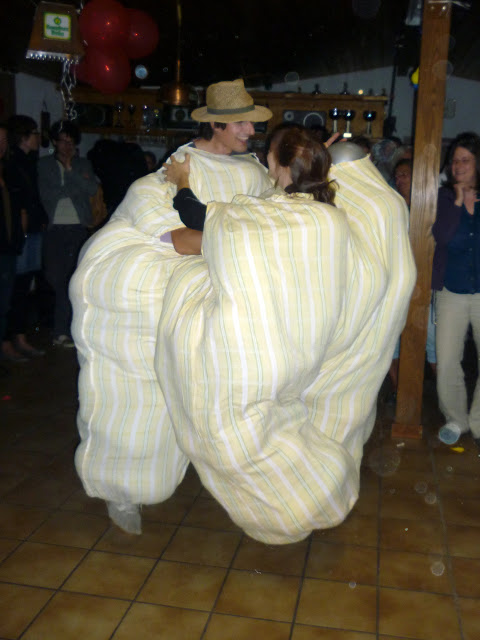 Balloon popping = Success. Just look how close they got. 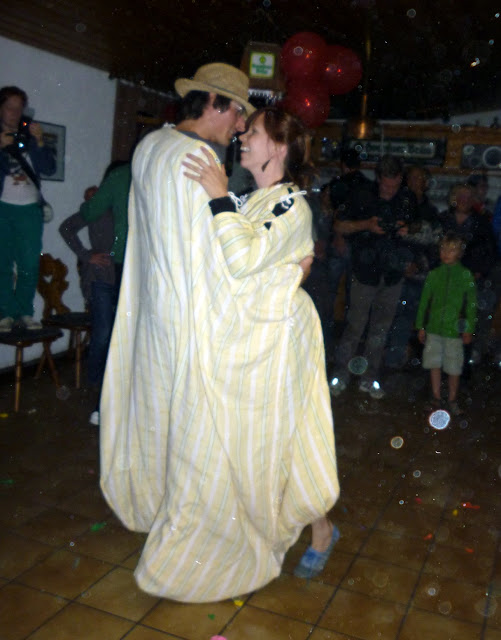 We had to leave early, but the festivities continued with the burning of the groom's pants.

According to Elaine (the girl plugging her ears on the left in the pic shown earlier), they carried Aaron (the groom) outside where his dad read a poem about this being the end of his bachelor years  and then they set his pants on fire and buried them.

Where do they come up with these things?

And there you have it, another, strange, but fun, German tradition. Happy Friday!
Posted by Cara at 9:42 PM

How fun; you crazy Germans really know how to live it up! I want to smash porcelain! Very Greek-ish! Love you and so happy you're having fun in Germany! Love you guys! Melly

Since we couldn't do this for your wedding I think we should do it for Riss when it is her turn, LOL

Germans are nuts, aren't they?

I see my niece with her ears covered. :)

Enjoying your blog -- I want to read them all...