You know how movies make you wait forever for the sequel? They keep you in suspense for a year, and usually longer, keeping you guessing whether there's going to be a part two or not. You're left waiting, hoping.
They let the anticipation build and build until you get so excited simply by the fact that there is indeed going to be a part two, that regardless of how terrible the preview looks, your $20 ticket and $10 popcorn are already purchased because, by golly, you have been waiting forever and a day for this sequel to come out and you are not going to miss it for anything!
Well, here you have it, the (week) long anticipated sequel to "Pirates, Beach Baths, and Speedos": "Pirates, Beach Baths, and Speedos...Part Zwei." Creative.  I know.
In the first movie post, I left you with a scarring Speedo cliffhanger.  My sincerest apologies. I promise today will not contain anything of a graphic or terrifying nature.  Cross my heart.
Today is nothing but the beautiful scenes of nature we breathed in along the way. 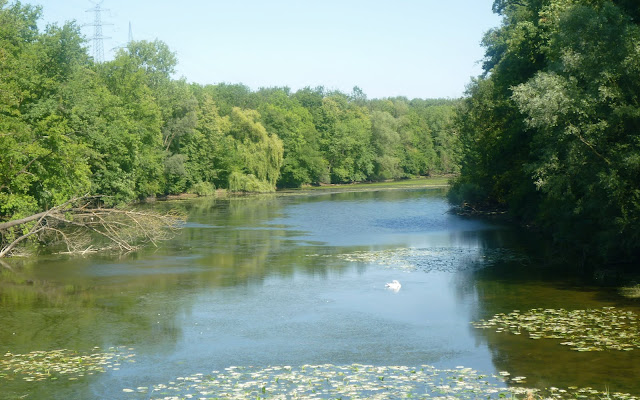 And the amazing practical and ingenious ideas of the Germans.


Wow! What an unexpected plot line. Nature and ingenious ideas of the Germans? You're riveted, I know.


After enjoying some beautiful paths through the forest and along the river, we came to the more industrialized part of the Rhein. 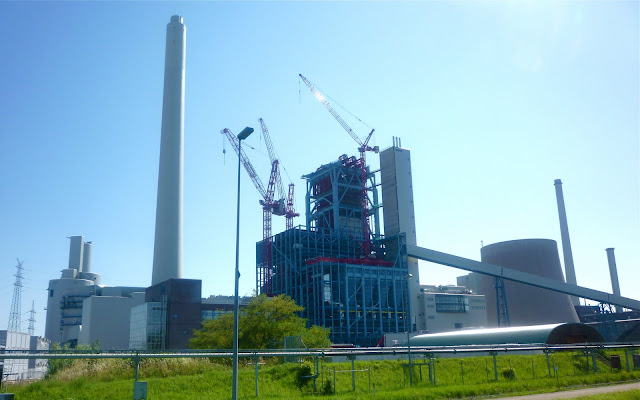 Not quite as serene but still not bad to look at. 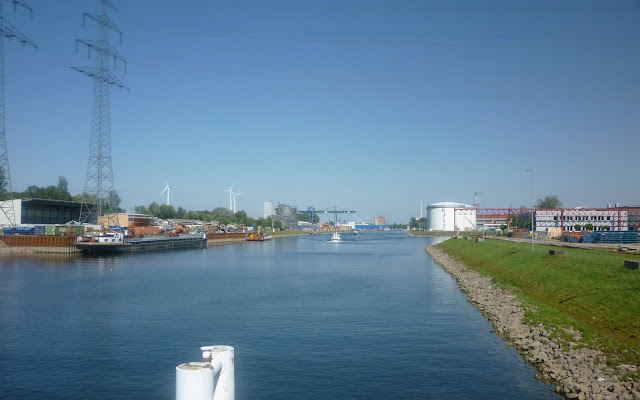 Only problem was we were stuck. 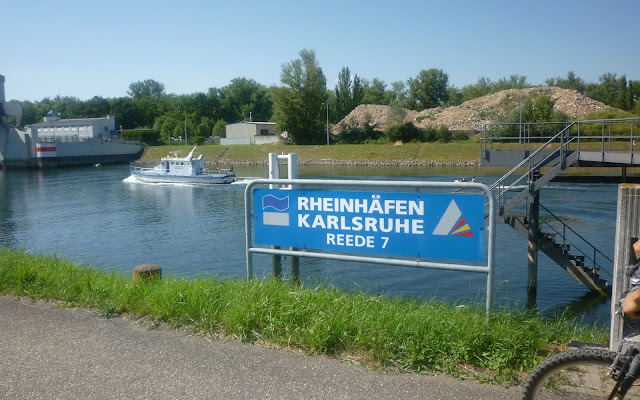 Seriously, is this not the best sequel of all time? Summer Blockbuster for sure.


While we were trying to figure out what to do, whether to, once again, retrace our trail as we had done on our run that left me hobbling and off the trails for the past month (read part one if you're just totally confused right now), we did a little exploring of the area. 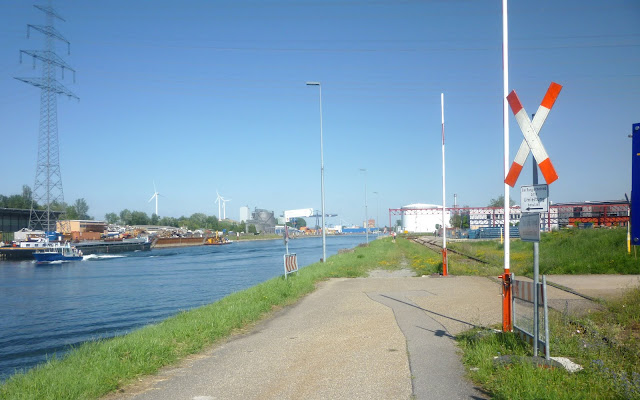 There wasn't a whole lot going on other than this seemingly useless structure that you could walk out onto over the water. 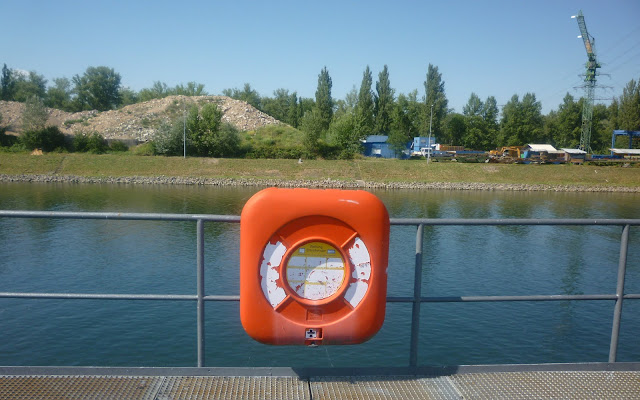 You could also walk down these stairs if you felt so inclined. 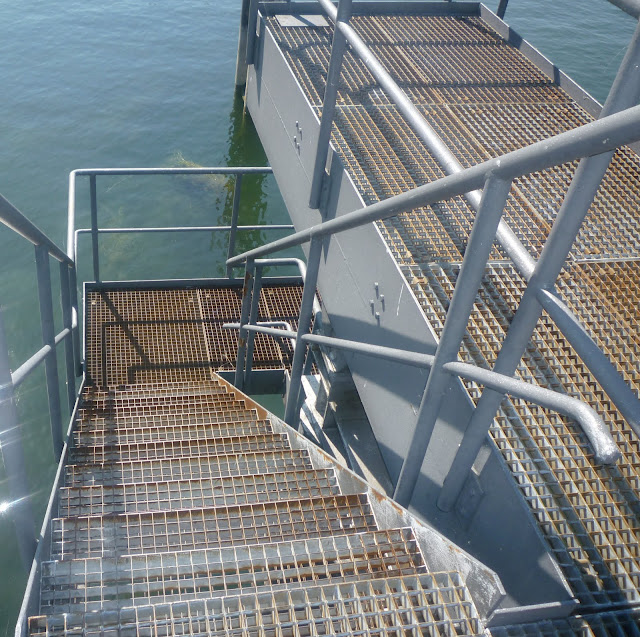 Which of course my husband did. And then he walked right off the stairs and into the water. 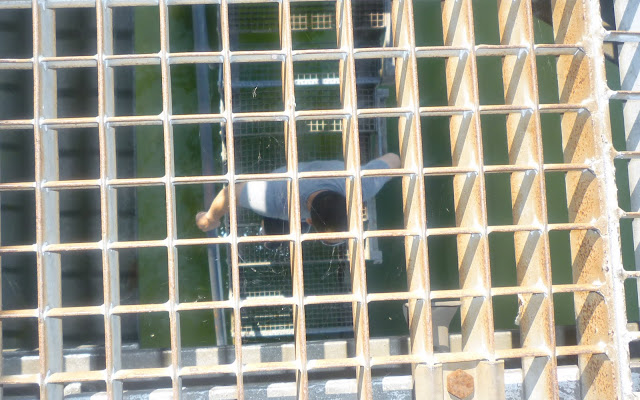 Not really.  But he could have because that was where the stairs took you. Straight into the water.


I'm really keeping you on the edge of your seats here, aren't I?


After wasting our time taking stairs to nowhere, we continued on our path towards this structure that just happens to be a bridge, and is not, contrary to my original thinking when I have approached this bridge from the other side, closed off to pedestrians. 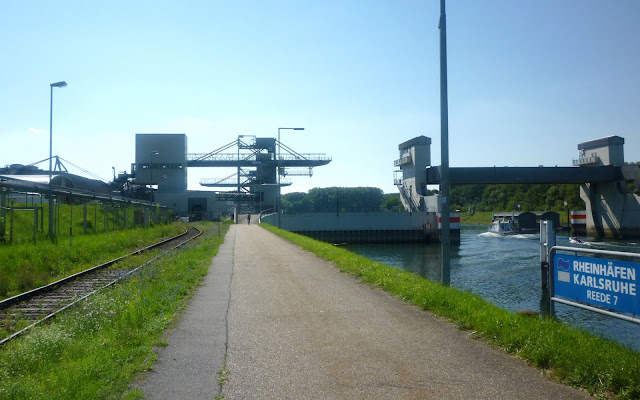 Or bikers for that matter. 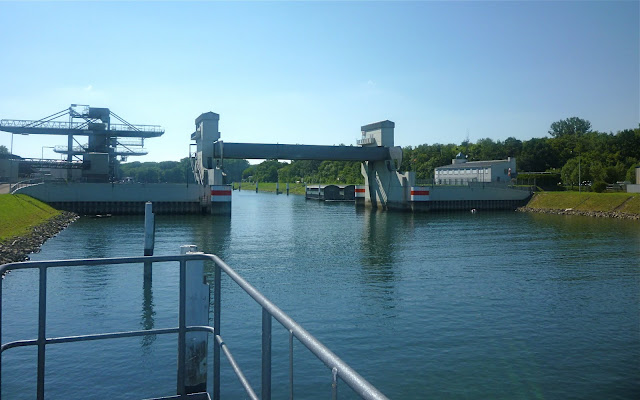 
Luis was ahead of me because I am slow and I get distracted taking pictures of uninteresting structures built over water. I saw him heading up the stairs of the bridge rather quickly with his bike. I figured he was getting his bike up to the top so he could come back down and carry mine up for me. He's a gentlemen like that.


But then he just kept on going, and I thought, "Hmmm, why is he not being so gentlemanly?" And then I realized that in fact, he did not have to be gentlemanly because I could easily get the bike up myself thanks to this cool little groove thing built in to make climbing the stairs with your bike super easy. 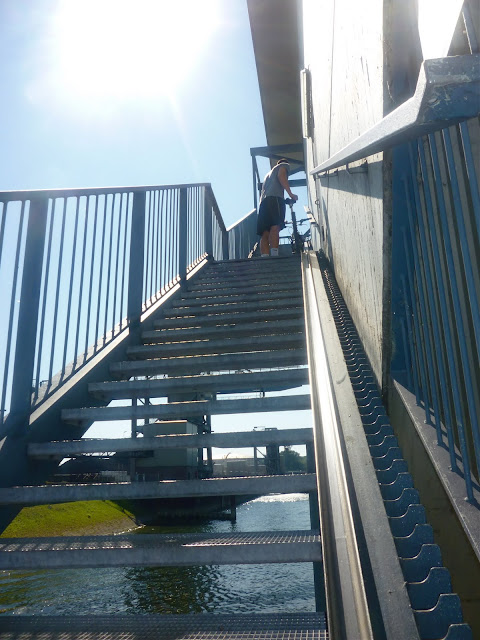 Okay, it wasn't super easy, I still needed some help.  But I think that was just me. I'm sure anyone else wouldn't have had any problem getting it up or down the little groove thing.


And in fact, no one did as there were other people going up and down with their bikes like it was nothing. Including Luis.


What is wrong with me??? I mean seriously, this is such an awesome idea, clearly it works for everyone else, so why couldn't I get my bike in the groove and just wheel it on up there? Silly weakling arms of mine. They can't do anything.


Regardless of my inability to use this ingenious bike groove thing, I still think it's cool. Totally practical. Totally German. Them Germans are very practical people.


That's why you'll find a lot of apartments with the washing machine in the kitchen. They can connect everything through one water source rather than running several lines through the apartment. It looks completely ridiculous, but hey, it's practical.


Ours is in the bathroom.  Also very common. Much less ridiculous. Still very practical. And while I would prefer not to have to look at it when I'm, er, managing my situation, I do like that I don't have to trek up and down the stairs to the basement every time to switch the clothes.


That's where our washing machine was in our last apartment, and let me tell you, I am much more efficient in getting laundry done when it's in the bathroom because I don't forget about it like I did in the basement. Did I mention that it's nice not having to haul everything up and down all the time?  Cause it's really nice not having to haul baskets of clothes up and down all the time.


Although, maybe if they installed some sort of laundry track, like the bike track, it wouldn't be such a bad deal. Hmmm, now that's an ingenious idea...
Posted by Cara at 3:07 PM