A couple of weeks ago, Luis and I went for a "short" run that ended with us getting lost after following a route that we thought looped around but in fact did not.  Actually, it did loop around, it just didn't make as short of a loop as we thought it would.
After 40 minutes (which was how long we intended to run in the first place) we decided we should turn around and go back the way we came which wouldn't have been so bad except that I haven't done a long run in quite some time considering I wasn't running as much through the winter, because, well, it was winter, and then I was pregnant so running was sloooow and short and not so frequent, and so it has only been in the past few weeks that I have begun extending my runs.
It also wouldn't have been so bad had my knee not begun to hurt just about the time that we were as far away from home as possible so we had to sort of do this run a bit, walk a bit thing going back followed by just walking, followed by hitching a ride with a man from France who happened to stop and ask us for directions to a little village just past ours.
All seemed great at this point until we suddenly had to jump out of his car. No worries, he was safe. Problem was our good Samaritan started to follow his GPS onto the highway rather than trusting our directions which would have taken us by our house and gotten him where he needed to go. Had we stayed in the car, we would have ended up even further from home than when we first got in the car with him.
We then decided that we would just push through it and run the last leg because we really weren't that far from home anymore.  It wouldn't take us more than 15 minutes. 20 tops.  At this point I was feeling bad that the whole reason we went on this run was for Luis' training and he was having to run super slow with me.
After telling him a million times to go ahead and run faster if he needed to, and him saying no, he wouldn't leave me, I pulled the "World Cup 2014" (our goal) card and off he went, a bit hesitantly at first but then gradually he began to go faster and faster and faster and just as he was out of earshot from me, my knee decided it didn't want to run anymore, and actually it didn't want to walk either.
And so I stood there awhile on a bridge, debating what to do, knowing I was so close to home and yet oh so far considering my current condition of going nowhere.  Turns out I have "Runner's Knee." Awesome.

That was all just a very looooong (probably unnecessary) introduction to the bike adventure we took on Sunday.
Sunday was a beautiful day so we decided to get the bikes out and follow the same route we took when we had our (not so) little run a few weeks ago.  We wanted to see just how long that loop around really was. 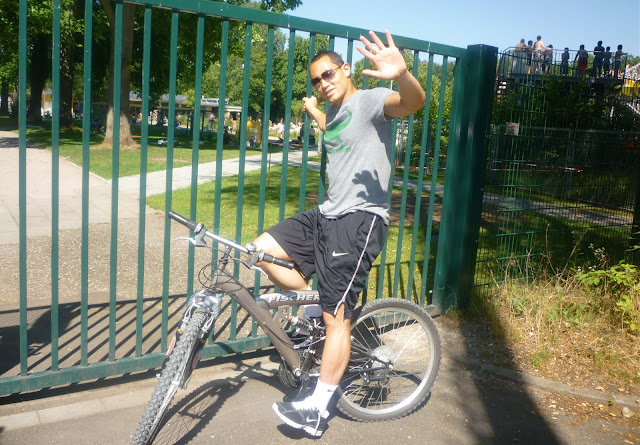 The loop is long.  An hour and half on a bike long.  Which means, had we run it, we would have been running for however long it would take us to run 20 miles.  We would have died. We also would have missed the wedding we had to go to that afternoon, which by the way I wasn't able to dance at because of my knee.  Dang that run.
Biking it was great though.  And along our ride, we made a discovery: Pirates of the Caribbean Rhein. 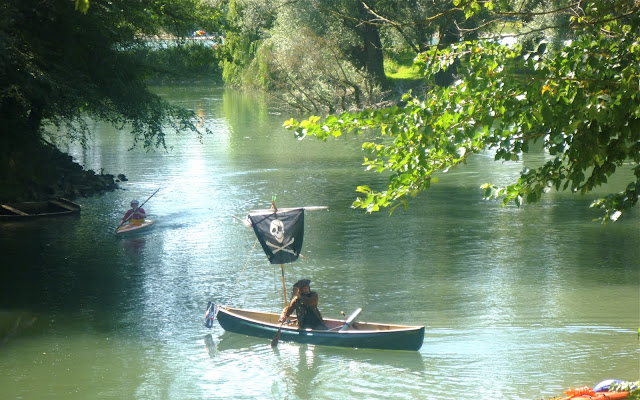 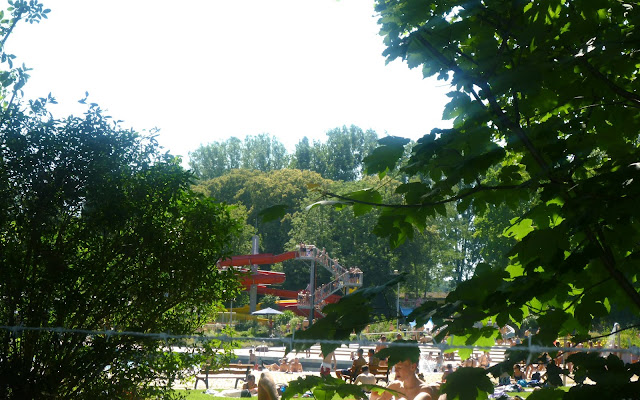 A very big pool. A very CROWDED pool.  With slides. 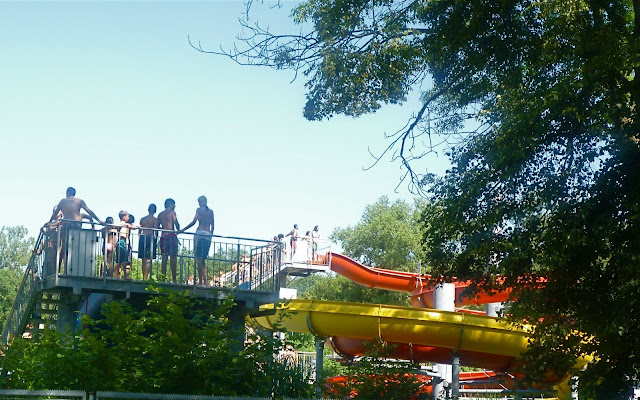 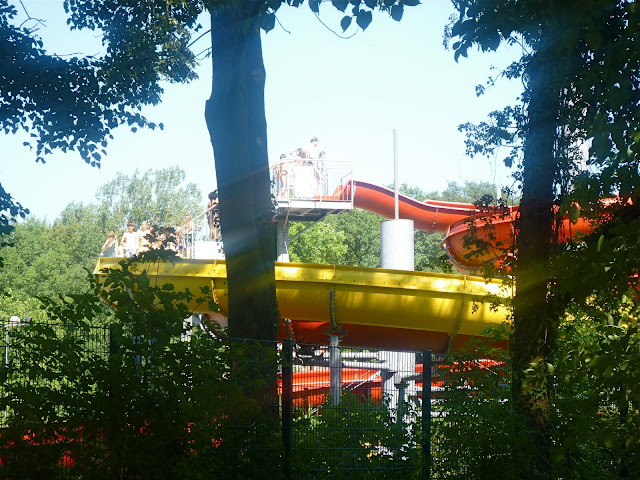 Surrounded by beautiful trees and situated right next to the Rhein River. Hence the name "Rhein Beach Bath" 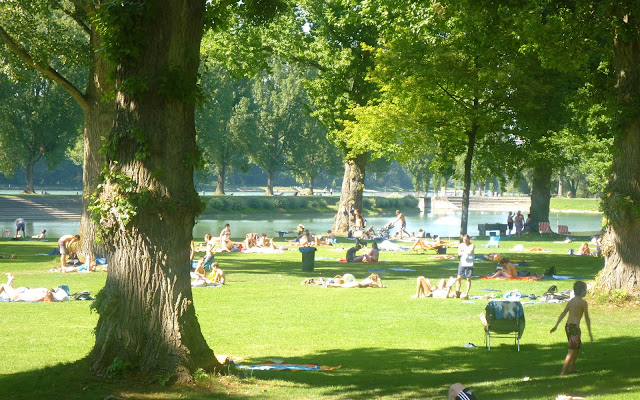 Swim in the pool on one side... 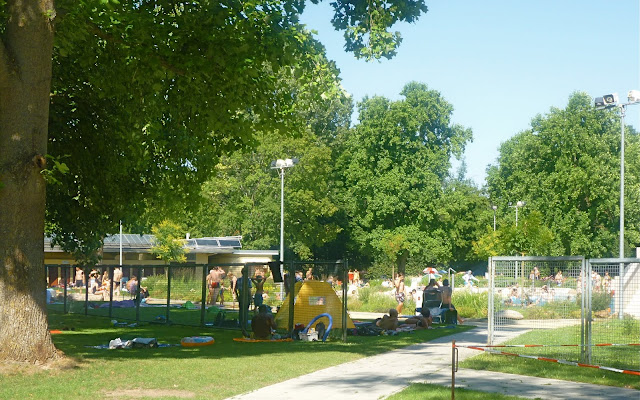 ...a hop, skip and a jump across this pretty little path... 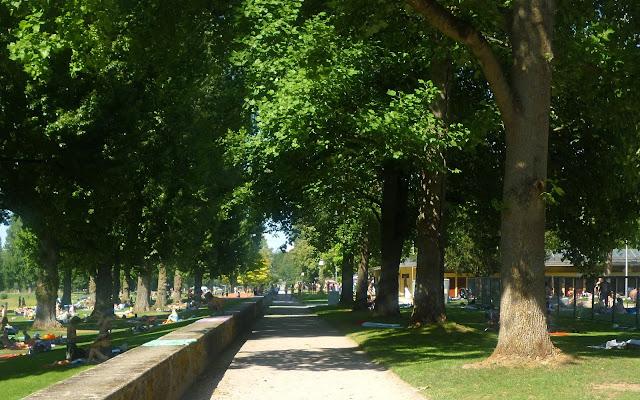 ...and you're laying/playing by the river on the other. 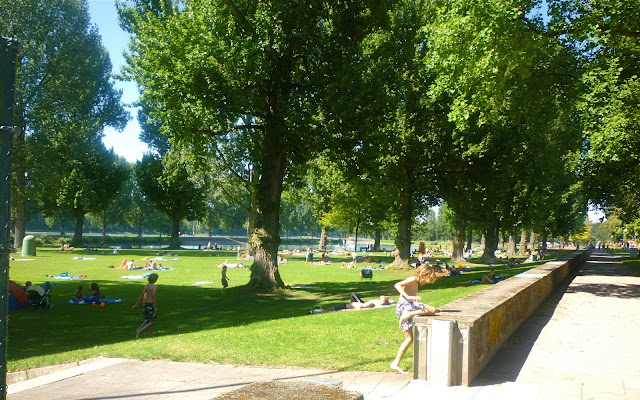 Pretty cool.  Now here's something that's not so cool. 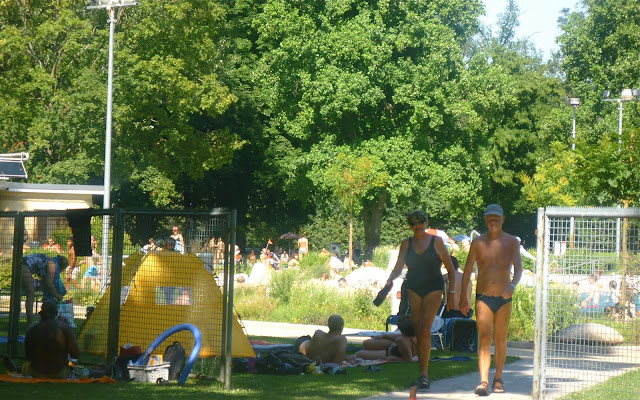 European men wear Speedos.  Correction: OLDER European men wear Speedos. Regardless of belly size or chest hairiness.
That was an accidental shot I took by the way. I promise I was not taking a picture of the old man in a Speedo. Although he and his lady friend seemed to think I was so  I made sure to make it VERY obvious as they were walking by that I was taking pictures of the pool. 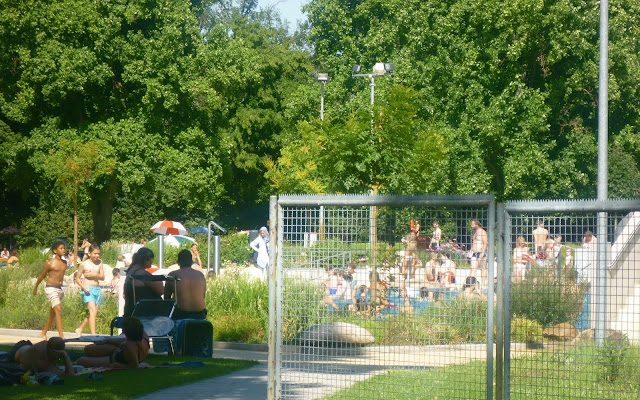 The pool people. The pool.  Yes, I know, I could have spared your eyes and deleted Old Man in the itty-bitty Speedo, but you want the full experience of our lives don't you?  And well, Speedos are, unfortunately, a common site for us in a German swimming area.
I'm sorry.  Really, truly I am. To make it up to you, I'll give you your time back and end this already much too long post.  For now at least. 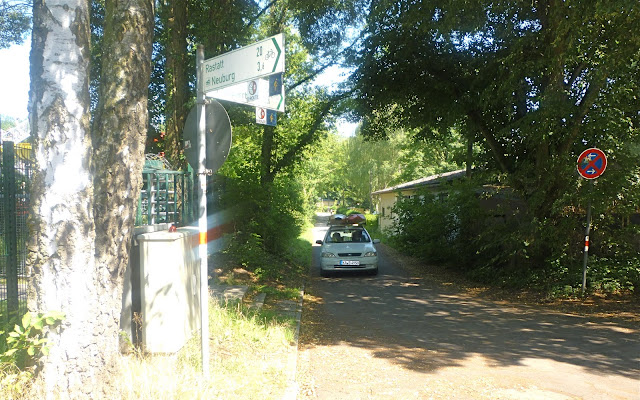 You can thank me later. Bike Adventure 2011 to be continued...

Thank you for making me laugh Cara. Love and miss you!