I had brunch with my friend Sabrina on Sunday.  Sabrina is an American as well.  An Arizonan even.  We're practically the same.  Oh except that she's a beautiful ballet dancer and I have no grace whatsoever.

So on Sunday, (which I swear was yesterday!  Just where did this week go?), Sabrina and I went to this cute little place called Pinkoko.  One thing you should know about brunch...if you can call it that...in Germany is that it's not at all like an American brunch.  There are no pancakes or waffles or greasy pieces of bacon and sausage patties. No omelettes or muffins or toast.

It's much healthier of course. And the limited selection makes it easy to order which I appreciate.  So just what is on a German Breakfast/Brunch menu?

You have your choice of a roll.  A whole grain roll (my fave).  Butter. Jelly.  Nutella.  Cold cuts.  Cheeses. Muessli. Fruit.  Ooorrrr Muessli with fruit.

They also have hard boiled eggs (which are sometimes actually soft boiled, so watch out. Yeah, they eat those here.  Ew.) Having never eaten a hard boiled egg in a restaurant, neither of us were quite sure what the proper "egg cracking" etiquette was. 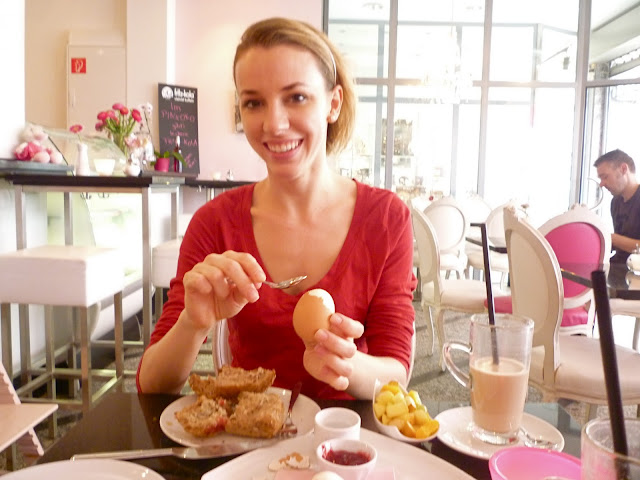 It's amazing how living in a foreign country can make you question even the most simple of things in attempts to "fit in" with the culture.  I mean, seriously, a special way to crack a hard boiled egg?


We decided  giving it a little tap with our baby spoons and then quickly removing all shells with our fingers and setting it back in it's little egg throne was acceptable.  We then proceeded to eat it out of the special little egg bowl with a spoon.  I can honestly say I have never eaten a hard boiled egg with a spoon.


Back in the old US of A we don't use no utensils to eat a hard boiled egg.  No sir.  We grab that egg with our bare hands and take a big ol' bite.  We're classy like that.

Also on the German brunch menu, croissants.  And sometimes, not always, but sometimes even scrambled eggs which gets me real excited because not only are they tasty, there is no confusion on the proper way to eat them.  Grab a fork and dig in!  Pinkoko didn't have scrambled eggs hence why we ordered the hard boiled version.


Pinkoko did have Chai. (Can you tell I like saying Pinkoko?) Which made me even more excited than scrambled eggs would have.  And they had awesome looking cake, which I didn't get a picture of because I didn't want to draw any more attention to ourselves after the whole egg giggling experience, and I didn't buy because Pinkoko also doesn't take bank cards which left us counting our coins to cover the bill.

This is a very important thing to know when you come to Germany: You are lucky to find a place that takes debit and/or credit cards (that's actually how we randomly met Sabrina, but that's a story for another day) so have cash on you AT ALL TIMES.  More than you think you need. Because then you aren't left counting coins and you can buy awesome looking cake if you so well please.


Also a thing to know about Germany, when you order regular ol' water, you know in it's natural state, the way God intended it to be, no fancy bubbles or anything, straight out the tap, they'll bring you a double shot.  Of water. 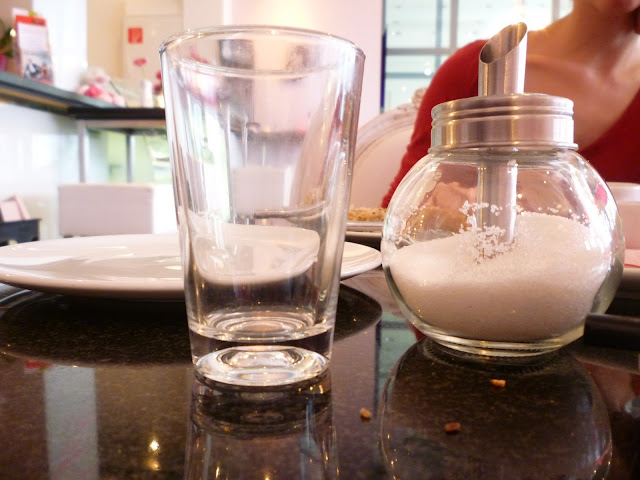 Sometimes, they will even charge you for it.  One time, I ordered tap water and it came in a "big glass"(which means it was the size of a quadruple shot...if there was such a thing).  I thought "How generous of this restaurant to give me such a "large" glass of water!"

That is of course until we got the bill and I saw that my two swig glass of water cost us 2.50.  Just a Euro less than the beer my man drank.

Fortunately, water at Pinkoko was free.  Even after 4 refills.  I was thirsty, what can I say? 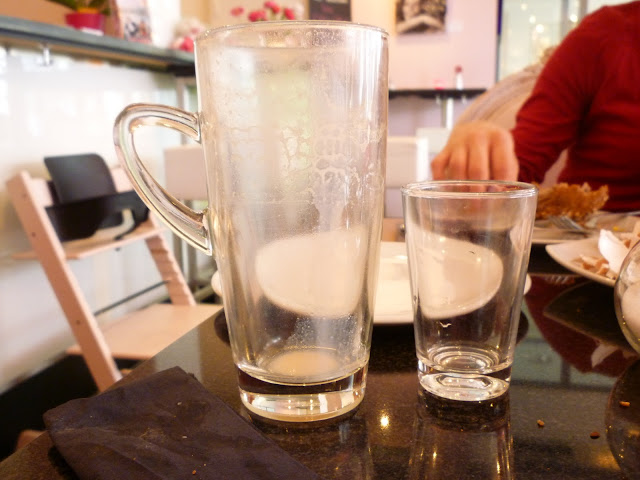 You think after the third refill she might have just taken my empty Chai glass and filled that with water.  Or maybe she liked the exercise.

Hard boiled eggs, shot glasses of water and all, brunch is still my favorite kind of meal. Even in Germany.  And Pinkoko is a great little place to enjoy it.  If you're in Karlsruhe of course.

Just like I hope your Friday will be.  The fun part of course.  Although a little girly spa day would be great too...Happy Friday everyone!
Posted by Cara at 11:24 AM

Pinkoko sounds soo cute! (and it is fun to say)

we had the same egge experience when we first got here too...im still not good at taking the shell off without it coming apart into a thousand little pieces

Ah yes, the german hard boiled egg experience! I don't like them, so I've never deigned to master the art of eating them, but after living here all these years I HAVE watched a few being eaten--top of the shell is peeled off, after being politely sideways whacked with the table knife, and get this, they scoop out the white and yolk of the egg, leaving it in the shell, IN the cute little egg cup (which in my mind is the only fun thing about the whole experience!) And yeah--watch out for those gooey yokes! Hugs, from Lucienne

Oh goodness, your breakfast experience looks like quite the adventure (and delicious, too)! I must admit, I have a little bit of envy of your experiences abroad.

You make everything interesting in the way you write! Thank you for letting us see Sabrina!

As always, I just love to read your blog, it makes me feel that I am there beside you enjoying the experience you are having. I wish
I was really there.
Keep sending the blogs.
Aunt Geri