Friday night we were sitting on the couch after dinner when the following took place.


Luis: "You know what sounds really good?"
Me: "What?"
Luis: "Indian Fry Bread"
Me: "Indian Fry Bread?  Random."
Luis: "Can you make it?  Is it hard?  You can make those sorts of things right? Can you do your thing and make it?"

Before I committed to unknown amounts of labor, I decided to first look up a recipe.  Seeing that the ingredients were simple enough, I thought, "What the heck? Why not!"  To which my husband says, "Yep, TF!"
TF?  Let me back up.  This week I made chocolate chip cookies and in attempts to get them out of the house and not on my hips I sent them with Luis to training.
Apparently they were a hit.  One of the guys commented "Hey your wife can bake huh?"  To which my husband replied "Yeah, she can bake, she can cook and she can clean really well."  His teammates response? "Traumfrau."
Really?  Cleaning?  Cooking I get, but cleaning?  I didn't think men cared about that sort of thing so much.  Apparently, I was wrong.
And so, upon my husband's request, I made Indian Fry Bread on Friday. At 9:00 at night. 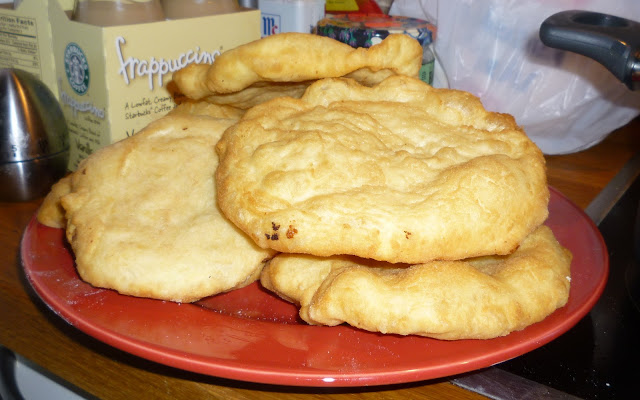 And I wonder why it has been increasingly difficult to stay thin since getting married.  Especially to a man who has the luxury of eating pretty much anything his tummy desires because he works out for a living.  Totally unfair. 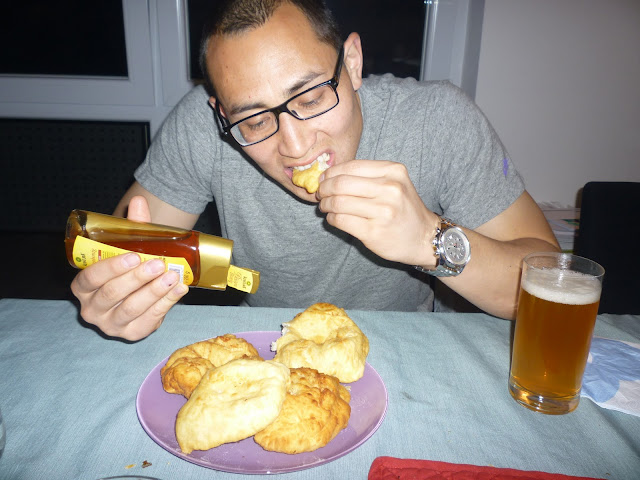 We whipped up another batch on Saturday night, because, well, his craving was not yet satisfied and there wasn't a crumb left from Friday night's batch.  Yep. He ate 'em all minus a few little  "tax" bites from the TF.  :) 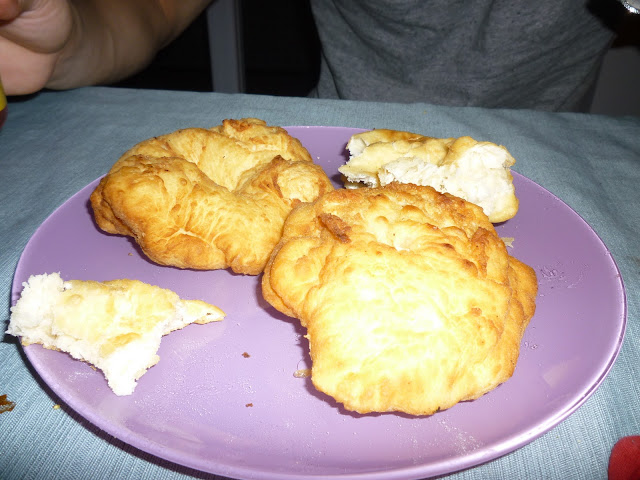 So just how does one go about making Indian Fry Bread? It's quite simple actually.  You take a little flour.  A little baking soda.  A little salt.  A little water.  And mix it all together in a big blob of ooey gooey dough.
Then you have to let it chill for a bit.  Anywhere from 10 minutes to an hour depending on your patience level.  Ours was somewhere around the 20 minute mark.
Next, pull of pieces of dough and form them into little balls, just a tad smaller than a baseball.  The first night I made them the size of baseballs and they were a bit large.  The second night I made them smaller which worked much better.
Cover dough ball in flour to make it easier to work with.  Roll out the dough to 1/4 inch thickness on a floured surface. 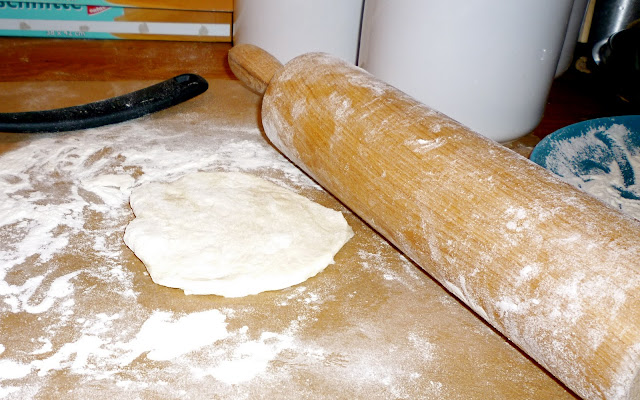 Thinner is better I found.  Because then they won't puff up so much when you do this (look away if you are offended by pots of oil and fried food). 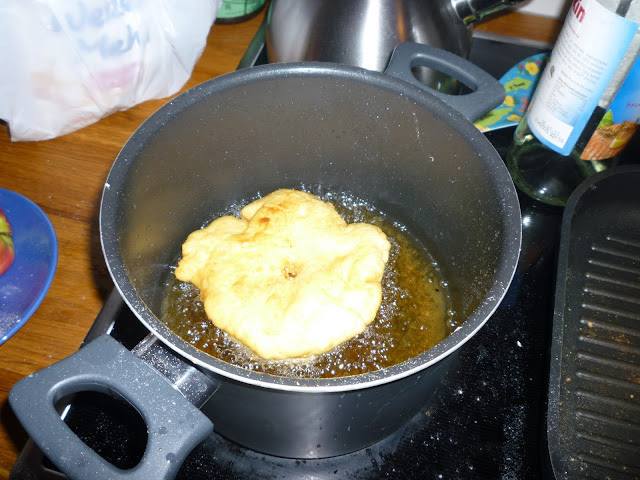 The hole in the middle was a suggestion from the recipe to keep them from puffing up too much.  But, as I mentioned above, I found it better to just roll them a little thinner rather than cut the hole.
Here is the "hole" method from the first batch. 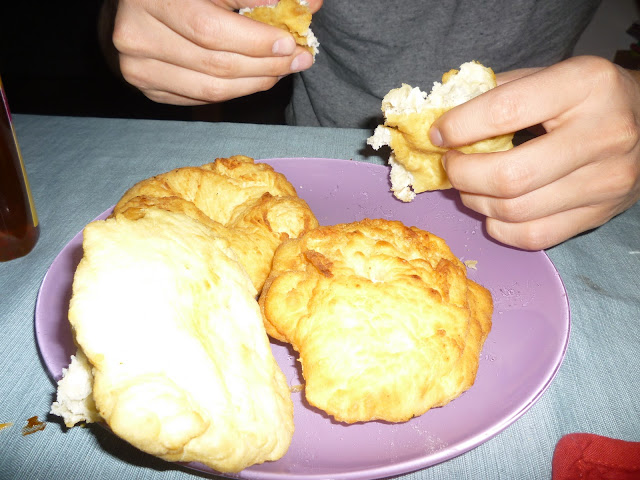 They were rather puffy and a little homely looking.  Here is the "just roll it thinner" method from the second batch. 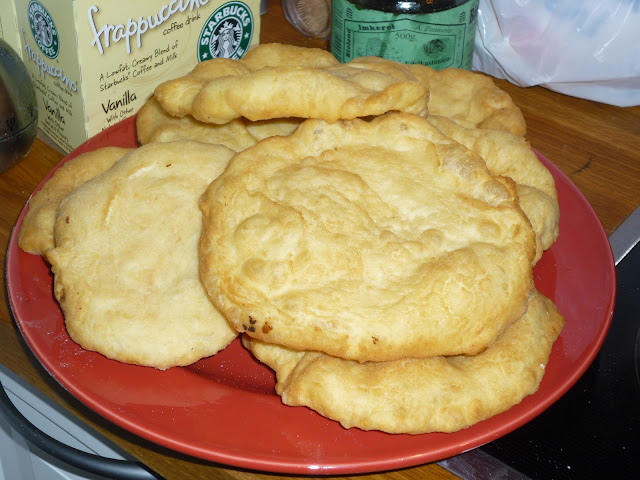 
I also tried grilling a few pieces.  Sorry, I nibbled before I photographed.  I just couldn't wait. 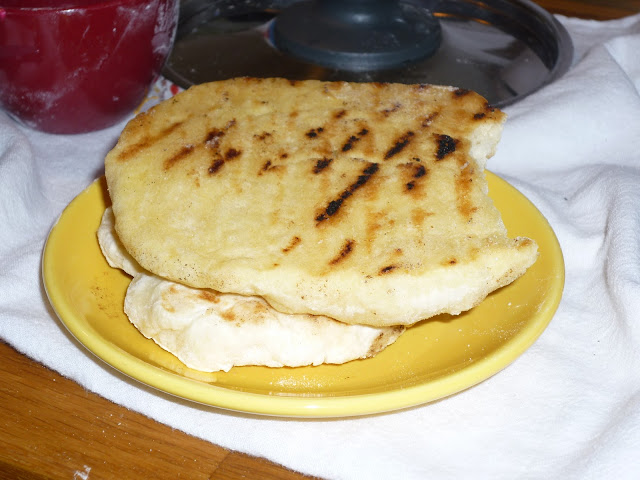 This was really yummy.  Very simple flavor, but with a little butter, you may just find yourself eating the whole batch.


Before I give you the recipe, I just want to share a few lessons learned throughout my Indian Fry Bread adventure. 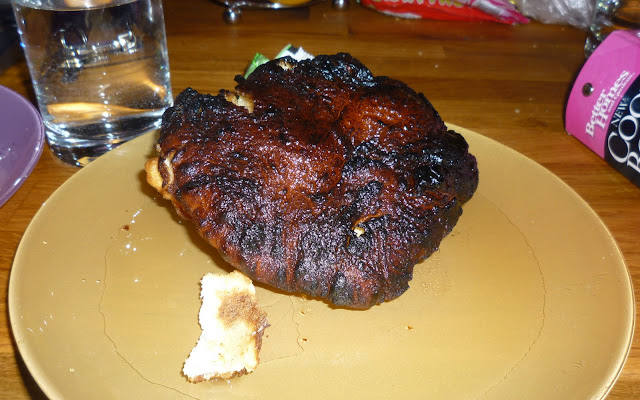 That was my first attempt at frying a piece.  Actually, at frying anything ever in my whole life.  I can honestly say, until this experience, I have never deep fried anything.  And by the photo above it definitely shows.
With some more practice, a bit of encouragement from my sweet man and a little turn of the temperature dial, I was able to produce something a little more edible than this thing right here. 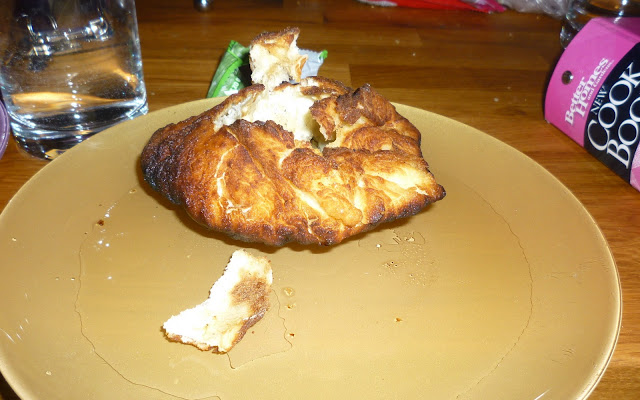 2. Measuring spoons can be hiding behind large frying pots and may not be discovered until all frying is done, the pot is removed and said spoon is melted to your stove top. 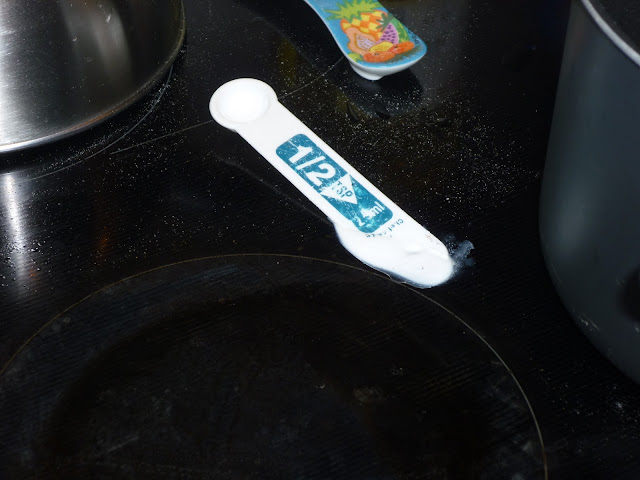 Oops!
3. My guy really likes Indian Fry Bread.  It puts a smile on his face. 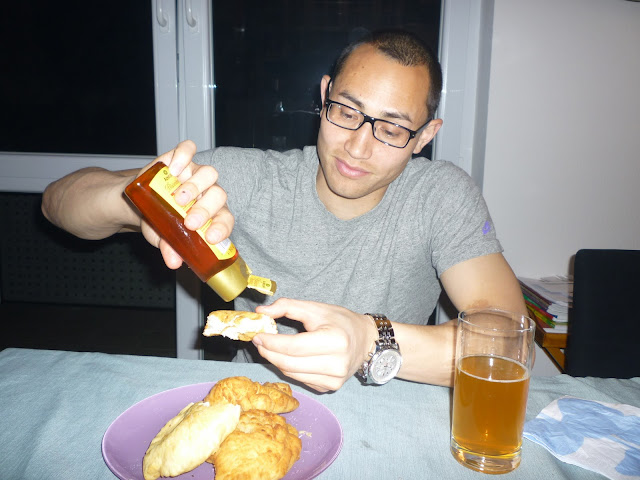 Luis learned a lesson in this all as well.
Luis' Lesson: Indian Fry Bread washed down with a Radler Weizen (1/2 Beer, 1/2 Sprite) is not a good combo.

Alright, down to business. Here's the recipe.


Combine flour, baking powder, salt and sugar in a bowl.  Create a well in the middle of the flour and pour in warm water.  Mix with wooden spoon or knead with your hands until thoroughly combined.  Cover bowl with dry kitchen towel and let set in fridge for at least 10 minutes and up to an hour.


Tear off baseball-sized dough balls (coat in flour to make it easier to work with) and roll into a smooth ball.  Next, roll dough out on a floured surface to 1/4 inch thickness. Place flattened dough in oil and fry for 1-2 minutes, or until golden.  Using tongs, flip dough over and cook the other side.  Once both sides or golden, remove from pan and let cool on a plate.  Repeat with remaining dough.


Serve with honey, cinnamon and sugar, powdered sugar, nutella or whatever sweet topping you wish!


If you want to grill a few, heat a grill pan over medium-high heat.  For a butter flavor, add a little butter to pan, otherwise leave dry.  Grill for 1-2 minutes and flip to the other side, cooking until dough is no longer gooey inside.

Oh my goodness Cara! Now I am craving Indian Fry Bread!! AH! That look so tasty!!!

Before reading this I would not have attempted Indian fry bread in a million years. Now I think I might!
So, what exactly is a traumfrau?