We're Not Certified, but We Got Gas

Luis's coach gave the team the day off to mourn.  Or he just didn't want to see them today after losing yet again yesterday.  While I think they should probably be training 24/7 until, oh, the end of time, I am not about to complain about a free day with my man.


Since the snow ruined my birthday plans to be a princess in a castle last Monday, we thought we might try it again after seeing blue skies and sunshine when we woke up this morning.


Upon further weather investigation, however, we decided, sun or no sun, a high of 1〫C (33.8〫F for my fellow Americans) is rather cold much too cold, to be hiking to a castle.  For today, this is all we will be seeing of the Hohenzollern Castle. 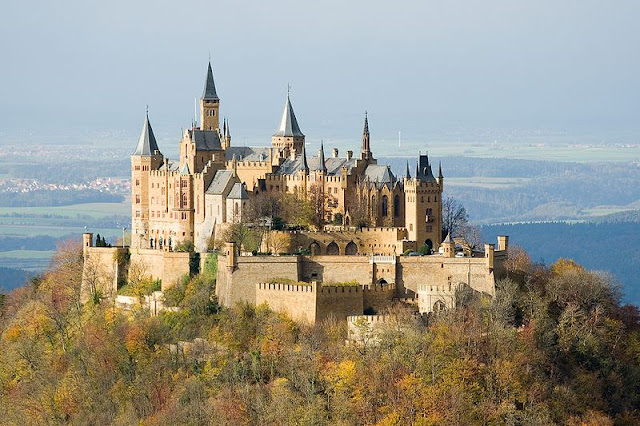 We started to think of indoor activities that we could engage in that didn't involve watching movies or staying at home.  We remembered seeing an indoor rock climbing gym and thought it would be cool to check it out.


When we got there though, we were informed that we would have to take a 2 hour class before we could climb.  The class is on Saturdays, which of course, doesn't work for us because Saturdays are a "work day" for Luis.  So we scrapped rock climbing for the day until we can meet someone who knows what they're doing and can go with us on a day that Luis is free.


Next we thought we might try boxing.  Yep, full on put on the gloves, punch the bag boxing.  Random, I know, but when we were driving through our village the other day we noticed a boxing ring and thought it might be fun to check it out.


But, like the rock climbing, we had to participate in a training course before we could actually use the punching bags.  We gave up on that idea for the day as well.


Germans are all about qualification courses.  Last year, when I was learning to golf, I wasn't allowed on the course until I earned my "Platzreife" which basically proves I won't go out there and kill anyone.  Or, a more likely reason for it, to prove I won't slow anyone down too much by taking an excessive number of strokes to get to the hole.


After striking out with rock climbing and boxing we got gas. 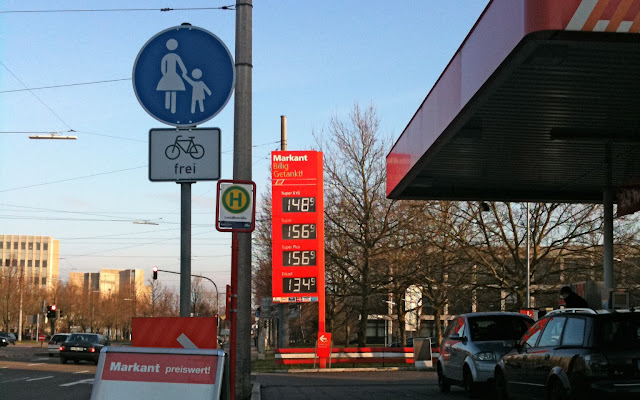 Twice actually.  We went bowling too, which is always fun and you don't need a certification course to do it, but it was the gas that turned out to be the most time consuming (and expensive) activity of our day.


The first station we went to, we filled up for 2€.  Why so cheap?  They ran out of diesel (most cars in Europe are diesel) as soon as we started pumping.  It was chaos.  Cars were driving off without paying.  I guess they figure there's a minimum amount of gas that has to be pumped before you're required to pay.


The ladies inside don't think that of course and were freaking out.  They do not like when you leave the tank.  I learned that the hard way.  Then you add the additional stress of working at a gas station without gas and the fact that Germans get all up in arms anytime something isn't exactly as it should be and you can imagine the chaos.


After paying our 2€ for our liter and then some of diesel, we headed to a nearby station where the line stretched onto the street, blocking traffic. 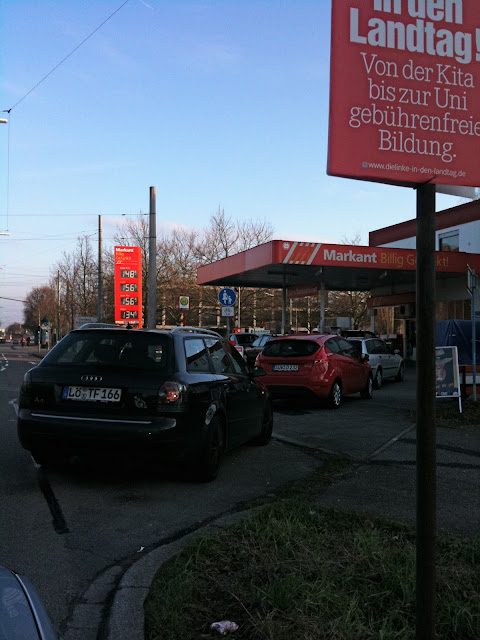 Why the sudden rush on gas?  First of all, it's Monday, and gas is cheapest here on Monday. Everyone, us included, runs on fumes through the weekend so they can fill up at the Monday prices.


Second of all, gas prices are sky rocketing and they are supposed to hit a high this week so everyone is frantically trying to keep their tanks full before they spike.

Lately diesel prices have been anywhere from 1.24€ and 1.31€ (per liter) so even our 1.34€ is a bit higher than the average.  And that's just for the plain ol' regular diesel.  If you want super, you're going to be filling up at a super high price. 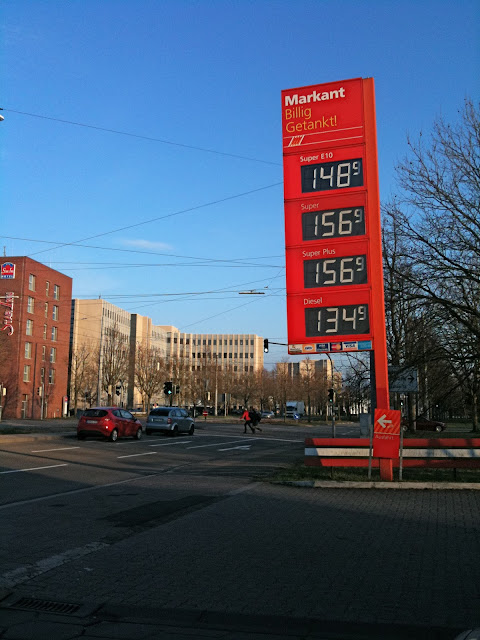 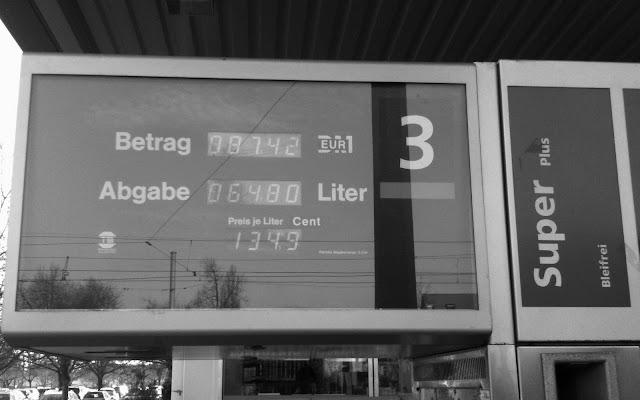 I don't even want to think about what we will pay if prices go up even more. 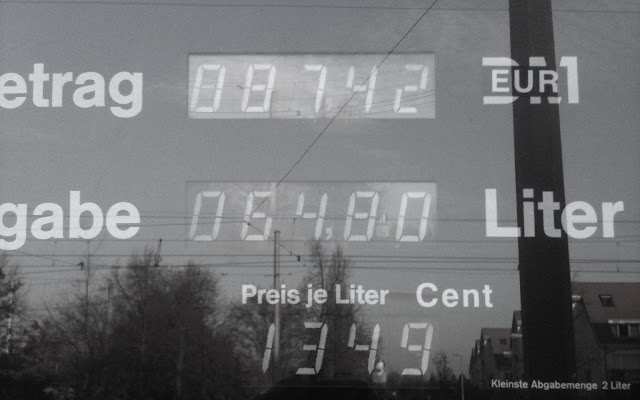 When Luis went inside to pay at the second station, the cashier told him they too were almost out of diesel and they're truck wasn't coming for another 4 hours.


Seriously, how does a gas station run out of gas, let alone two gas stations? I have never heard of anything like this happening before.


As we drove back home we passed the first station we went to.  You remember, the one that ran out of gas.


Word spreads fast apparently cause it's not so full anymore. 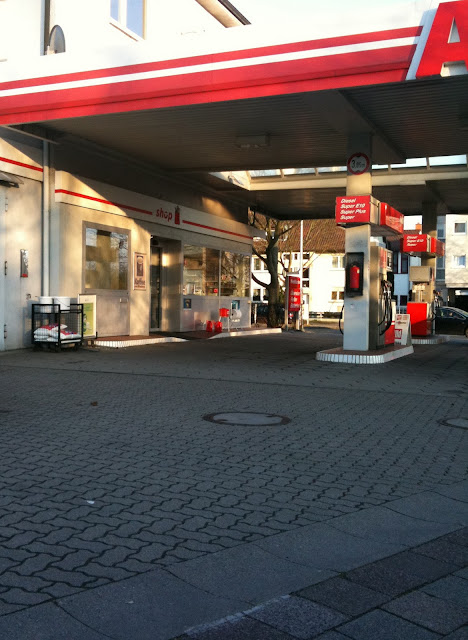 From now on I think we will not only fill up on Monday, when the price drops, but we will do so in the morning before they run out of diesel and we are left with an empty tank.


And the next time we have some spontaneous idea to do anything here, whether it be rock climbing, boxing, golfing, shopping, eating, breathing we will make sure we plan a week ahead to get whatever certification we need in order to do said activity.

I'd be so happy if my car was a Diesel :o( But it's not. And I don't want to know what I have to pay next time I need gas. I have to buy Super plus now because of this E10...It'll be horrible I know...

Did you get my reply on Facebook? I wrote it on my cellphone and it didn't work right.

I have to fill up the Echo this week. I predict that I will still be able to do it for under $30.00 and I will not complain about rising gas prices when I reflect on this post. Love M.

I love the new design!! It looks great! :)
Germany may have beautiful castles and tasty bread but their gas situation is ridonc!