I'm a fish and chicken kind of girl.  And turkey too.  Pigs and cows are not my thing.


It's not that I don't like pork or beef.  I will gladly eat them.  It's just that, if I have my choice of protein, you can guarantee to see either a chicken or a fish on my plate.


I can probably count on one hand the number of times I have ordered anything other than my standard protein go-to's.  Okay, maybe two hands. I went through this strange rib stage in middle school when I discovered how incredible they were.


That's because there aren't any.  I have never cooked anything from a cow or a pig.  That is, until I got married. And even then, it wasn't until last month, a year-and-half into our wedded bliss, that I actually attempted such meat cooking endeavors.


I have no idea what inspired my culinary curiosity to the red side (okay pig's not red but "the other white meat side" just isn't the same) but I think part of it had to do with this little beauty of mine. 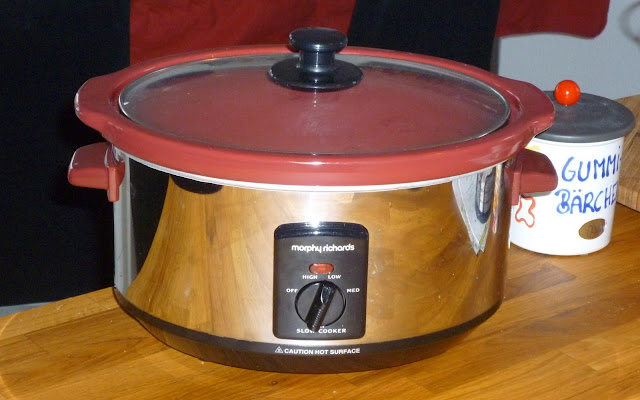 Yep, that's a crock pot.  A surprisingly difficult thing to find in Germany.

I had a really nice crock pot in the states that my sweet Grandma gave to me.  (Hi sweet Grandma!)  But when I was getting ready to move over here, I gave it away, because
I was very wrong about that second one, but thanks to my awesome parents and their discovery of Amazon.de I now am a proud 220 volt crock pot owner.

The first thing I decided to make was barbecued pulled pork sandwiches.  The only problem was, not only do I already have a very limited knowledge of meat and cuts of meat in general, but I now have to figure out what it all is in German.

When I went to the store, I realized I had no idea what type of meat to buy.  Pork, obviously, but what part of the pig?  And since Germans most certainly don't make barbecued pulled pork sandwiches, I couldn't just ask the butcher what to use.

After a little googling on my phone I learned that pulled pork sandwiches are made from the shoulder of the pig.  So, looking through the little signs in the meat case, I searched till I found "Schweineschulter" and asked for a kilo.  They were out.

Sure, that seems logical. Rindershulter it is.  I was a little nervous how it would turn out, but they ended up being really yummy, giving me a newfound confidence in my meat cooking abilities.

I got inspired so off I went on a meat cooking spree.  Next plan.  Pork tenderloin.

Back to my phone.  Google: "What part of the pig is pork tender loin?"  Answer: A cut of the loin.

Back to google: "Where's the loin on a pig?" Answer: The back.

I did another look through the case, found "Schweinerücken" and was good to go.  But wait, it looks a little big?  Is this tenderloin or loin?

Back to google.  It's the loin.  Not sure what German word I need to find next time to get tenderloin or if they even use that part of the pig, but if all we can have is the loin, that's fine by me cause it was good.

It was a little overdone, but very tasty.  The bacon on top I'm sure had a lot to do with that. Here's the recipe I used.  Definitely something I could try again.  And it made really great sandwiches the next day. 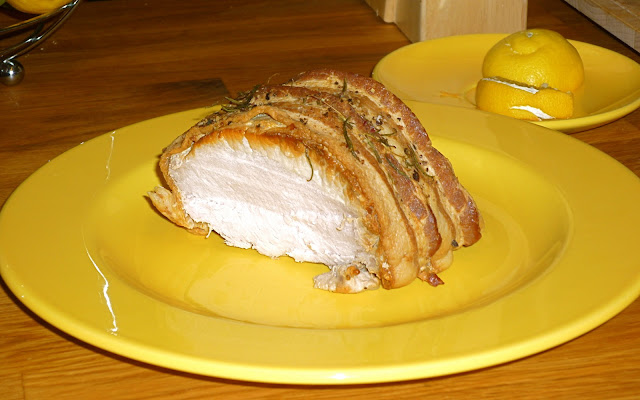 Still feeling confident I decided the next thing I would cook was brisket.  First step, figure out where the brisket is on a cow.


I learned there is no brisket on a cow.  I also learned it's not just spelled like biscuit with an "r".  I learned something else too. Something very important.  But you'll have to wait till the end for that one.


Brisket, is a cut from the chest of the animal.  In German that would be Rinderbrust, which literally means "cow chest." I really appreciate how simple German's name their meat.  It's so straightforward, so logical.


When I ordered my meat, the butcher told me that this particular cut was delicious in soup.  That should have been my first warning that maybe perhaps something wasn't quite right.


Having never actually seen a brisket raw before though, I had no idea.  I knew it was a tough piece of meat so I just figured after cooking it all day in the crock pot, it would magically turn into brisket.


Fortunately, it was not undesirable to eat, especially with a little BBQ sauce (go for Bulls-Eye...it has really great flavor and it doesn't have any high fructose corn syrup) so the meal wasn't a total loss.


Luis really liked it, but he was also starving so I think that skewed his judgement a bit. He probably would have eaten anything at that point.  Except onions of course.  Or mushrooms.  Or hummus.


So are you ready for it?  The most important thing I learned through this whole process:


Rinderbrust ≠ not brisket.  Doesn't even resemble it one bit.


Needless to say I will not be attempting brisket again.  At least until we move back to the States where I can just say "Brisket please" and I will get a brisket.


And from now on, when the friendly German butcher man says a piece of meat would be great in a stew, I should immediately stop all cooking plans and just make the stew.  Our taste buds will be much better off for it.

You're cooking more than chicken or fish! What? who are you! Haha I loved your venture into the other more manly meats, I am sure Luis loved it, wish I could be there to devour your yummy cooking!!