This morning we received the inevitable call from my grandparents that my great grandmother, Grammy, has gone to be with Jesus at the beautiful age of 92.


Early in December she had suffered a fall that left her with a broken hip.  After undergoing surgery, the doctors reported that everything was perfect and she would be better in no time.  Just a few hours later, however, we received a call that Grammy had not yet woken up from the anesthesia and her kidneys were failing.  It looked like she wasn't going to make it through the night.


The call was quite unexpected and hit us all pretty hard, especially after we had just received such positive news from the doctors. But Grammy, being the fighter that she was, rallied back, and despite a couple more moments of thinking she was near the end, she soon got herself strong enough to be transferred to a nursing home facility just a few weeks later where she had been receiving physical therapy to help her walk again.


It's hard to understand why the Lord allowed her to experience all that she did this past month, all the pain that she had to endure, and the difficulty it was for my grandparents who had to watch her suffer.  However, I know that God's timing is perfect and for reasons I'm sure we will never know or understand, He chose to call her home on this January morning of 2011.


Grammy was loved by all and will certainly be missed but we will forever cherish the memories we share with her in our hearts.  Here are just a few that come to mind as I reflect on the wonderful life of my sweet lil' Gram-Gram.

Grammy and Grampy used to take care of me while Mom and Dad were at work.  They would always take me to Smith's for a chocolate covered donut.  Sweet memories. 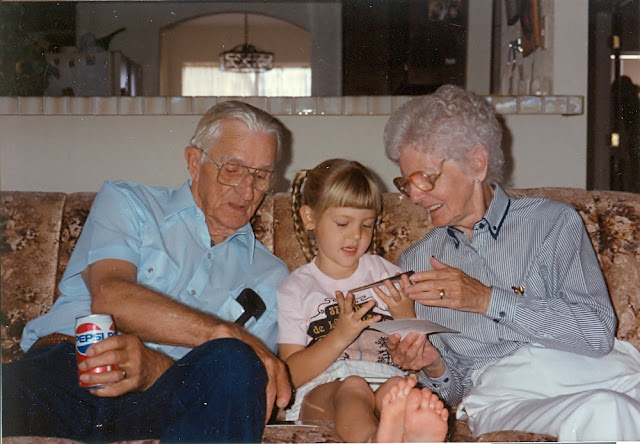 I feel so blessed to have been so close with Grammy. 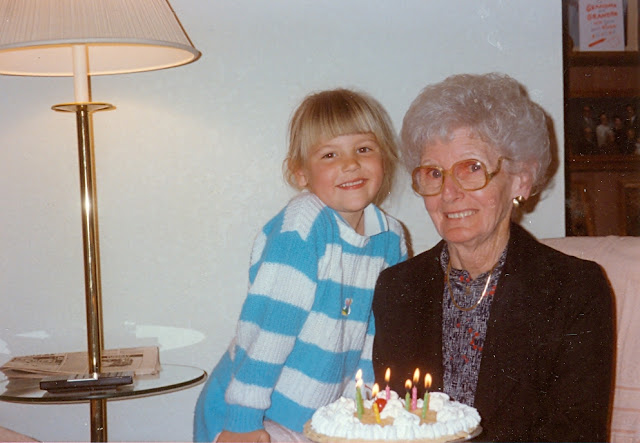 She always had a soft spot for us girls.  One time Riss was acting up when Grammy was over at our house so Dad took her to her room for a spankin'.  As soon as Grammy heard Riss cry, she started to cry as well.  She couldn't stand hearing her in pain. 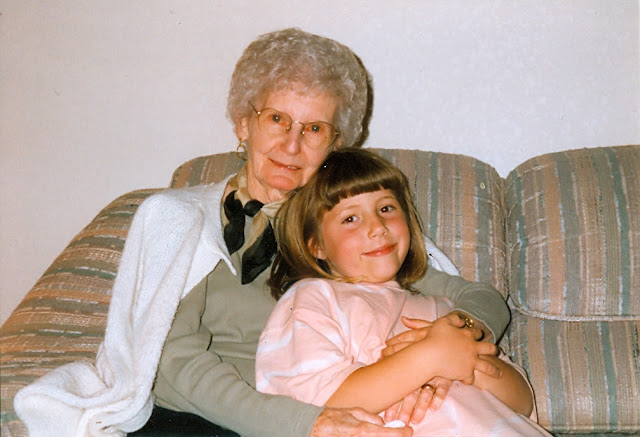 I know the Lord gave us a very rare and special gift when He allowed her to be such an active part of my and my sister's lives.  Here she is with me before my Senior Prom. 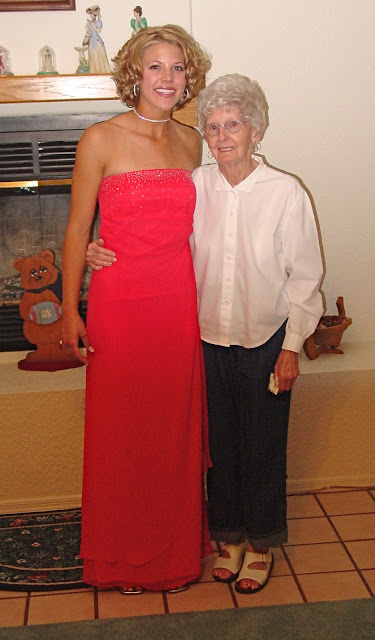 She supported us by being at every event she could.  She couldn't miss seeing Riss before Homecoming her sophomore year of high school. 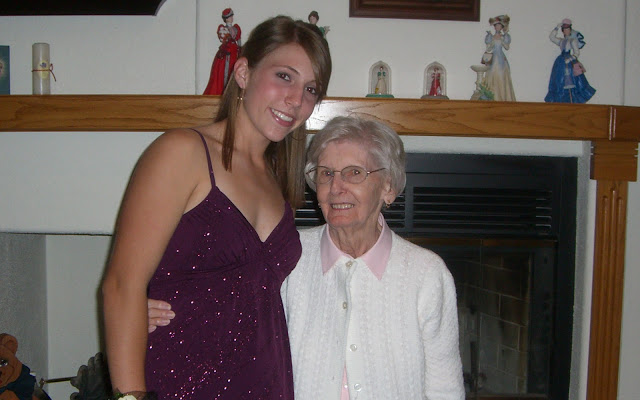 She was a lot of fun to be around and had this innocence that was so endearing. I remember last year, a few months after I had moved to Germany, I received a phone call from her in which she spent the first five minutes in complete shock and amazement that she had just *quote* called Germany *endquote*.
It was so much fun to hear the joy in her voice at the realization that she could dial a foreign country and chat with her great-granddaughter.  If only we had the chance to get her on Skype, how much fun that first conversation would have been! 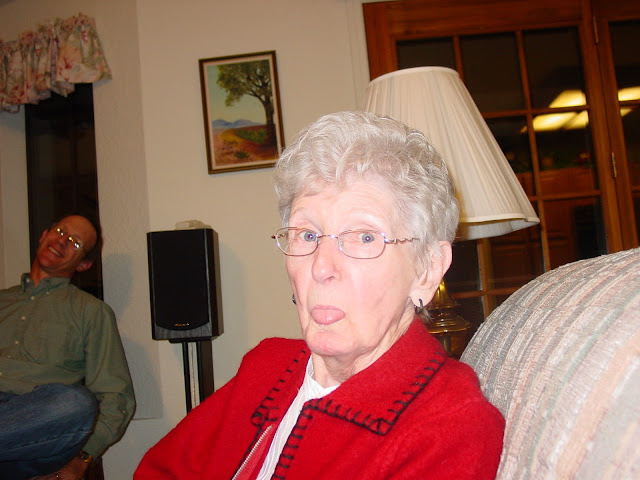 She was filled with joy and laughter. 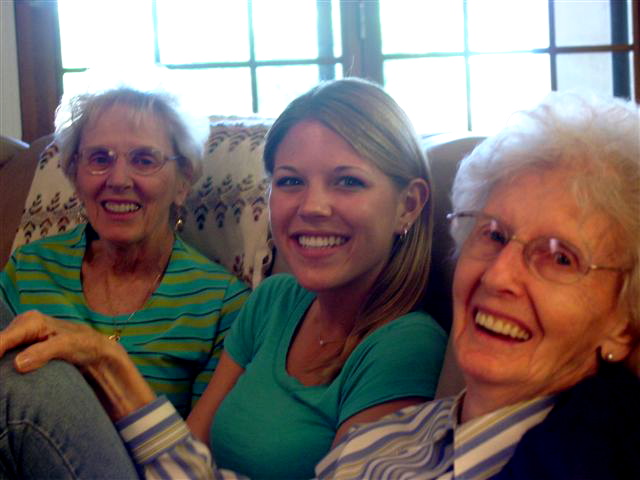 And had such a tender heart with lots and lots of love to give. 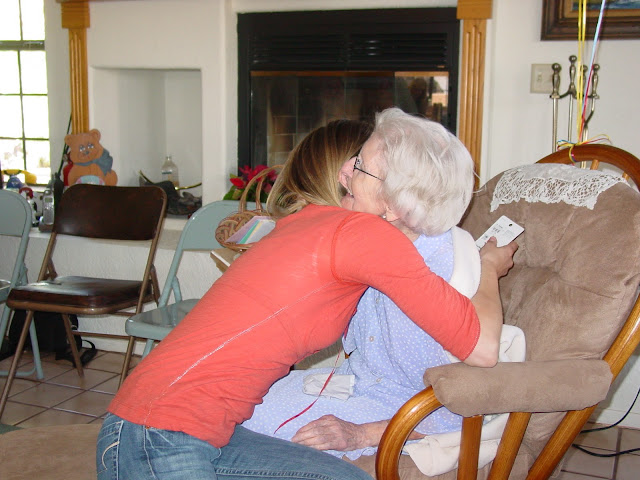 But she was tough too!  Here she is shoveling dirt at the groundbreaking ceremony for our church's first building.  She loved Thunder Mountain, and she especially loved the people that went there.  When she moved to Dallas she always talked about how much she missed her friends at TMCC.  You all definitely touched her life in a big way! 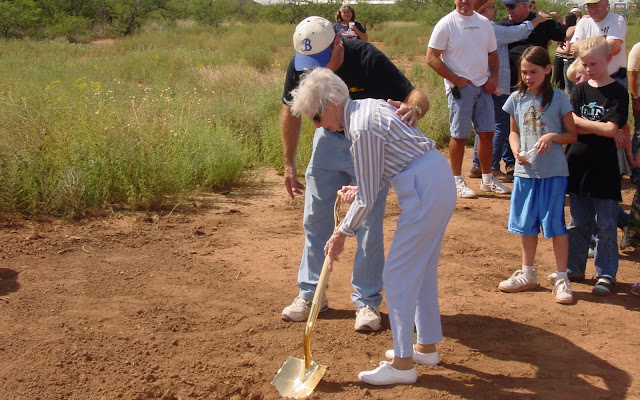 And she touched ours as well.  When we held a big bash for her 90th birthday, friends and family flew in from all over the country to celebrate her life. 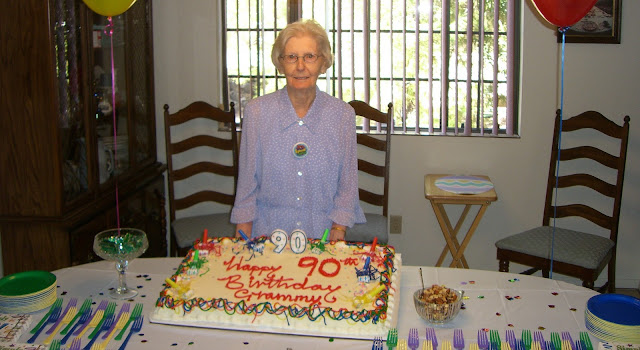 Four generations of Youngbloods came through this tiny little lady. 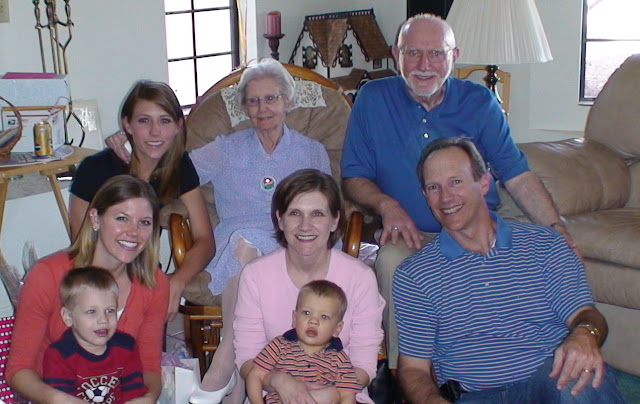 This was Grammy's favorite chair to sit in whenever she came over.  We were ready to escort her to it the moment she arrived. 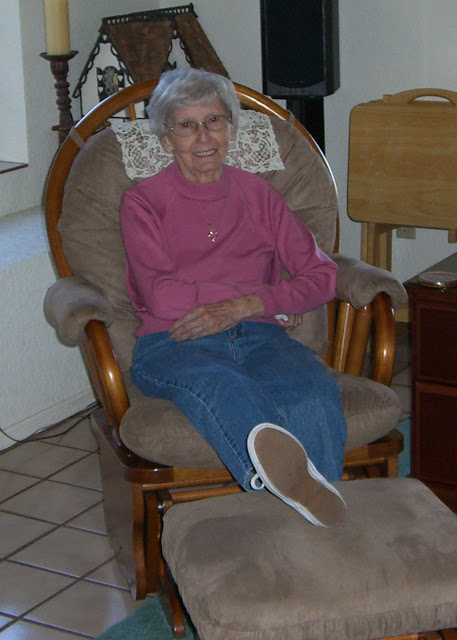 This summer we took a trip to Dallas to visit Grammy so that she could "meet" Luis.  I say "meet" only because she had met him several years ago but clearly didn't remember it because she kept insisting that she get to meet him someday.


We gave up trying to convince her that she had already met him and had fun playing along as I "introduced" Grammy to my awesome husband :)


She, of course, loved him immediately.  In fact, even before she had "met" him she would tell me to tell him that she loved him.  She was so sweet and caring. 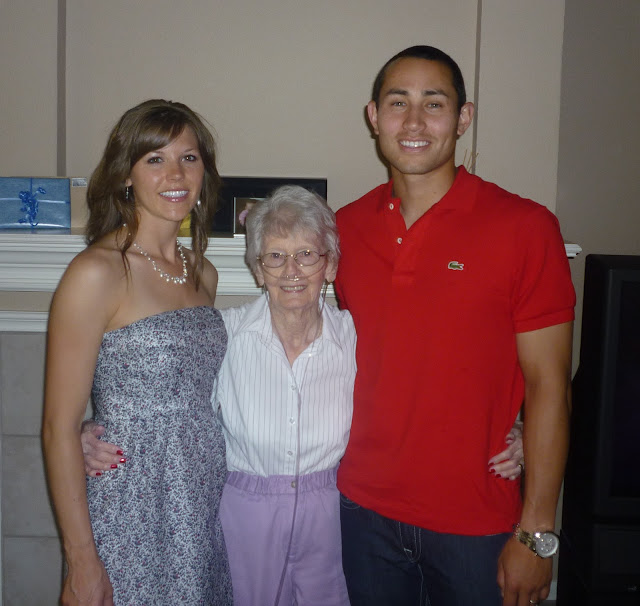 In October, we all gathered together in Dallas to celebrate my grandparents' 50th wedding anniversary.  It was a bittersweet moment as we knew it would most likely be the last time we would get to be with our sweet lil' Grammy.  How grateful I am for the chance to have seen her one last time for such a joyous occasion. She looked beautiful and classy as always. 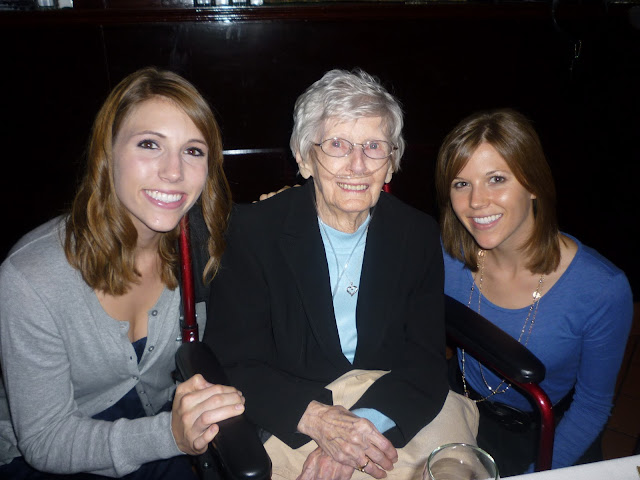 Things I will miss about Grammy: 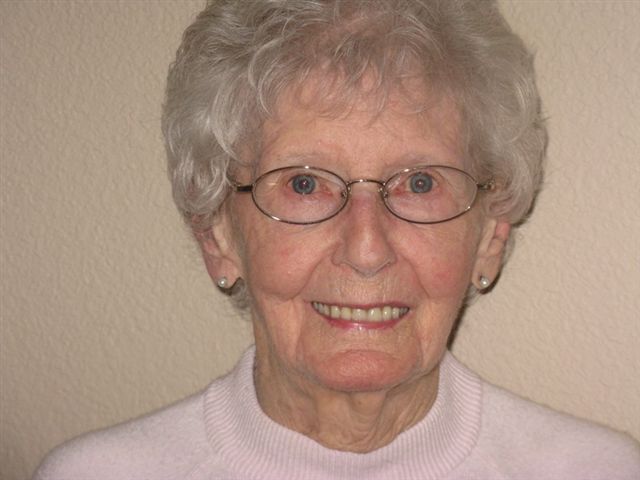 Despite all that I will miss about her, I am so grateful that she is free of the pain of her body and that she was welcomed into the arms of Jesus as she heard those words we all long to hear, "Well done, my good and faithful servant."
We love you Grammy!  Thank you for all the wonderful memories you gave us.
Posted by Cara at 9:00 AM

I loved this Cara. Thank you for sharing your special moments with everyone. As you said to me before... I'll never forget playing with our cow girl dolls with Grammy... and making our "ice cream soup". Love you! <3

What a beautiful tribute, she must have been very special! Thank you for sharing, we look forward to reading your blog! Sarah Ballew

Wow! Cara you did such a wonderful job writting this blog about your GREAT grammy. :) I think its amazing how she got to watch you grow up to the beautiful person you are. I especially enjoyed the part were you tried to convince grammy she had met luis before. Thanks for shareing your story. Love you.
anita.

I held her close in life and will hold her close forever; she was a captivating person and gave out so much love...I miss her so very much and was privileged to have known her as I did. Beautiful tribute to a very God fearing woman...I know she'll be waiting for you with our sweet heavenly Father! Melly